All Articles Logic Pro
Apple Logic 9: Adding Variation to your Beats and Loops
Rounik Sethi on Fri, August 27th 2 comments
Language
Logic Pro 9 comes bundled with a huge number of loops and presets and patterns for it's drum synth/sampler, Ultrabeat and the EXS24. One of the problem with using loops (and even your own recordings

Logic Pro 9 comes bundled with a huge number of loops and presets and patterns for it's drum synth/sampler, Ultrabeat and the EXS24. One of the problem with using loops (and even your own recordings) in your projects is the lack of variation. In some styles of music having the same beat throughout your song might sound great... but what if it eventually grates on the listener? Well, one solution is in the mixing stage. Using automation to emphasize parts of your arrangement (by automating levels and effects) might be enough. But often during the arrangement process you may want to create your own variations of patterns and rhythms too.

Manipulating MIDI patterns (e.g. Ultrabeat patterns or other Green Apple Loops) is easy in the Piano Roll or using the Transform window, but if you have an Audio loop, there are a couple of quick techniques that can help too.

In Logic 9, you can effortlessly convert your audio loops into sampler instruments for the EXS24. Not only does Logic analyze the audio file and maps each transient of the audio region to the sampler instrument for you... it also creates a new track with the Sampler Instrument and even places a MIDI region on that track with the original pattern intact! Now you can use any of Logic's MIDI editors to easily re-arrange the pattern.

For more info on how this feature works check out this earlier Blog post on "Convert to New Sampler Track". 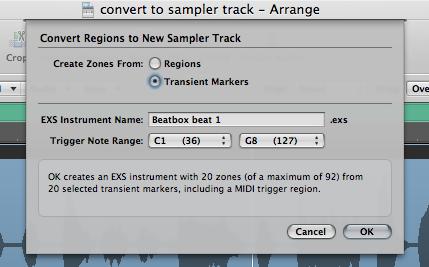 
One of my favourite and most used techniques to add variation to a loop is to cut up the region into equal segments and then shuffle the regions (like shuffling a pack of playing cards!) Here's how...

First, get your region, in my case a drum loop and select the scissors tool.

Hold down the Option key and click with the scissor tool at the first point within the region where you'd like to begin creating equal segments. For example, to create multiple regions (each being 1 beat in length) Option-cut on the first beat of the region.

Now you have a region divided into equal segments. To make this demonstration for shuffling easier to understand visually, I've colored each of the regions (from dark red on the left to a shade of blue on the right).

Switch the Drag mode in the Arrange area to Shuffle L. Shuffle modes are very powerful and one of their uses is to swap regions by dropping them ontop of each other. The regions will automatically shuffle or align themselves to the next region border (in those mode to it's left). Overlap mode is disabled when in Shuffle mode...

Try it out by dragging a region within the cut-up loop on top of it's neighbour, or one of the other segments. With just a few drags you'll have created sonic variations! 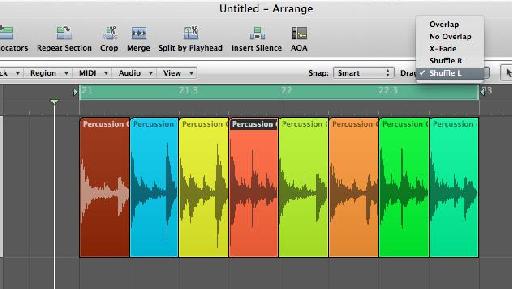 Remember to switch the Drag mode back to Overlap or No Overlap once you're finished shuffling your regions!

This is just one method you can use to add variations to drum or melodic parts in Logic. Try experimenting with non rhythmic loops or your own recordings for some very interesting effects. If you are experiencing pops and clicks between each audio region consider adding a gentle crossfade between the regions.