Adding reverberation and ambience to recordings has been a part of audio production for as long as anyone can remember. Before the advent of mechanical reverb devices, real acoustic chambers'"basically, dedicated empty rooms'"were rigged up with speakers and microphones, to capture natural room tone. Mechanical plate and spring reverbs ruled the roost for many years, in the analog era, until digital reverbs came along. Nowadays, most of us get our artificial reverb from plug-ins, and every DAW includes one or two.

A Feast of Reverb

The most traditional type of digital reverb generator is an Algorithmic reverb. The reverberation'"the multiple delays and simulated reflections'"are generated from the input signal, and shaped by algorithms (formulas) into patterns that emulate the sound of various acoustic spaces. Users will find controls for the specific parameters, like initial delay time, early reflection pattern, decay time, diffusion and density, etc. A more sophisticated take on artificial reverb would be modeling reverbs, where the formulas simulate the physical components of real spaces'"the user can specify aspects like room dimensions, room shape, surface angles, surface treatments, and the like, to dial up the desired ambience. 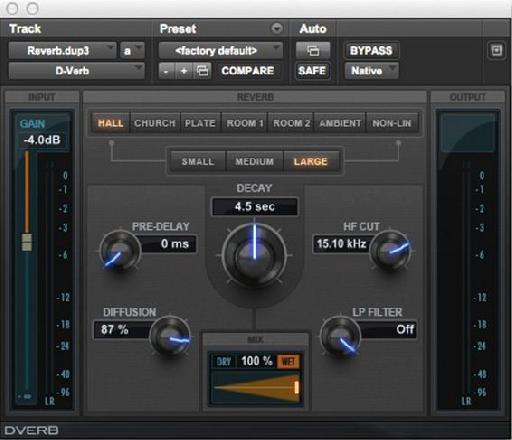 A typical algorithmic reverb, with its various controls for shaping the reverb sound

Nowadays the artificial reverb created by these plug-ins sounds excellent, but there is a third type of reverb processor that offers something a little different'"convolution reverb. A convolution reverb is a sampling reverb'"just as virtual instrument samplers offer more realistic acoustic instrument emulations by utilizing audio recordings of notes from the real thing, convolution reverbs bring an extra level of realism to reverb by utilizing recordings of actual physical spaces. So, instead of simulating the sound of a generic small room or concert hall, as with artificial reverb generators, a convolution reverb can offer the actual sound of a specific room or hall'"what your tracks would sound like in Carnegie Hall, or the tracking room of some famous recording studio. This brings reverb to a new level, for applications from matching the ambience of live recordings or video/film location sound, to simply providing the most natural-sounding room tone possible for music in any genre. 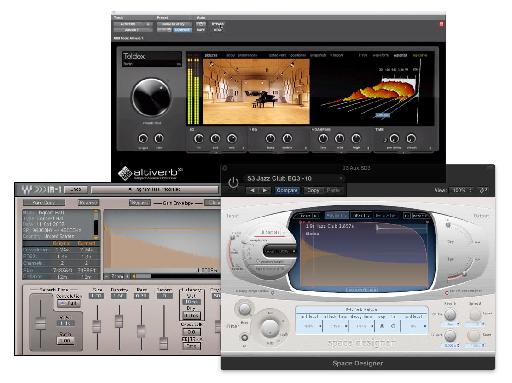 A convolution reverb makes use of an audio recording of the response of a real acoustic space. Specifically, this recording is an audio sample of the response of the acoustic space to a full-range audio stimulus'"a burst of noise, like a loud click, gunshot, or even loud balloon pop. The resulting audio file is called, appropriately, an Impulse Response, or 'I.R.' for short. To generate reverb, an IR is chosen, and loaded into a convolution reverb plug-in (just as audio samples are loaded when choosing an instrument in a sample-based virtual instrument). When audio (from various tracks) is passed through the convolution reverb plug (usually via a standard Send & Return hookup, but optionally in-line as well), the plug-in multiplies each sample of the incoming audio by each sample of the IR'"that process is called convolution. The math aside, the end result is that the audio now sounds like it would if it was in the actual space of the IR recording, and voilÃ !'"real, natural room tone.

Convolution reverbs, like Logic's included Space Designer reverb, are simple to use, and though they do demand a little more of your CPU resources than some other plug-ins'"in the early days this was an issue'"these days DAW computers have more than enough juice to run multiple instances of convolution reverbs without any trouble at all. 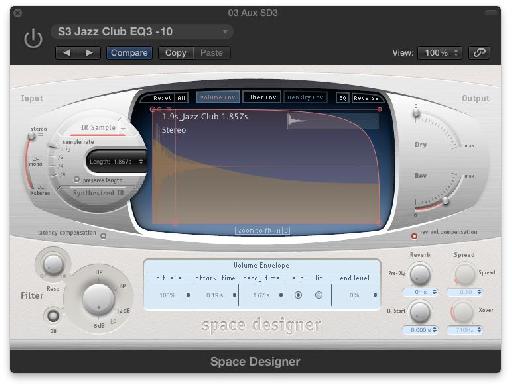 In operation, they're a little different than traditional algorithmic (or even modeling) reverbs. Those methods allow the user to shape the reverb/ambience with a collection of controls, as described above, to customize all the key aspects of the reverb sound'"again, initial delay time, early reflection pattern, decay time, diffusion & density, etc. But since convolution reverbs are based on a sample of a real space, many, if not most, of those parameters are part of the recording itself, and therefore not adjustable. Critical components like Early Reflection patterns (which define the size and character of the space) and diffusion/density of the reverb, are, as expected, not tweakable with a recorded sample of a real space. But there are usually some adjustments available. Initial delay can always be added, and Decay Time (aka Reverb Time, or RT60) can be changed'"re-shaped, with an an envelope, sometimes, and shortened, but, of course, not lengthened. Filtering and EQ can be applied (and also sometimes shaped) to fine-tune the tone of the ambience. And various other tweaks, like stereo width and even reverse playback (for special FX) are often available. 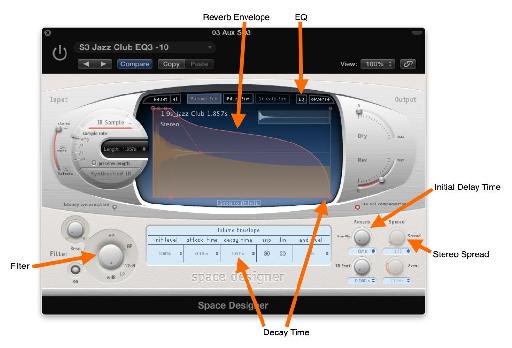 Some of the adjustable parameters of Logic's Space Designer reverb.

Since convolution reverb is based on samples (IRs) of real spaces, most come with an extensive library of samples, which can range from general-purpose spaces like halls and rooms of various sizes and shapes, ranging from large to cavernous spaces (concert hall, church, airplane hangar) to medium-sized rooms (recital hall, club, studio) to smaller ambiences (vocal/drum booth, bathroom, telephone box).

There are also usually samples of classic mechanical reverbs (plates, springs, tape echoes), and also a variety of special effects and other types of IRs (see below). My example, Logic's Space Designer, comes with hundreds of IRs, and, since IRs can be just regular audio files, there are many places to get more, even free, IRs'"just google 'Impulse Response download' and you'll find tons of them.

But you can also make your own IRs, if you're feeling adventurous, or if you want (or need) the sound of a particular space. Many convolution reverbs come with software for creating Impulse Responses'"Logic includes their Impulse Response Utility, which makes simple work of rolling your own reverb samples. 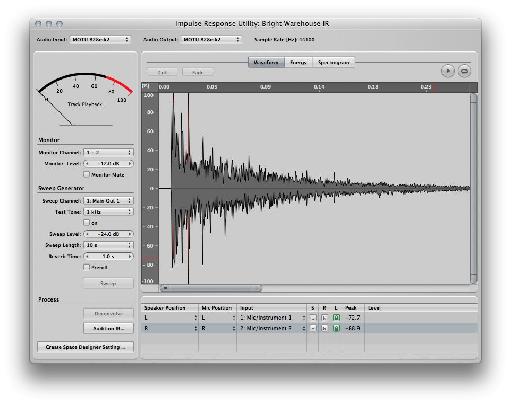 The Impulse Response Utility that comes with Logic.

You'd set up microphones (at least two, for a proper stereo IR) in the space you want to record. You'll need a sound source for the 'Impulse''"the Utility provides a click, or, as is more commonly used these days, a sine Wave Sweep (which yields technically better/cleaner results), so you'll want to set up a full-range loudspeaker to play the Impulse/Sweep. Point the speaker and mics away from each other, into the room, and hit record. The Utility will strip (deconvolve) the original Impulse/Sweep out of the recording, leaving just the room sample audiofile'"the IR'"which can then be loaded into your convolution reverb... and Bob's your uncle!

More than the Room

But convolution reverbs are good for more than just reverb and ambience. IRs don't have to be just music rooms or acoustic spaces, they can be anything. Audio Ease has a convolution plug-in (Speakerphone) that's dedicated to special effects, and one really popular application for convolution processors is to capture IR samples of the sound of various guitar amp cabinets, to provide a more realistic tonal balance for virtual amps. 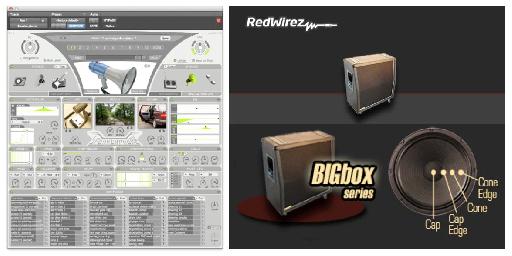 I've used IRs of piano-lid resonance and samples of the inside of an acoustic guitar to add depth and air to sampled pianos and DI'd guitar tracks.

Listen how 2 IRs of piano-lid and guitar body resonance can add depth to sampled or dry recordings:

So, whether you choose IRs of rooms, spaces, or other effects, from the reverb's library, or roll your own, convolution reverbs are capable of providing the most natural, most realistic, ambience of any type of reverb device. While you may sacrifice some tweakability, it's more than made up for by the quality of sound. But remember, with convolution reverbs, sound quality is all about the IR'"load up a poor recording, and you'll get weak results; use a good IR, and you can bask in the rich ambience of your favorite music spaces!