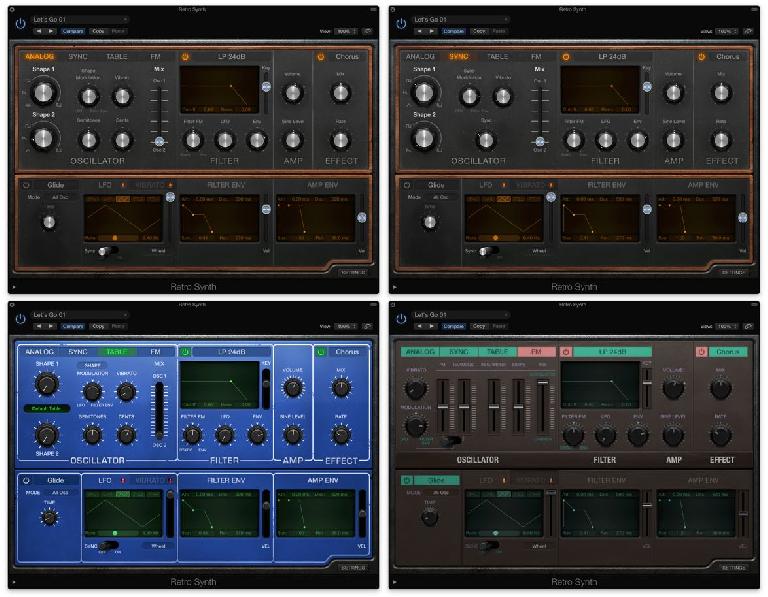 The pared-down interface varies slightly for each synth type. The Analog module covers all the traditional bases, like you’d find in synths like the classic Minimoog: dual Oscillators + LFO, a multimode Filter, amplitude and filter Envelopes, a collection of Modulation options, and a couple of basic Effects (chorus/flange). The other modules share most of these, with most of the key differences in the oscillator sections. The Sync module’s oscillator has the appropriate routing to create the unique hard-sync effect. The Wavetable module’s oscillators have the same controls as the analog module, but the waveshapes are different—typical of what what you’d find in classic wavetable synths like the PPG (suggested by that module’s skin). The FM section, naturally, has significantly different oscillator features—not exactly the layout familiar from the DX7 (which clearly inspired the graphics here), but a number of options for generating waveforms characteristic of classic FM synthesis. For this article, I’m going to cover creating a classic sound with one of these synth types—since it may be a little less familiar than some of the others, I’ll describe making a (Hard) Sync sound. 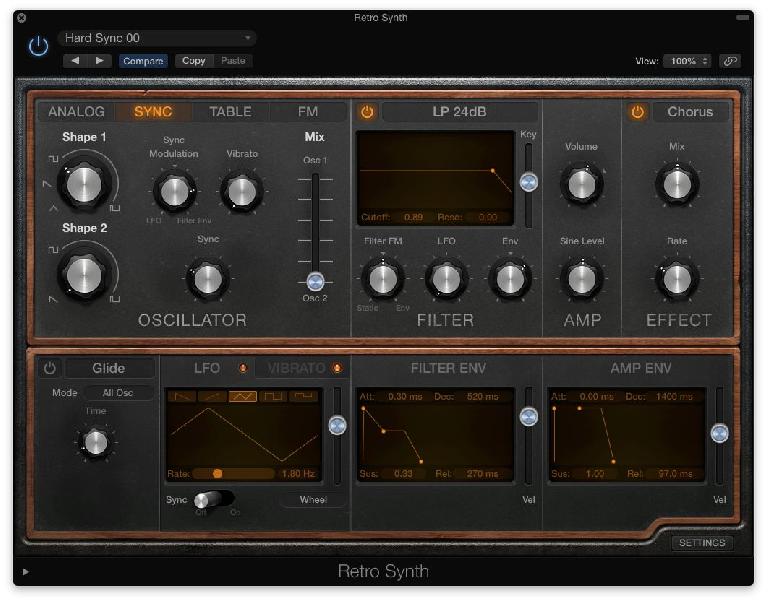 Analog oscillator Sync has been around as long as analog synthesizers have been, but it’s probably not as familiar as other analog synth effects, like frequency or amplitude modulation. Like ring modulation, it’s capable of creating much more complex and interesting waveforms than the traditional filtered sawtooth, square, and pulse waves that provide the character of analog synth sounds.

To create a classic hard sync sound, the action is mostly in the Oscillator section (which creates the new, more edgy wave), with an optional assist from modulation, like an Envelope Generator (which would lend shape to the sound). A hard sync effect typically uses two standard analog oscillators, like the pair in Retro Synth. One oscillator is slaved to the other, and, depending on the relative frequencies of the two, a new wave results, with a more complex shape, and overtone content that would not normally be possible with the traditional analog oscillator shapes. Here’s how it works.

Instead of simply blending the two oscillators and de-tuning one for a little chorusing (as you would in the Analog module), in a hard Sync patch, one oscillator (here in Retro Synth, Osc 1—“Shape 1”) is used as a trigger (or Master), to control the other (Osc 2—“Shape 2”), the Slave. Usually, only the Sync’d (Slave) oscillator is present at the output—here, you’d simply set the Mix slider all the way down, to Osc 2. Any of the traditional analog oscillator waveshapes (Sine, Sawtooth, Square, Pulse ) could be used, but it’s common to choose a Sawtooth wave, which will provide a rich harmonic structure as a starting point, for the oscillator that’s being Sync’d (the Slave), and a Square or Pulse wave for the Master oscillator. In a modular synth, you’d have to patch this Master/Trigger-Slave/Sync connection, but it’s hard-wired in the Sync module in Retro Synth.

When a note is played, every time a new wave cycle begins in the Master oscillator, the Sync’d Slave’s wave is forced to restart, no matter where in its cycle it is. This does two things. It forces the Slave oscillator to the same pitch as the Master—this means that in any Sync patch, the Master controls the pitch of the sound, following notes played on the keyboard. It also affects the shape (and so the tone) of the Sync’d wave (Shape 2). But exactly how the waveshape is affected depends on the relative frequencies of the two oscillators.

When the Master oscillator’s frequency is higher than that of the Slave (Sync’d) wave, you’d mostly just be raising the pitch of the Slave, with little tonal variation. But if the Master’s frequency is lower than the Slave’s, then things get more interesting. As the Sync’d Slave cycles (360° per cycle), it will be interrupted each time a new cycle begins in the Master, cutting the Slave’s cycle short at that point, wherever it is, and starting again from the beginning (0°). 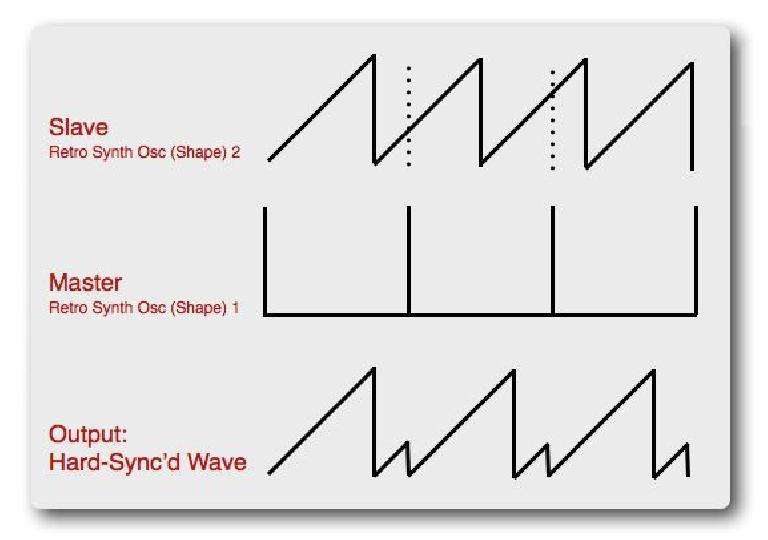 As you can see from the diagram in Fig 3, this will produce more complex shapes—the additional sharp edges produce additional overtones, yielding the characteristic edgy tone (referred to by some as “tearing”) of Hard Sync. Fig 4 shows actual oscilloscope traces of this in Retro Synth; note that the original Sawtooth wave is not a pure Sawtooth to begin with—as you can see, there’s a little analog “character” added.

Fig 4 A Sawtooth wave (Shape 2) in Retro Synth being Hard Sync’d by a Square wave (Shape 1).

As the frequency of the Master is changed, so is the resulting waveshape, and the tone, of the Sync’d Slave. So if you sweep the Master’s frequency, you’ll get characteristic hard sync tonal variations. But you notice there are no oscillator pitch or tuning knobs in the Sync module—instead this is handled by the “Sync” knob. Adjusting this will change the waveshape and tone (as you can see in Fig 4, this was what I did to generate the different Sync waveshapes).

For a more musical—more playable—response, the Sync knob could be assigned to a controller (like Modwheel) in Retro Synth’s Settings panel (Fig 6).

But you could also assign Modulation right in the Oscillator section itself, with the Sync Modulation knob. To the left, it will put the depth of the Sync effect under the control of the onboard LFO; to the right, Sync will be controlled by the Filter Envelope. To me, this is the most classic Sync patch—each note is swept by the Envelope, for a classic Hard Sync tone. (An often-cited example of this in context is the song “Let’s Go”, by the ’80s band The Cars.)

If the hard-sync’d tone is too bright/edgy, you could dial down the edge with the Lowpass Filter, and even simultaneously use the Filter Envelope to control the LP Filter Cutoff (Fig 5). A little chorusing or flanging could add some thickness, and you can utilize the oscillator detuning and stacking effects (hidden away in Retro Synth’s Settings panel) to subtly fatten up the patch even more (Fig 6). 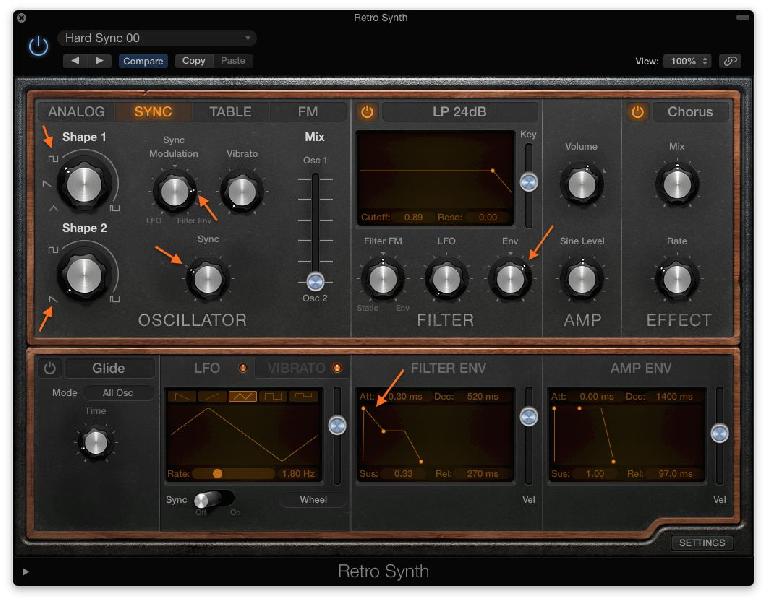 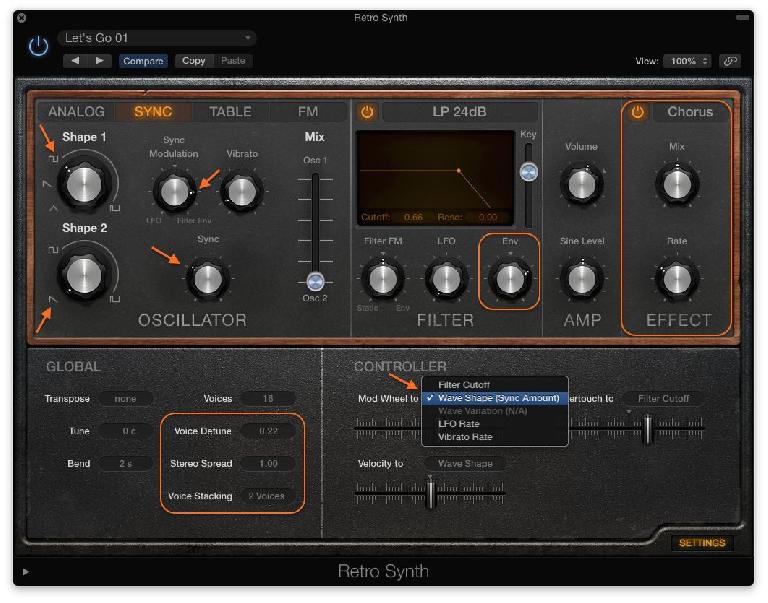 So that’s how Hard Sync works, and how Retro Synth implements this classic synth effect—another tasty addition to its bag of tricks.

Click here to explore all 4 modes in Logic's Retro Synth in this video course. 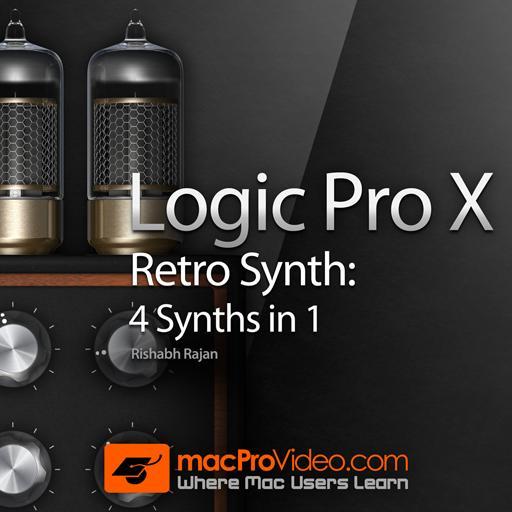