All Articles Logic Pro
Creating Dubstep wobble-style bass lines in Logic
Gary Hiebner on Wed, March 23rd 3 comments
Language
Dubstep is all the rage with its big wobble sounds. This pseudo style is a mixture of Dub Reggae, 2-Step, Grime with elements of Drum 'n Bass. Join Gary Hiebner as he shakes it up in Logic Pro.

What really stands out when listening to Dubstep are those huge "wobble" bass lines. They can actually be created quite easily using Logic's ES2 Virtual Instrument and, with some automation added to the recipe, you can really create some interesting DubStep synth lines in your productions.

First instantiate the ES2 on a Software Instrument channel. Under the presets choose the Analog Saw Init under the 12 Tutorial settings sub-menu. This is a basic Saw wave synth sound which we will build on to create our DubStep bass lines. 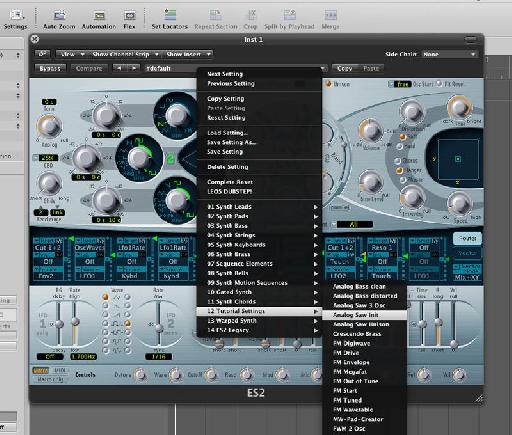 Here I have created a very simple bass line because most Dubstep bass lines are in fact very simple in nature. It's really the LFO automation that fills up the bass line track and creates the interest.

Next we are going to create those wobble sounds that are heard in Dubstep synth lines. These are created by using the ES2's LFO's and the ES2's Modulation Matrix menu. The Modulation Matrix menu is a very handy area in the ES2, and can really bring your sounds to life while adding some interesting movement too. First let's choose what we want the LFO to modulate. In the Modulation Matrix on one of the channels, in the Target choose: Cut 1+2. This will modulate both the cutoffs of Envelope 1 and 2. In the Source field choose LFO2. We are choosing LFO, because it allows you to change the rate divisions of the tempo such as 1/8 and 1/16T notes.

Set the LFO2 here to Â¼ notes. Here you can hear a slight wobble to the bass line. 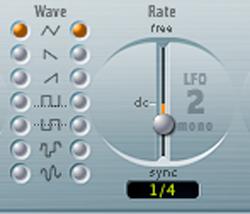 Example of ES2 with LFO:

Let's spice up the bass sound as it sounds a bit flat. So, activate the other oscillators and choose some different waveforms. For Oscillator 2 choose a square waveform and detune it down an octave to add more low-end to the bass sound. On Oscillator 3 choose the variant Saw waveform. In the Triangle Mix window, mix the three sounds till you have found a sound you like. 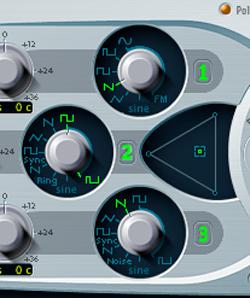 Step 3 - get those Wobbles Moving

Now it's time to add some automation to the LFO to accentuate those "wobbles". 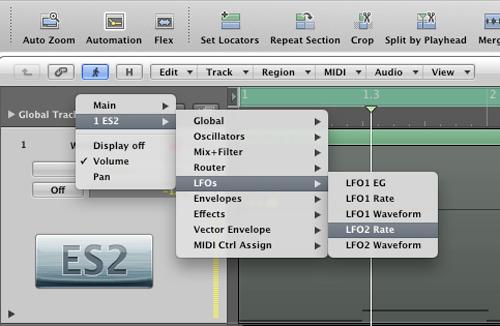 Open up the Automation lane (View > Track Automation), and then choose the LFO2 Rate parameter from the ES2's Track Automation drop-down menu. Next, draw in some automation while you are listening to the bass and notice how you can change the rate of those wobbles. These wobbles don't need to repeat themselves. Dubstep allows you to be quite experimental, so you can go crazy with the automation.

Example of LFO2 Wobble with Automation:

You can take it one step further and even automate the pitch of your bass to create even more interest with the sound. In the Modulation window we have chosen Pitch123 from the Target menu to pitch all the Oscillators (1,2 and 3), and we have chosen LFO1 this time as the source to modulate the pitch. You can go crazy with this. Use the Touch automation mode and move the slider in the modulation matrix to draw in the automation while the track is playing. Take a look at Mo Volans' article to get a better grip of Logic's different automation modes. 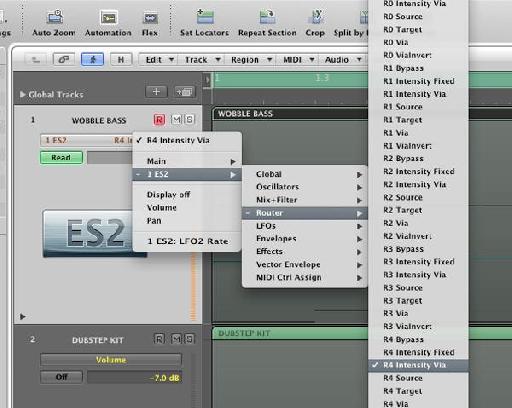 This alters the ES2's Router R4 Intensity via automation field:

Step 5 - Double and Dirty up that Wobble Bass

To dirty up this bass sound more, duplicate the bass channel strip with the same settings. Then add some pedal boards distortion pedals, the Overdrive effect, and Ring Shifter plug-in to really grime up this sound. Mix the two bass sounds together until the levels of each sound good. 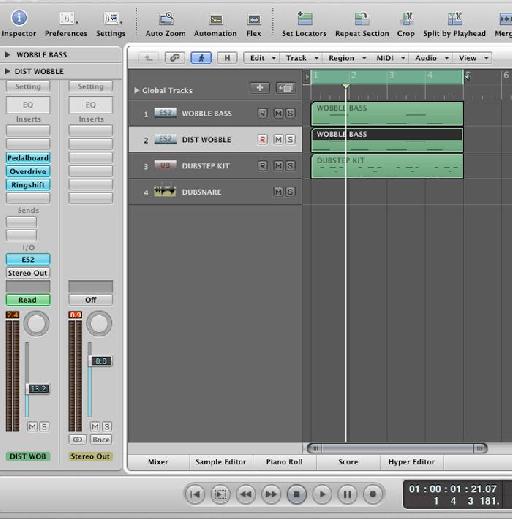 Dubstep beats are quite simple. The snares are more often than not on the 3rd and 7th. Here is the beat I created. These beats may be simple, but they allow the wobble bass lines to be busy and crazy, and they open up space in the mix for these Dubstep lines.

And now here is the Dubstep Loop and Grimey Wobble Bass Line together:

If you wish to get deeper into the ES2, check out Steve Horlick's tutorial on the ES2 Exposed.

If you wish to polish up your electronic productions also check out Olav Basoski's tutorials on Producing Electronic Dance Music.

So get in there and wobble and grime up those bass lines. Have fun!