Tremor has a couple of really cool features. The first is that its sequencer is polyrhythmic. This means each lane of the sequencer is capable of looping at different lengths. '˜Track 1' could be set to loop every 2 beats while '˜Track 2' could loop for say five 16th notes, etc. This means you can produce overall loops that are constantly changing and evolving and may never play the same thing twice! I thought maybe this might be cool for '˜other' sounds unavailable in Tremor! Light bulb!!

So Tremor has this cool sequencer. Unfortunately you can't export MIDI files from it. This is down to the polyrhythmic nature of the individual tracks. As a plug-in, Tremor can't transmit note data in Logic either (a drawback of Audio Units). So why not use Tremor as a standalone application and play the notes from the sequencer into Logic? That sounded like a good idea!

Here we can see Tremor in standalone mode. I'm not interested in the sounds, just the MIDI for now, so I've set the OUT to zero. I've set up some totally random sequences on all eight lanes. I've set the lengths by dragging the triangles for each lane. These will output MIDI notes C1-G1. 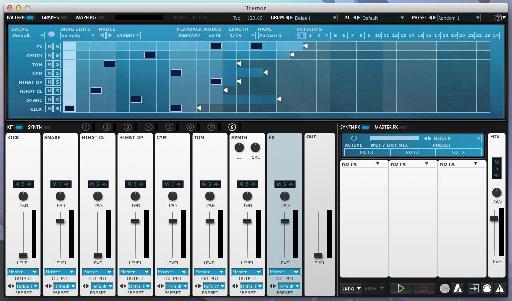 The next step was to get this sequencer data out of Tremor and into Logic. I can do this using the IAC Bus. This stands for Inter Application Connection and allows MIDI to be transmitted from one app to another. You'll find this in the Audio MIDI Setup application. Double-click the icon and make sure Device is Online is checked. 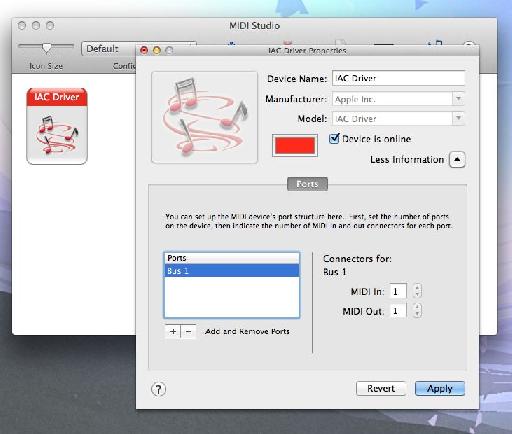 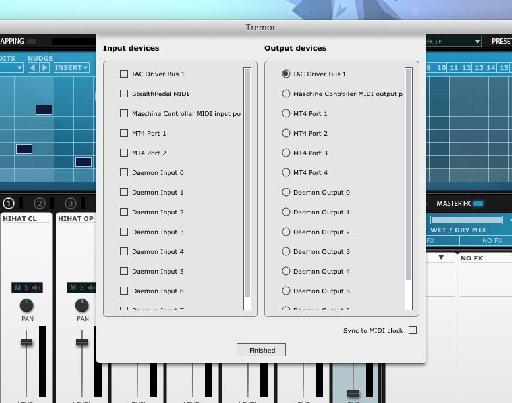 In Logic I can see the IAC Bus as a MIDI input in the '˜Clicks & Ports' layer of the Environment. 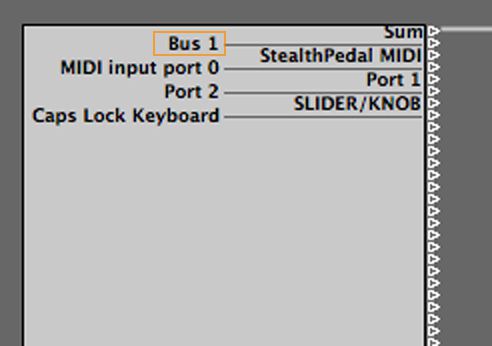 If I press play in Tremor, I can see the MIDI coming in. 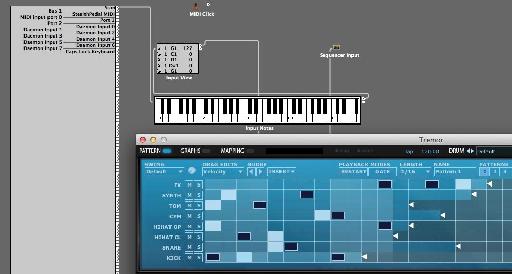 So if I set up a Stylus Kit (which is mapped from C1-G1) on an Instrument track and play Tremor I get an immediate result. 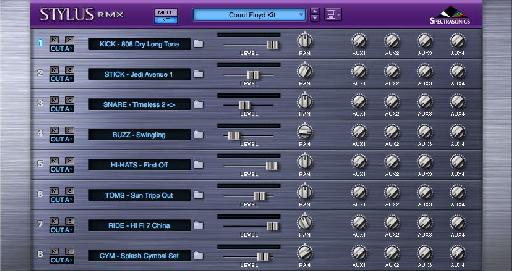 Bearing in mind the notes were totally random the result was to my liking! :)

So presently Tremor isn't synced to Logic which isn't much use. So how would I do this? First off I checked the Sync To MIDI Clock in Tremors Midi Prefs as it seemed like a good place to start. 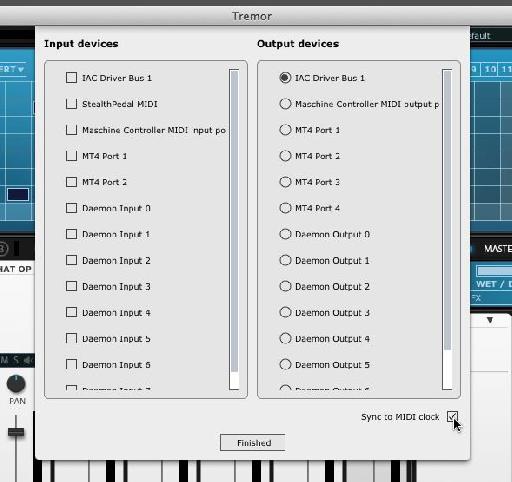 I set up MIDI clock to transmit out of Logic by going to Project Settings > Synchronization > MIDI and selecting the IAC Bus as the destination. 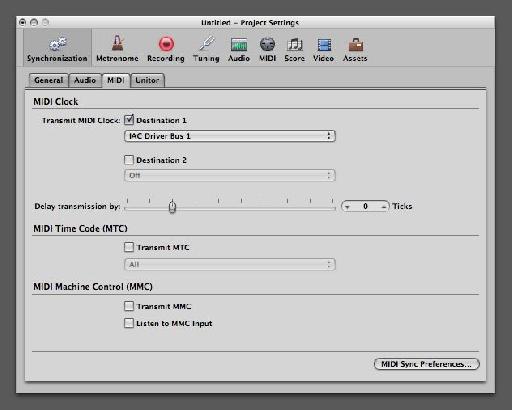 I then activated the IAC Bus as a MIDI input to Tremor. 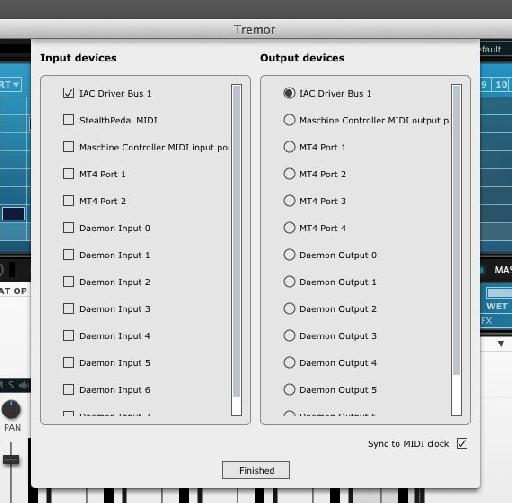 When I hit play in Logic, I noticed two things. Firstly it worked and Tremor was running. The second thing I noticed was the ear shattering noise caused by the feedback loop I had created in the IAC Bus!! Basically the notes were coming out of Tremor and going straight back in. Don't do this!!!

So after a few minutes of head scratching I remembered a nifty solution. Just create another IAC Bus! Yes you can have more than one! You can do this by clicking the + sign under the Ports section. Rename you new Bus and off you go! So now in Logic I set the MIDI clock to come out of IAC Bus 2. 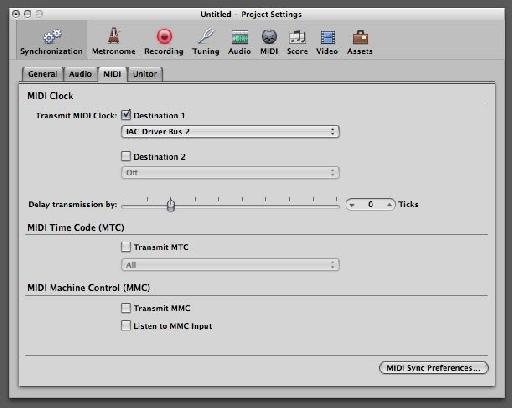 So I needed to reboot Tremor for it to see the new IAC Bus. I made sure to save out my pattern as a Preset. 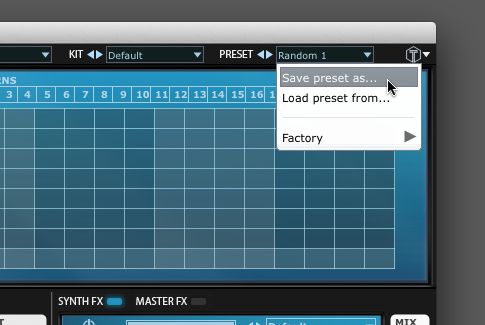 Upon reboot my second IAC Bus was showing up in the MIDI input section. Low and behold the apps synced up when controlled by Logic and there was no feedback loop! Good stuff.

Record Some MIDI In

So now I recorded the incoming MIDI on my Stylus track as I wanted to try something else out. You can see the overall randomness to the pattern.

I then set up another random pattern in Tremor. Now it was time to try something more melodic.

So MIDI notes C1-G1 don't give you much option when it comes to melodic ideas so I needed to remap these. This was easily done in Logic using a Chord Memorizer inserted before the Sequencer Input.

In keeping with the random vibe I remapped the incoming MIDI to random notes inside G minor as that was the overall tonality of the drum track. I then went straight ahead and recorded this MIDI in Logic alongside the drums. Here's the resulting MIDI. Another cool result! So I repeated this idea a few more times then again using some longer sounds. In some cases the incoming MIDI was remapped to chords in the key of G Minor to create some extra harmony. Here's the result.

For something that wasn't preconceived musically (except for adhering to a set of musical rules, namely notes in the key of G minor) I thought it actually came out, well... quite musical! It kind of reminds me of something from Resident Evil. As an experiment I thought it went OK and something I'll use again.

If you like the idea of this and own Reaktor you may want to try out Spiral (in standalone mode) which can generate random MIDI patterns (which can be tuned to a scale) and synced and input into Logic using the same techniques. Another great plug-in for this type of random thing is Axon by Audio Damage although outputing the MIDI is more problematic on a Mac, though not impossible with something like Bidule.

Anyway try it out if you have Tremor. Sometimes not knowing what you're doing is a good thing!