All Articles Logic Pro
Creating Glitch Style Stutter FX in Logic - Part 1
Rounik Sethi on Wed, November 17th 4 comments
Language
One of the most famous experimental glitch artists today is BT. His album "This Binary Universe" is a favorite in my collection and features carefully crafted microsounds that stutter in and out of ti

One of the most famous experimental glitch artists today is BT. His album "This Binary Universe" is a favorite in my collection and features carefully crafted microsounds that stutter in and out of time - sometimes speeding up and other times grinding to a halt. Meanwhile the other sonic elements and rhythms continue to sculpt a mesmerizing and colorful musical landscape.

Artists like BT have made the use of certain slowing down (or stutter edits) a staple of the Glitch genre. In fact many would call this type of effect BT's signature sound. In this series of tutorials we'll look at how to recreate this gradual slow-down stutter edit effect in Logic or any DAW of your choice.

This topic was suggested to me on the macProVideo.com Forums by Rob. He wanted to know how to create similar effects (focusing on style over sound). Take a listen to BT's track "All That Makes Us human". Around the 2:33 mark in the background is an example of the type of effect we're aiming for.

The trick here is to pick a sound with a short attack and release. A percussive sound like a snare, rim shot or hi-hat can often be perfect. There's plenty of sounds in Logic's EXS24 and loop browser that could be used. I've decided to use Sculpture's Xylophone preset and have shortened the attack and release and disabled the Delay parameter.

After recording a very short note on the Sculpture track, it's time to bounce the region to audio. Rendering the sound to audio makes it easier to cut up or resize the sound as we can see the waveform and make decisions accordingly. 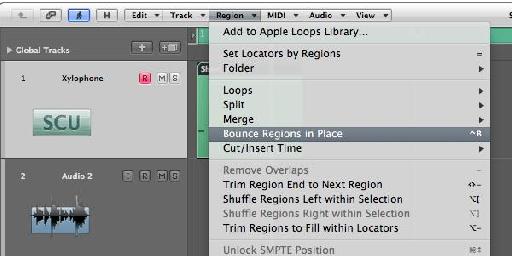 Let's resize the region to make the sound even shorter in duration. Preferably as short as possible while retaining enough of the sound itself... 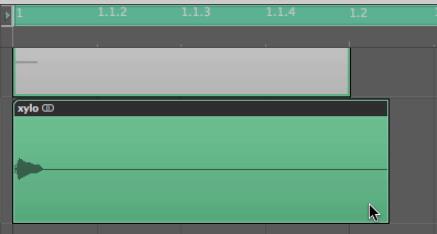 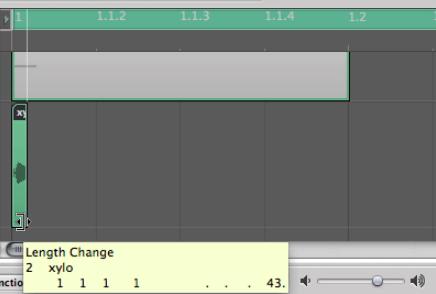 As you can see from the Bar Ruler in the images above, I've shortened the length of the region dramatically. You might prefer to perform these edits in the Sample Editor. Here's my example sound. Blink and you might miss it!

05 - Zoom right in and placing the hits

Zoom as close in to the Arrange area as you're comfortable with. In my case I can see the entire first bar. Now comes the time to experiment.

The idea is to create a slowing down effect (like a reversed bouncing ball), so we're going to copy these regions to create a pattern that doesn't directly fit into Logic's timing grid.

Option-drag the region to create a copy very close to the first region. Repeat the process and gradually space each region further apart. Here's what my Arrange area in Logic looks like:

Listen back to it and keep experimenting until you are happy with the spacing between each hit. You might want to experiment further and create a stutter edit which slows-down and then speeds-up gradually or more quickly. The only rule to obey is whatever fits best into your compositions and creates the desired effect.

I've added some Pan Automation by choosing View > Track Automation ("A"). Select Pan from the Automation Parameter Menu on the Track Header and click to create nodes and drag the automation lines as desired.

My final step here is to add reverb on the last hit to give it more impact. This would help make an interesting fill in a piece of music as well as add space and bring

I've added a Space Designer to the insert slot of the track and am using 0.7s Clear Vocals with the Reverb Output set to -35.0dB. From the Automation Parameter Menu on the Track Header I've chosen to automate the Reverb Output. I've drawn in two nodes before the last hit and increased the value to -22.0dB.

You may wish to experiment further by moving some of the hits to different tracks and process each track with it's own set of effects and add further automation to those tracks.

In Part 2 we'll look at how to create the stutter slow-down effect using Logic's plug-ins.