All Articles Synths & Sound Design
Creating Robotic, Machine-Like Sound Effects in Logic Pro
Mo Volans on Tue, October 18th 2 comments
Language
Sound design is one of the most fun pursuits on the planet. And with Logic Pro it's possible to create some truly unheard-of sound effects. Mo stretches, crushes, modulates, and filters his voice

I love a bit of sound design and you should too... Why? Because it's fun and you can end up creating something totally original and often unexpected. In this tutorial we'll take a look at a session where I took some raw audio and transformed it into robotic sound effects.

I am using Logic Pro 9 here but the techniques I'm describing are pretty generic in nature so you shouldn't have too much of an issue recreating a similar session in a different your DAW of choice.

When it comes to sound design you can literally use any sound source to create your final product. The beauty of working like this is that you have absolute freedom: any sound can be transformed into something completely new.

In order to prove this theory I'm going to use a simple recording of my voice to produce a Robotic effect. You can hear the recording below, in its raw untreated form. This was recorded using an AKG C4500B condenser microphone and has absolutely no processing applied. 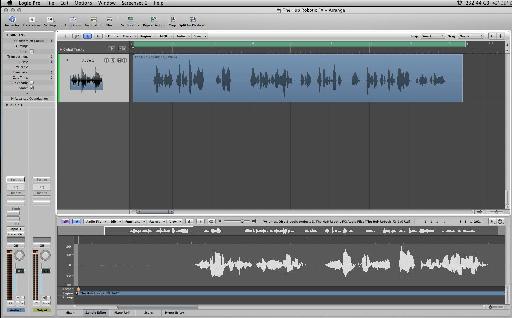 The recorded vocal ready to be edited and processed.

Next up I had to start selecting which parts of the audio were to be used as the separate elements of the effects patches. I decided I wanted to create some robotic (or at least machine-like) sweeps and washes.

For the sweeps I chose two of the most elongated parts of my vocal recording. The words I chose from the sentence were "word" and "and". These displayed the characteristics I needed to create a monophonic effect: they were monosyllabic and had a reasonable amount of sustain.

Some parts are selected and trimmed.

I also cut out the phrase 'Robotic sound effects' in case I needed any extra material. The parts selected were placed on a separate track and basic fades were introduced to get rid of any pops and clicks.

Some basic fades were used to clean up the selection.

The selected parts play back:

At this point I selected the piece of audio I wanted to work with first. I went with the word 'word' ! I felt it would work well for the robotic wash or drone I had in mind. Once selected I created an additional track to work off of.

The first thing I wanted to do here was make the vocal clip longer, much longer. To do this I had to use a heavy dose of time stretching. I used Logic's '˜In line' stretch mode that allows you to stretch audio directly from within the arrange window.

Simply grab the end of the audio region as if you were about to re-size it, hit Option and drag it out to the required length. The time stretching will then commence! Logic only likes to stretch the audio so far in one go, so in this case I did it twice. This double stretching also adds a certain grain to the sound, which I like.

The time stretching seemed to damage the audio image.

Once stretched there were some pops and clicks in the audio so I performed a few small trims and fades to the start and end. The stretched sample was now nice and clean with next to no unwanted anomalies. 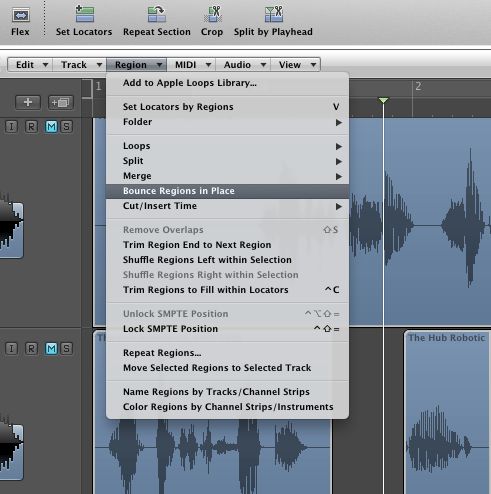 Bounce in place was used to make a fresh audio file.

One thing to notice was that Logic managed to screw up the overview of the audio file's waveform. To fix this I simply bounced the audio region '˜in place' and imported it into a new track. Sorted.

The new stretched file is in place.

The sound is already starting to sound pretty robotic and '˜sci-fi' but next up I wanted to add some processing that would tie the whole thing up. My aim here was to make the whole thing edgier, more robotic, and add some space.

With that in mind I added a Logic AutoFilter to remove some low end. I also added resonance and a touch of input distortion with this plug-in as well. I then moved on to a Bitcrusher to reduce the sample rate and bit depth and added further distortion. This was mixed at around 50%.

The next wave of processing included an enhancer to boost the high frequencies, a ring modulator to develop the robotic theme and finally some limiting to ensure that we had no overs and to boost the overall volume of the sample. 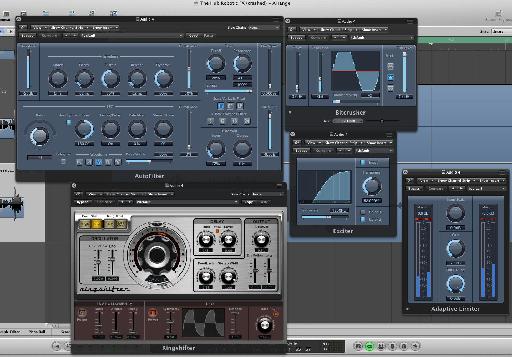 The entire group of effects that were used.

With these effects in place we were just about finished but I wanted to add a few extra touches to make the sound effect a little wider and more dynamic in nature.

My final aim was to add a varied auto panning effect. Now there is nothing wrong with auto panning plug-ins but I just prefer to program mine manually. It's not an extremely time-consuming task and gives you infinitely more control than using a plug-in.

I start by adding some slow alternate sweeps to the pan data and towards the end of the sample I increased the frequency. This makes the effect more intense as the sample progresses and adds a dynamic feel to the output.

The automation used to create the auto pan effect.

There you have it: in only a few moves I transformed one single word into a robotic, machine-like wash. This effect could be used in just about any style of music and would be especially at home in electronic tracks. Now record something and try your own!