All Articles Logic Pro
Deep Freeze in Logic: When to Freeze, When Not to Freeze
G.W. Childs IV on Mon, August 1st 0 comments
Language
There are a number of approaches to working with CPU-guzzling plugins in Logic Pro. In this quick tip article GW Childs IV runs through Logic's freeze function and when to use it and when not to.

It’s funny how the big, amazing, feature announcements from years ago can suddenly turn in to the hidden features no one knows, or talks about anymore today. It’s just so easy for features to get lost in the ever-changing GUI of brilliance that is Logic Pro.

When you’ve been building on a piece of software for as long as Logic has been around, you have to develop more buttons, sliders and contextual menus to hide more sets of buttons, etc. It just happens. But, certain buttons, I think, should be more readily available. Freeze, being one of them for sure!

What is Freeze and Why is it Valuable?

Freeze is a function that causes Logic Pro to quickly render to audio a single track, or multiple tracks, and then disable all plug-ins associated with the selected track(s).

This function is extremely valuable if you are someone who uses very CPU-hungry plug-ins that are taxing your processor so bad that you’re having dropouts, etc. Basically, if you’ve ever had your CPU meter (shown below) maxed to the point that Logic Pro started becoming unstable.

Who Would this be Valuable to?

If you’re someone that uses plug-ins like Vienna Symphony, EastWest sampler instruments, multiple instances of Superior Drummer, etc. Basically, all of the sampler-based instruments that store tons of samples in your system memory while you are using them.

Finally, if you’re someone running an older Mac with questionable stability, or performance!

Right-click on your track selection area of the arrangement window and check Freeze from the contextual drop-down menu. 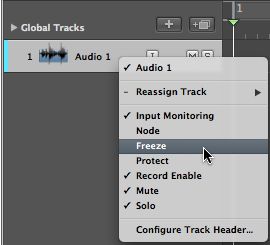 A little snowflake button will appear now next to your input button on all of your tracks within your project.

Now, when you get to the point where you are getting severe spikes on your CPU meter, meaning that the CPU Meter is in the red, simply press the Freeze button and Logic will immediately make this into audio, and disable your plug-ins the next time you play your project. If you decide you need to change something else later with the track, simply press the Freeze button on the appropriate track, and Logic will un-freeze the track. This will cause Logic to turn all plug-ins associated with this track back on. Neat, eh?

Some Things to know about Freeze

Once a track is frozen, there are only a few things left that you can do with it. You can:

And, that’s really about it. But, as I mentioned above, to un-freeze, simply press the Freeze button on the track again, and you can edit the instrument/effect parameters again.

But, with this in mind, this would not be the ideal configuration for collaboration with other partners that don’t have certain plug-ins that you don’t have, etc. The only exception would be someone doing a mixdown for you, and this would still be very limiting.

In such cases where there will be collaboration, I would recommend bouncing the track to an audio file manually, once you’ve done all of your edits, and the basic arrangement of this track is in place.

In short, Freeze is a quick and easy function for a very specific type of audio person. It’s definitely not for all. But, if you fall in to the category of the hungry, hungry plug-in farmer, you’ll definitely enjoy it!

For more tips, tricks and tutorials on how to work more efficiently in Logic watch these Logic Pro Tutorial-Videos!