All Articles Logic Pro
Demystifying Logic Pro X's Plug-In Settings, Channel Strip Settings & Patches
Joe Albano on Tue, October 29th 1 comments
You can save lots of time in Logic by making efficient use of its powerful system of patches and settings, recalling whole setups in an instant. Joe Albano shows you how it's done.

Logic provides a number of ways to recall and save factory and user settings for both individual plug-ins (effects and instruments) and entire channel strips. There are three levels of preset organization, and primarily using the top-level approach—as Apple intends—is fairly straightforward, but people will need to be familiar with all of the different options, for anything beyond the most basic use. This article will cover the ABCs of those three preset types.

The three levels of organization for plug-in and channel strip settings in Logic are Plug-In Settings, Channel Strip Settings and Patches. I’ll start with a brief overview, and then get into a little more detail.

Each of these are stored in their own folders on the hard disk, in two places. Factory Plug-In Settings and Channel Strip Settings are found in the root-level Library > Application Support > Logic folder. 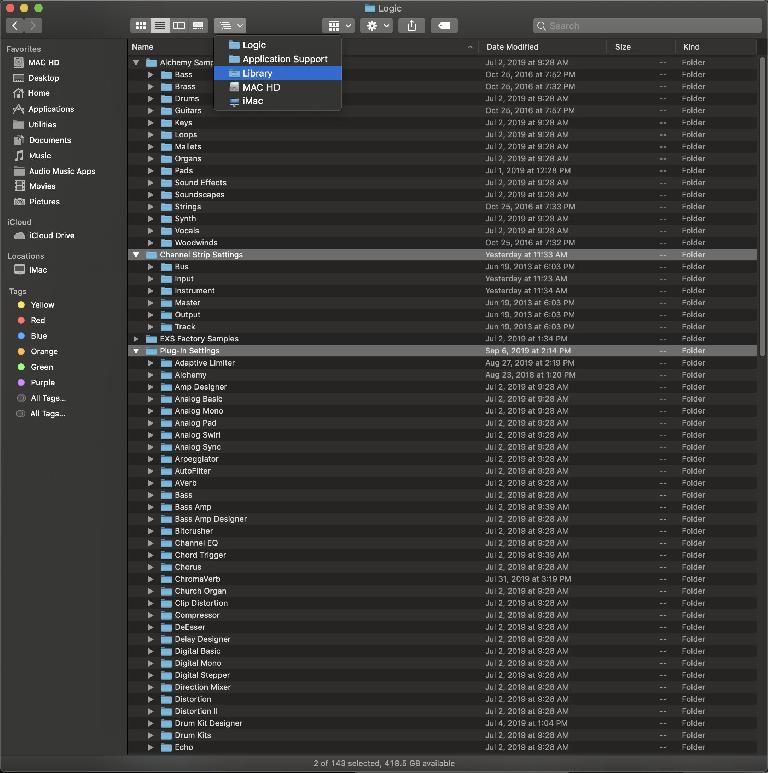 Factory Patches, on the other hand, are located within the Logic application itself. (If you’re curious, you could right-click on the Logic app and Show Package Contents, and you’ll find them in Contents > Resources > Patches, but of course you shouldn’t mess around in there.)

User-created settings are found in your home folder, in Music > Audio Music Apps, in three separate folders. When you create and save your own settings in any of the three formats, they’ll be stored in the appropriate folder in this location. 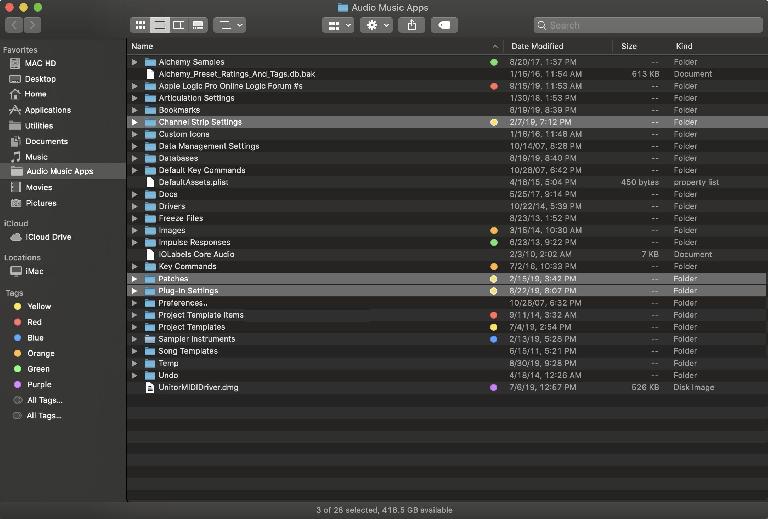 Plug-In Settings (.pst) include all the front-panel settings, and are loaded or saved via a pop-up menu at the upper left of the plug-in window header. Alternatively, you can select them via the Library Pane (shortcut “Y”), if you click to the left of a particular plug-in in the Inspector. 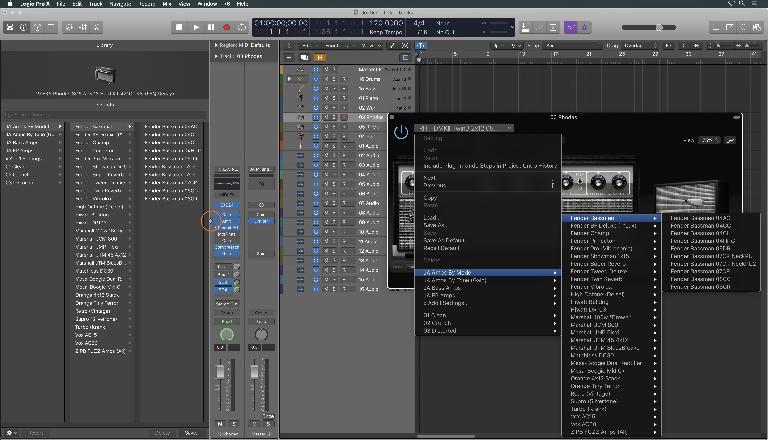 Again, Plug-In Settings include all front-panel setting in the plug-in window, for both Logic’s own plug-ins and third-party plugins. A note on that—most third-party plug-ins usually also include their own preset functionality, which is independent from  Logic’s Plug-In Settings. Third-party presets are stored elsewhere on the hard disk, depending on the plug-in, and should be available in any DAW that supports that plug-in, while Logic’s Plug-In settings are of course only available when the plug-in is used within Logic.

When you save a Project, the settings for all currently-used plug-ins are also saved within the Project itself. So if you move the Project to another studio it’ll include all the correct Settings for active plug-ins, but unless you bring the various user Settings folders with you you won’t be able to load any other user Settings stored there (this applies to the other preset types as well).

Note—Logic’s built-in EXS sampler actually consists of two windows—the main front-panel and a secondary EXS Instrument Editor window, with additional settings including the sample keymap(s). These necessary Editor window settings are not stored in Plug-In Settings—EXS saves them in separate files, as Sampler Instruments (.exs). I don’t have room to get into the details here, but the EXS architecture is covered in detail in this article: https://www.macprovideo.com/article/logic-pro/solve-the-case-of-the-missing-exs-instrument-samples-in-logic-pro. Anyone who creates their own EXS sounds will need to have a handle on this additional preset format.

In retrospect, this option might have better been called something like “Multi-PlugIn Settings”. A Channel Strip Setting (.cst) includes all the front-panel settings from all plugins—both Instruments and effects—in a particular Channel Strip. For Instrument channel strips it also includes any MIDI plug-in settings. However, it does not include the settings of the controls on the surface of the channel strip itself—Pan, Channel Fader, and Sends. This allows different instruments and multi-effect presets to be loaded in a channel without changing those mix-related settings. 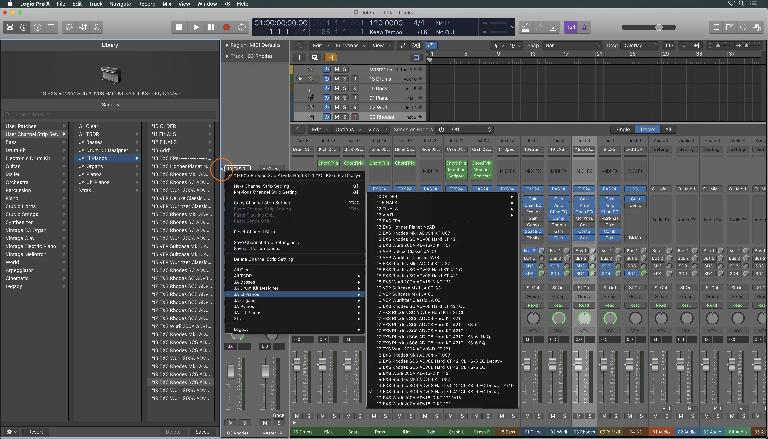 Channel Strip Settings are a great way to create, save, and re-use presets that are made up of multiple effects, or instrument presets that include effects that are not built-in to the instrument itself, greatly extending the utility of basic instruments like EXS. And the ability to save and load MIDI plug-ins is also convenient, especially for Instrument channels—I often include a MIDI plug-in that re-maps drums, making it easy to swap out different drum sounds from different sources that may not share the standard GM drum map. 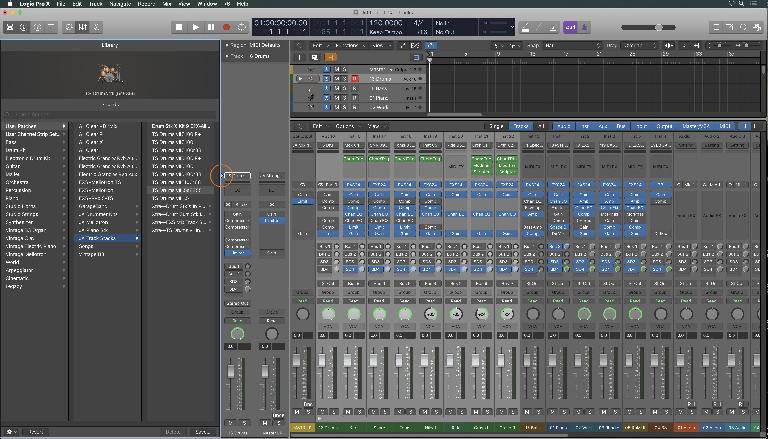 A Patch is a more complete version of a Channel Strip Setting, for when you do want to save the mix controls’ settings as part of the Patch; but it goes much further than that. A Patch can also include multiple channel strips as part of a (summing) Track Stack. So you could use the Patch format to save what would be Logic’s equivalent of a multi-timbral preset, with several instruments layered or mapped out in zones. This is perfect for creating custom drum kits, like a kit that’s made up of multiple EXS instances (to allow for, say, independent per-drum envelope and filter settings); and if you’ve made up a custom kit that’s comprised of different drum plug-ins for the different drumkit components, the entire kit can be saved as a Summing Stack, and conveniently loaded and re-used in any other Logic Projects.

A Patch also serves the Send settings in the channel strip, and this is where it can get a bit complicated. If you save a Patch with a couple of, say, reverb sends that feed reverb plug-ins in a couple of Auxes, the Patch will include and load those settings, but not the associated Auxes. If you work with a Template that already has the reverbs in Auxes with those buses as inputs, the newly-loaded Patch will utilize those existing Auxes, and you’ll hear the reverb. But if the Project you load that Patch into doesn’t already include those reverbs/Auxes, the Sends will still be there in the loaded Patch, but they won’t feed anything—the associated Auxes won’t have been saved or loaded—and so you won’t hear any reverb. This is made more confusing because if you load a Factory Patch with Sends, it will load the associated (destination) Aux(es)—apparently the limitation is in the Save stage, and this inconsistency has apparently persisted for many years.

However, it is possible to save the associated Auxes for any Sends included in the Patch, but you have to pack them into a (summing) Track Stack to do so. This is easy enough to do as long as you understand the quirks, though the manual does not really address the specifics of this behavior. 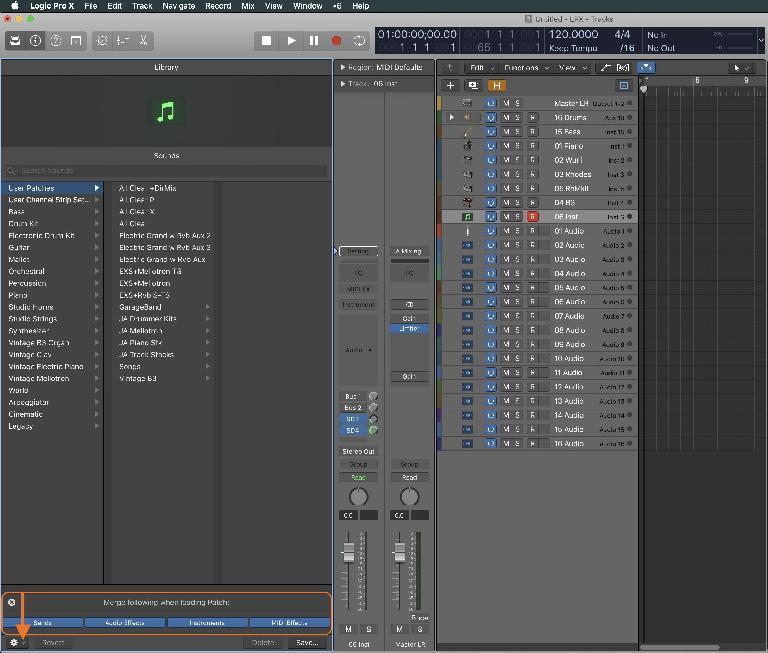 With all categories enabled, the Patch will load everything saved in it, as above. But if you disable one or more of those data types, the Patch will not load those settings—instead it will retain the settings in the current channel strip, in effect letting you merge the desired Patch settings with some of the current channel settings. So, for example, you could load/audition different Instrument sounds while retaining the full chain of effects in the existing channel; or you could load a different effects chain—from a different Patch—without changing the current Instrument. You could also load just the instrument/plug-in and Volume/Pan settings without the Send settings, if you choose to manage sends and auxes manually in the current Project.

So while Patches may have a little more of a learning curve, they provide the most flexible and powerful options for preset management in Logic. But Plug-In Settings are still the way to manage individual plug-in tweaks, and Channel Strip Settings may be the most straightforward way to load instruments and effects without potentially affecting other mix settings. Though Apple seems to push users toward the Patch format and Library panel, all the preset types—and the different ways to access them—have their uses, and can help Logic users maintain the most efficient workflow.