All Articles Logic Pro
Drum Replacement in Logic 9
Rounik Sethi on Sat, November 13th 2 comments
Language
You've recorded a great multi-track drum take. The performance was perfect, but let's say the kick drum sound leaves a lot to be desired... What do you do? In previous versions of Logic you had a coup

You've recorded a great multi-track drum take. The performance was perfect, but let's say the kick drum sound leaves a lot to be desired... What do you do? In previous versions of Logic you had a couple of options: 1) Re-record the performance (or just the kick) using a different drum kit, mic setup, room, etc. 2) You could go through the kick track and use Audio to Score to replace each kick with an EXS24 kick sample, or 3) Use software out there, like Drumagog, that can make the process less painful.

Logic 9 includes Drum Replacement / Doubling built in. It analyzes the audio track and offers options to substitute the original sound with a sampled sound. Not only does it work very well, but it is a real time-saver. It automates a lot of the Audio to Score features. So, how do you use Logic 9 to replace or double drum sounds in your project? Read on to find out more...

I'm all set up to begin drum replacement. I've got three audio tracks for this example. One Kick, one snare and one hi hats.

We're going to focus on the replacing kick in this tutorial, but you can apply the techniques to any element of a drum kit. Here's what the three tracks sound like when played back together in Logic:

Here is the original kick drum track soloed. You can hear the bleed from the snare microphone in the background when it was recorded. You might think at this stage that it's best to remove those snare hits using the Scissor tool or Strip Silence. But, there's no need as we can tell Logic to ignore those hits later in the process.

Select the track you wish to use, as I mentioned above, I'm going to initially replace the kick drum sound, then choose: Track > Drum Replacement/Doubling (from the Arrange local menu)

Logic carries out a number of functions at once. Here's what's happened... Logic has analysed the audio regions on the track and placed transient markers at the beginning of each transient detected. Next, a new Software Instrument was created with an EXS24 as the instrument. A new MIDI region is placed on this track with note events that correspond to the transients from the original audio region. Finally, the Library tab is opened and by default an Acoustic Kick sound has been chosen.

Next, you can choose whether you'd like to replace or to double your drum sound. In this case, I'm choosing Replace. 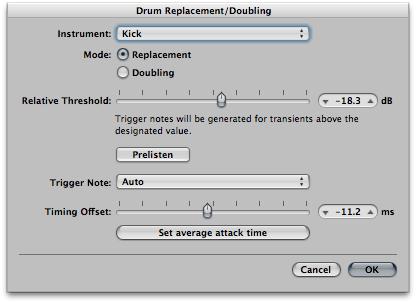 The Relative Threshold slider determines which transients will be replaced/doubled depending on their volume level. Drag the slider all the way to the left. You'll notice that the yellow transient markers increase to include every transient over the -40dB level. That's not great in my case as this means the kick and the snare hits will be replaced with a kick drum sound.

Use your eyes and ears (with the Prelisten button) to include only the transients/hits you wish to be included in the process. In my example below, I've set the threshold to -10.4dB which includes all the original kick only. 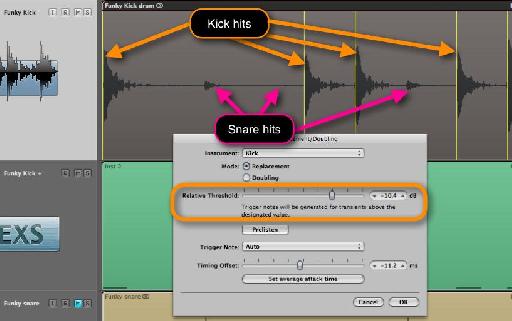 In the Library area, you can choose different individual drum sounds. In fact, you are not limited to using these Single hit EXS24 Sampler Instruments, you can choose any EXS24 instrument (including your own sampler instruments). 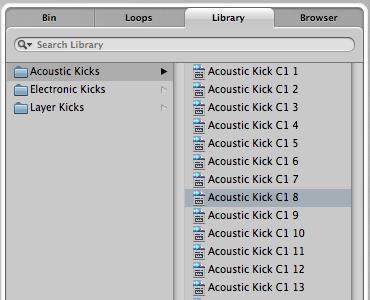 One thing to bear in mind is the Trigger Note. Let's say, you want to replace the Kick audio track with a specific sound from another sampler instrument. By default, the General MIDI spec for a Kick is on C1. The Trigger Note is set, by default, to "Auto". However, you can choose a different pitch that will be triggered for all the transients if you wish... and carry that settings to affect any sampler instrument you may select.

This can make the Drum Replacement in to a very interesting sound design tool. In fact, it's another great way to completely change the acoustic nature of a recorded drum kit into an electro-kit for example.

Once you've selected a sound you like make sure to use the Prelisten function (which plays back the original and MIDI region only). Now, you're almost done.

One last area to cover is the Timing Offset. Often the transient of a sample in an EXS Instrument may not be right at the beginning of the sample's audio file. You can adjust then the delay (negative - left, and positive - right) by which the trigger notes will be shifted to compensate for this. Set the value to 0.0 for the notes to be triggered exactly where the Transient marker is.

NOTE: You can also, click on the Set average attack time button to calculate an average across multiple regions placed on the original audio track.

It's important to play around with this to get a feel for what sounds right for your drum part in question. If you make changes to the Timing Offset during playback, click Prelisten twice to stop and then restart playback again. This will allow Logic's Audio Engine to reflect any offset changes when Logic's Transport is running.

Click OK when you're done. Logic will mute the regions on the source audio track. However, I've run across an annoying, but harmless, bug that you might also experience. Although the original audio region is muted, you may still hear it when playing back in Logic. If this happens simply select the audio region and press "M" twice (to unmute and then re-mute the region again). It should behave as expected again. 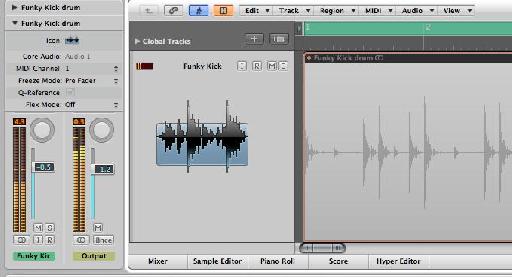 Interestingly, because the MIDI region is sitting on a Software Instrument track, you can choose any sound, instrument or EXS24 Sampler Instrument as the source sound anytime after exiting the Drum Replacement window.

Opening the MIDI region in the Piano Roll also reveals that the velocity information of the original audio waveform has been read and preserved by Logic! You now have the flexibility that MIDI editing affords to edit the velocity, length, quantization values, and more of each MIDI note event! Often, when you're using the Drum Replacement feature, you'll want to replace like with like. I've decided to repeat steps 02-08 above for all three tracks (kick, snare and hi hats) and for fun, to transform my acoustic drum performance into an Electronica drum machine, using only the built-in Drum Replacement features... and here are the results:

Of course, my results in this tutorial have no bearing on what your music will sound like, so play around and double-up or replace your recorded drum sounds!

Check out Steve H's Logic 201 tutorial to learn all about Beat Mapping, Drum Replacement and much, much more!