The new Logic Pro 10.4 update has a new effect category called “Multi FX” and two new effects “Phat” and “Step” to go along with it. These multi-FX are made up of different effect modules combined into a single interface. The Phat FX effect is great for adding subtle analog warmth and tube type effects to your kicks and basses, but is equally capable of highly driven sounds and for increasing presence on synths. Step FX allows you to use up to three step sequencers to easily create rhythmic gates, animated filters, reverbs that stop/start instantly, and even the wet/dry mix of the entire plugin itself.

You might find these a bit familiar if you’ve used effects made by the Apple-acquired company “Camel Audio.” The now discontinued effects Camel Phat and Camel Space are what Phat and Step seem to be based on, but done Apple style.

The first thing to remember is that all the processors/modules contained within either of these new effects can be powered on/off with their own independent power switch. The small power buttons in the left corner of each module are lit up orange when on, and grey when off. At the bottom of Phat/Step, you can easily see the modules that are enabled (not greyed out), and can put them in any sequential order by simply dragging them left or right. The order can make a big difference (as it does on a standard Logic channel strip). On a Logic strip, sound travels from the top down, in Step or Phat, your track’s signal travels through the enabled processors from left to right. In Step for example, if the reverb is before the gate, the reverb sound will abruptly stop as the gate opens and closes, but if it’s placed after the gate, it will play out as normal. 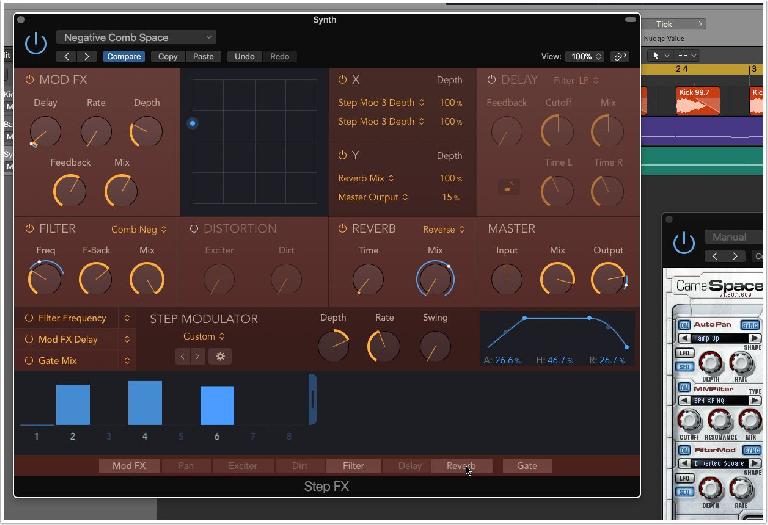 Each of the the effects have different “processors” and “modulators” which are described in each individual effect below. Processors like filters, distortions, and reverbs are in the lighter colored areas, and “modulators” like LFOs, envelopes, and step sequencers are darker colored. You can easily “target” a processor in the various modulators with the aptly named target menus. You can tell when the target is being controlled with a blue semi-circle line that visually represents the range being controlled. Both Phat and Step have an “X/Y” square for assigning various parameters to be controlled simultaneously (by moving the dot in the square). Now let’s take a look at the individual processors/modulators contained in each effect.

First the processor modules. At top left, you’ll find the bandpass filter with a great “reject mix” knob that allows you to mix in the unprocessed signal. At top right is a fantastic sounding multi-mode filter with standards like lowpass, bandpass and highpass, but also uncommon options like tube, and “mech.” Most of the lowpass options have an amazing sounding drive knob for added analog vibe. The middle row consists of a multi-mode distortion unit with up to three simultaneous effects like tube, saturation, and bit crushing, Mod FX for phasing/doubling effects, also the extremely useful bass enhancer (described below), and a compressor module with the same circuit type settings as the standard Logic single compressor effect. 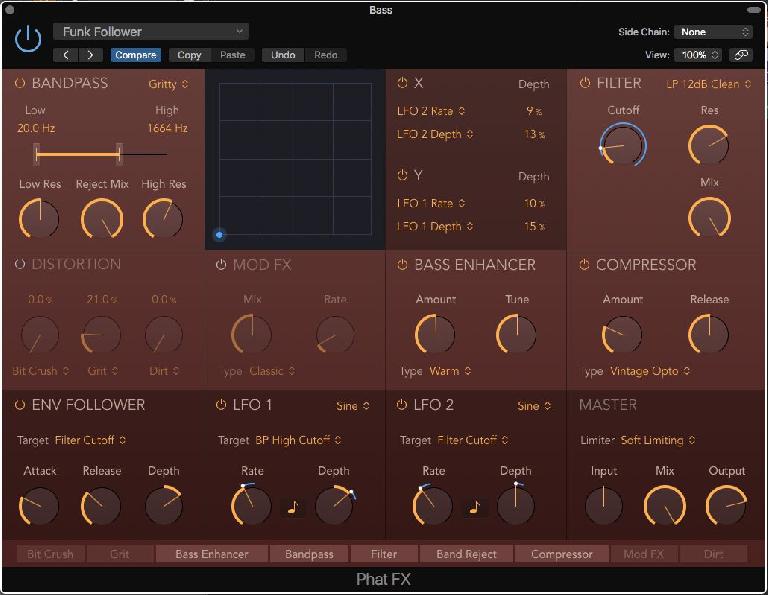 The modulators in Phat include an envelope follower that uses the signal itself to take shape over a target like filter cutoff and distortion amount. There’s also two tempo synchronized LFO’s for assigning to things like bass enhancer amount or filter cutoff drive. Here you’ll also find the master area with a limiter for keeping things well under control, and a useful mix knob for blending in the unprocessed original signal.

The top left processor is a phaser/flanger type effect called Mod FX, and at the top right there’s a delay effect with feedback control, synchronized delay times per left/right channels and a delay filter. At middle center you’ll find a multi-mode filter same as on the Phat but without the drive control, a simple distortion, and a reverb with a cool sounding “reverse” setting. 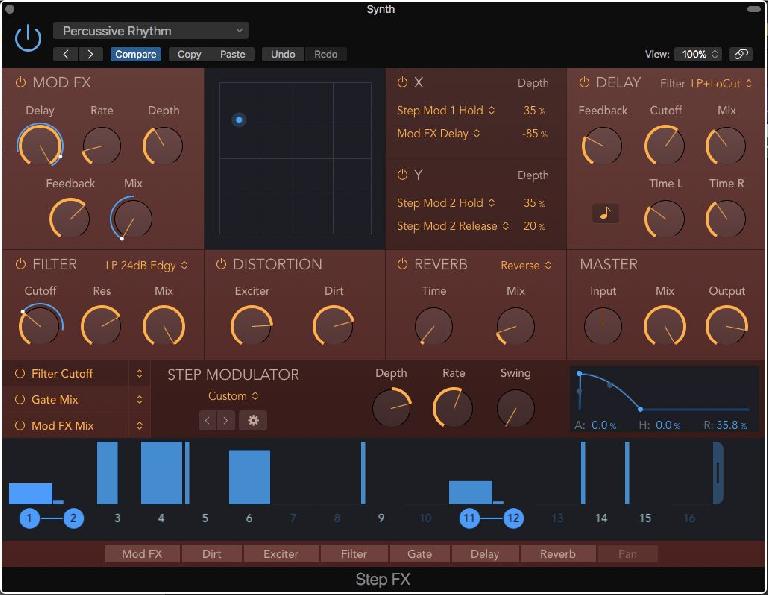 In Step FX you won’t find envelopes and LFOs like in Phat, you’ll find 3 assignable “Step Modulators.” These step sequencers can be assigned to nearly 20 different parameters within Step FX like gate, filter cutoff, reverb wet/dry mix, delay feedback and more. Each of the up to 128 steps can play back at selected rates like 1/16, 1/8, 1/4 and so on. The value of each step is visually displayed. Height represents the value number and width represents the length of the value up to the chosen rate value. There’s also a basic envelope for shaping the output, and depth and swing knobs. You can even save your own collection of step modulator patterns, or use a small library of preset settings.

I started with a basic kick sound with no additional processing to see how Phat could enhance it. I’m not one for a distorted kick sound, so I’m really looking for a more subtle effect. With the default patch, I’ll first disable the bandpass and distortion processors. The bass enhancer module is fantastic on kick sounds. I set the amount to 40% and swung the tune knob down toward the kick frequency around 50 Hz. This puts a very warm and thickened vibe on my kick. I also used the filter processor to add warmth and to tame the kick’s click a bit. I chose one of the lowpass options from the filter type menu, but there are over 30 options here. I nudged up the filter drive a bit for even more chunkiness, and pulled back on the cutoff somewhat.

Tip: If you find yourself using only one or two of the modules regularly, you might want to “save as default” -from the patch menu at the top- with only the desired modules enabled. Here’s an audio example of the kick before then after:

Using a simple bass sound made in ES2, I enabled the Bandpass filter that immediately adds a nice touch to the sound. I adjusted the “Low Res” (Low Resonance) setting which puts resonance around the low frequency slider's position. I also enabled the bass enhancer with a setting similar to the kick I processed above, except I dialed in the tune knob in the range of the bass sound. The compressor here in Phat FX seems to be the same standard Logic compressor but with two extra circuits called “classic” and “clip.” 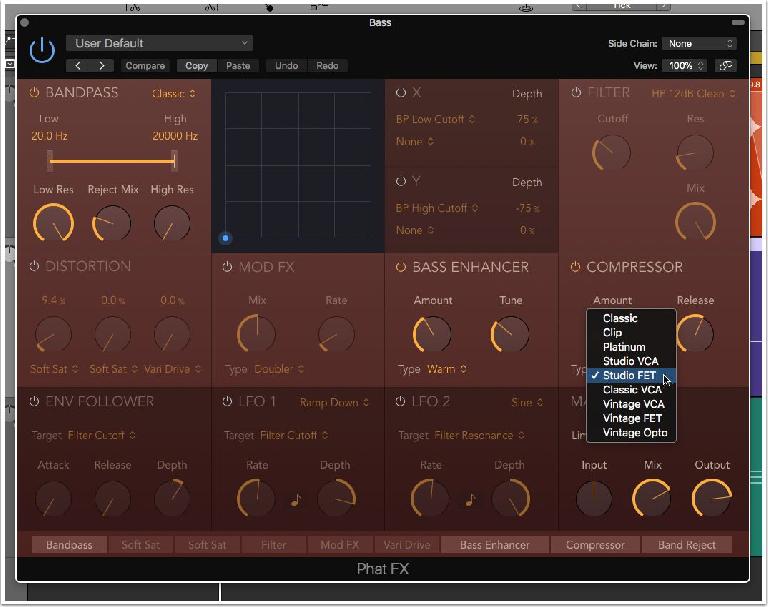 Bass example before then after:

Starting with the default preset, I disabled all the processors other than the filter and the reverb, and then clicked to select the top step modulator already assigned to the filter cutoff. I lowered the rate to 1/8 and adjusted the step modulator depth to taste too. I enabled the second modulator already assigned to gate mix and switched it to master mix instead so I could use the step sequencer to control the wet/dry mix of the effect itself. The bottom step modulator I reassigned to the Reverb mix so I could sequence the reverb mix from totally dry to totally wet instantly. 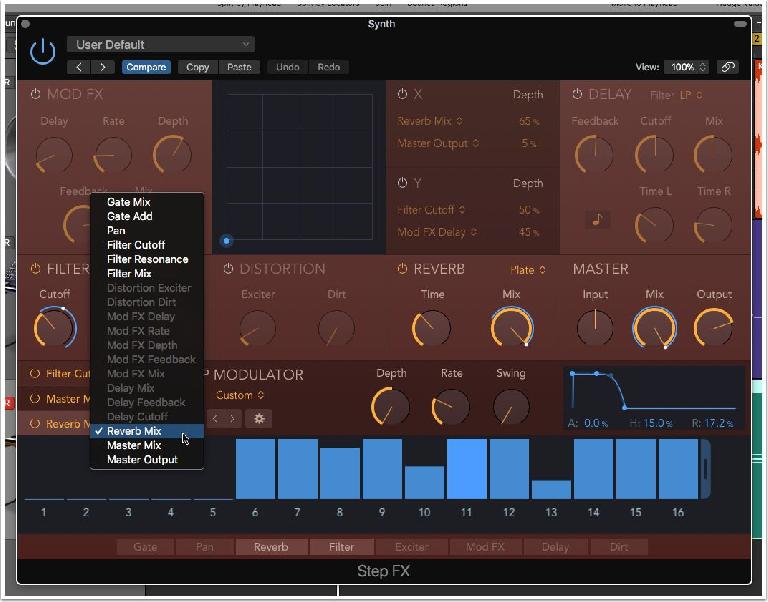 Synth example before then after:

Here’s all three sounds together, before then after