Not enough bottom end in your mix? Kick drum a bit weedy, thin or disappointingly lightweight? Using Logic Pro's SubBass plug-in is a well documented method for synthesising very low frequencies where none previously exist, but its use is fraught with the danger of creating multiple clashing frequencies which can cause havoc and potentially wreck a mix with a mess of low end, some of which can't even be heard, unless you have monitors the size of a house. This article shows you how to double the kick drum with a pure sine tone (no harmonics to complicate matters) whose frequency you can control, in both Logic Pro and Pro Tools.

There are two easy ways to access a pure sine tone in Logic Pro. The first is to use the EXS24 sampler with no sampler instrument loaded, but this requires MIDI note information to play. The second is the Test Oscillator, a handy gadget designed to test the response of your monitoring system and the acoustic properties of your listening space. When you load an instance into the input slot of a Software Instrument Channel's I/O (Utility > Test Oscillator) be prepared to reach for the volume control as, unlike a regular instrument, it just plays without being asked to, and in this case that is why it is so useful. 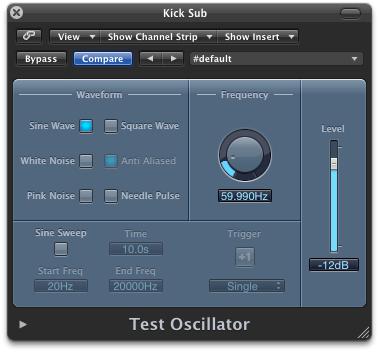 Insert a Noise Gate plug-in on the same channel as the Test Oscillator, then connect its side chain input to the audio track whose kick drum track you want to double. Adjust the threshold of the Noise Gate so that it only opens when the kick drum plays. 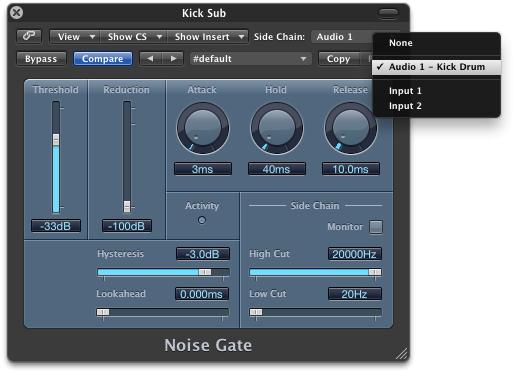 Check the Test Oscillator is playing a sine wave, then lower its frequency to something suitably 'subby' for your mix (around 50 to 60 Hz perhaps) - but make sure you can really hear what it is doing, as you don't want to release a mix that will destroy expensive speaker systems!

For more accurate control, you can slow down the movement of controls like the Frequency dial by holding the Shift key. Alternatively you can manually enter a value by double-clicking the Frequency field, typing a number and pressing Return. The 'envelope' of the sub tone can be shaped using the Attack and Release controls on the Noise Gate but, beware, very low values are likely to cause clicking.

The approach in Pro Tools is very similar, with one or two minor differences. Sine waves are generated by the Signal Generator plug-in - click on the first Insert slot on an Auxiliary Input track and go to plug-in > Other. Then in the second Insert slot load a Noise Gate (plug-in > Dynamics > Expander/Gate Dyn 3).

Then connect an unused bus to the Key Input. You can then send to this bus from a Send slot on the kick drum's audio track. Finally turn on the side chain by clicking the small key icon to the right of the words 'Side-Chain' on the right-hand side of the plug-in interface. Adjust the parameters of the noise gate to taste, as well as the frequency of the Signal Generator. 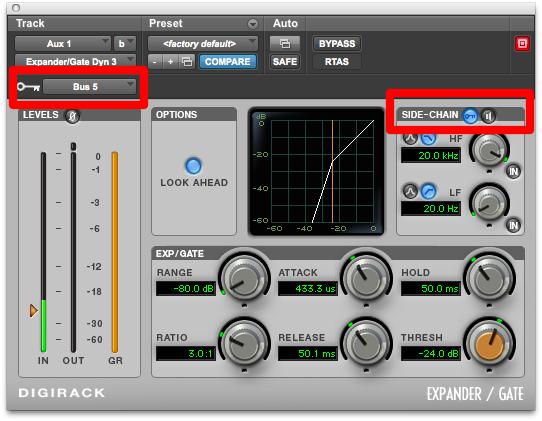 And that's all there is to it!

Interested in learning more about Pro Tools and Logic?

Mike Watkinson
Mike has been obsessed with music software since he first saw Fairlight's Page-R, and has tracked its development through his work as a performer, composer and producer. As a writer he has contributed articles to Sound On Sound since 1999, and currently writes their Apple Notes column. As well as being a certified Logic Pro and Pro Tools trainer he is also an Apple Distinguished Educator.
Related Videos
Comments (9)