Logic still has some advanced hidden tools up its sleeve. Of course you can resize, cut, paste, copy sections of a region using the Marquee tool, etc. But one little known feature in Logic is the ability to slip edit the audio inside a region. If you're familiar with video editing and are aware of Final Cut's editing capabilities, then you'll know what I mean. For anyone who isn't coming to this from a video background I'll explain. Slip editing maintains the duration (or length) of your region but edits the start and end points of the audio within the region.

So, to demonstrate why this would be useful: take a 4 bar apple loop or audio file and drag it into the Arrange area. resize the end of the region to make it one bar long. The original audio file is still 4 bars long, but the region is only showing you 1 bar's worth of the file. Good. If, however, you want the region to display (and play) the end of the audio file and not the beginning, you could drag the region out to be 4 bars long again, then resize from the left edge to create a one bar region and move the region back to it's original position. Not very convenient if you want to quickly audition the audio from the middle of the file as a one bar region...

This is where slip editing comes into play: Using Logic's (mainly hidden) slip capabilities you can slip (or move) the audio within the region, without affecting the region's length or moving it in the Arrange area.

There are two methods to slip edit in Logic. This first method will work from versions 7 to 9 and perhaps earlier though I don't have the opportunity to test this anymore.

Select the region in the Arrange area and choose Region > Lock SMPTE position
Notice that a padlock icon appears in the top left of the region. SMPTE locked regions will be fixed to their current position in Logic's Timeline. They will not move even if you change the tempo of the project. (Remember you can unlock SMPTE position after you've performed the slip edit if needed.) 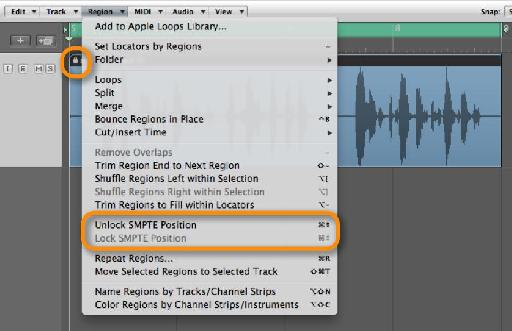 Now, I chose to lock the region's SMPTE position because this next step does not work for me on my system using Logic 9.1.1. It may, however, work fine for you. So you may choose to skip step 1 above and instead use the following lock position command. (You can use both commands if you wish).

Double-click on the region to open it in the Sample Editor.
Now make sure that Edit > Lock Arrange position when moving anchor is enabled/ticked. 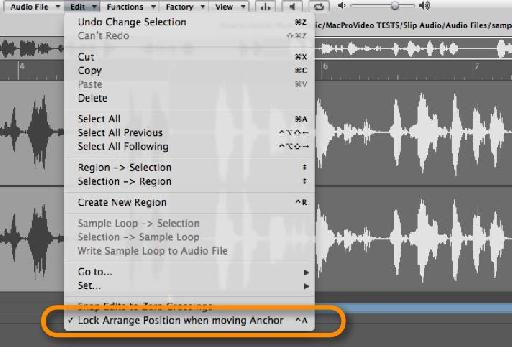 Extra Tip: In Logic, audio regions are aligned to their grid position by an Anchor point. When you move an audio region in the Arrange area you'll notice the vertical white lines at the beginning of the region help you align the position of the region. These white lines are not tied to the region's start point, but to the anchor point. If you move the anchor point for a region in the Sampler Editor then you'll notice that those white 'align' lines will move respectively.

Every editor in Logic has it's own tool set. You'll find a handy (sic) tool is the ... er.. Hand tool in the Sample Editor. I have mine selected as my Command-Click tool. To use it I will hold down the Command key and drag the selection area to create a new range. 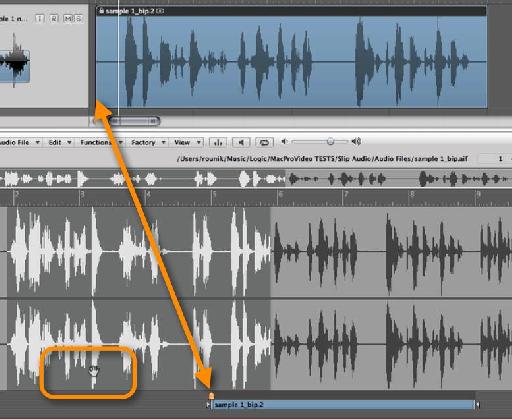 Notice that the region start and anchor point still display the contents of the audio region in the Arrange area.

To update the region from our selection in the Sample Editor choose:
Edit > Selection to Region
(you can set this up as a key command in Logic Pro > Preferences > Key Commands) 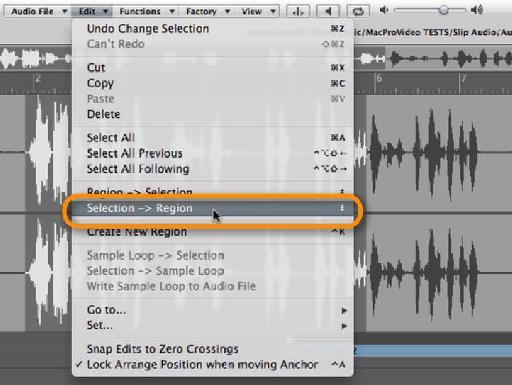 Notice that the audio has been "slipped" in the Arrange area's region. (See image below)
Note: Remember to UnLock SMPTE position for the region if you need to. 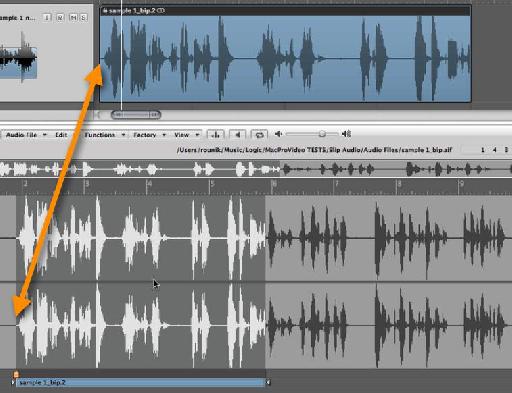 This method is very useful as most Logic users are often familiar with the Sample Editor. By assigning some of the menu commands to easy to remember key commands you can perform slip edits very quickly. However, there is an easier and more direct way to slip edit in Logic. The following method may or may not work in versions up to 7.

Step 1 - Open the Window NOT the Bin

Select the region in the Arrange area and choose Window > Audio Bin
(You can't do this in the Audio Bin Tab as it doesn't display the waveforms of audio regions.) 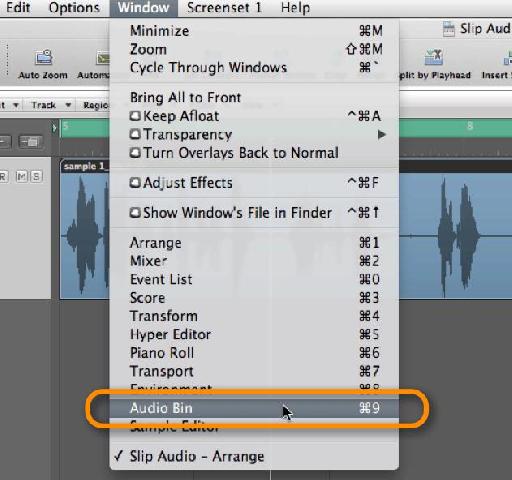 Zoom in to the Audio Bin window so you can easily see the waveforms. Position the mouse pointer in the bottom half of the region in the Audio Bin Window. The pointer turns into a double headed arrow... essentially the Slip Tool! Notice the position of the waveform in the pic below before we begin to slip edit. 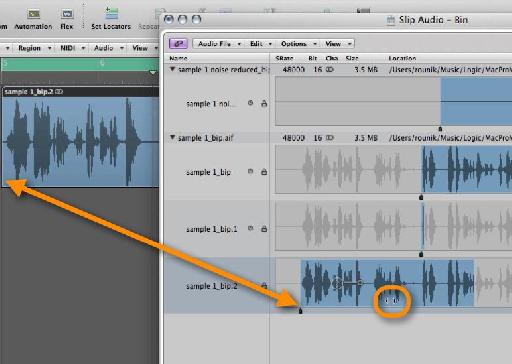 Drag the region selection in the Audio Bin Window along the horizontal axis to slip the audio. The audio region in the Arrange area updates immediately. See the screenshot below: 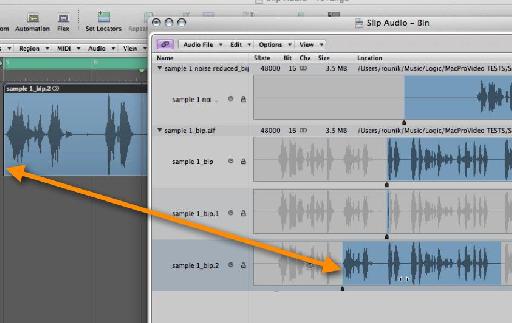 And that's all there is to it. Method B is certainly much easier to execute that Method A, but techniques like Method A can be very valuable ways to learn about some of those less-visited commands and menus in Logic's Sample Editor!

Check out these Logic Pro & Express Tutorials to learn more!