All Articles Logic Pro
Is It Time To Step Up From GarageBand To Logic Pro?
Hollin Jones on Sun, December 17th 0 comments
Moving from Apple's free GarageBand to Logic Pro involves learning new tools, tricks and techniques. This video with Booker Edwards explains what you need to know.

GarageBand is a great app for the Mac and shares some of its DNA with Logic Pro, but Logic is a much more professional tool. At some point, it's likely that you will want to move from the free software up to Logic and when you do, a helping hand will definitely be useful. That's where Booker Edwards comes in!

In this video from the course GarageBand 202: GarageBand To Logic Pro, he discusses the challenges that are involved in moving from the smaller app to the larger one but also the benefits you will get from the far more powerful tools available in Logic. Although they may look superficially similar, Logic has a far greater depth of functionality and in this course, you'll learn how to step up and take your productions to the next level!

Preinstalled on every Mac, GarageBand is one of the most popular music creation apps in the world. Maybe you’ve been using it for a while now, and you’re starting to run up against its limitations. Or you may be wondering if jumping over to its bigger brother, Logic Pro, would be worth the price of admission. Or maybe you just switched over to Logic, but you find the learning curving a bit too steep. No matter where you're coming from, this course by Logic Certified Trainer Booker Edwards, is here to show you what benefits you get by upgrading to Logic, and how you can make a smooth transition from the entry-level GarageBand to the pro-level Logic Pro!

Booker starts the course by explaining how to easily import your GarageBand projects into Logic Pro, and how Logic’s interface is both different and similar to GarageBand’s. Next, he dives into the powerful pro features Logic has to offer. He explores the advantages you get from using Logic’s synths and effects, the flexible ways you can edit your drum performances, the fully-featured mixer, MIDI FX, and more.

You also discover how Logic’s Flexible Time and Pitch gives you the ability to quantize and repitch your audio in ways impossible in GarageBand, and how much editing power you get with Logic’s arsenal of flexible tools. You even learn how to use Logic’s advanced Automation features, and how Logic gives you everything you need to create a professional mix.

As a bonus, the course closes by switching everything in reverse gear by explaining how to take a Logic Pro project back to GarageBand for iOS, and why you would want to do such a thing. So watch this course by Certified Logic Pro trainer, Booker Edwards, and learn how to make a smooth transition out of the garage into the pro universe of Logic! 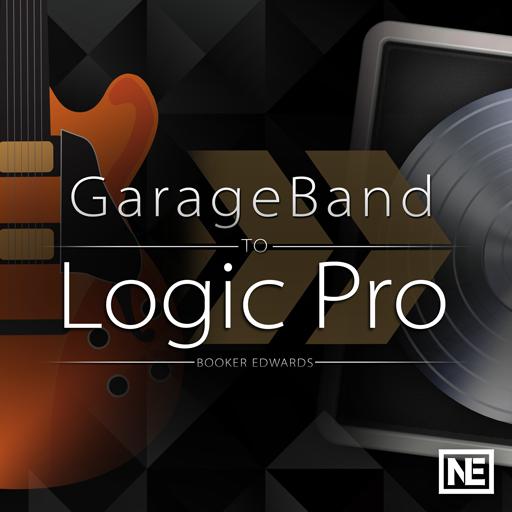 Dream It. Do It.
Do you want to learn GarageBand to Logic Pro?
Yes, I want to learn!
No Thanks, I just want to read the article.
Feedback
How are we doing?
We'd love your thoughts, feedback and questions regarding our new site. All feedback is appreciated!
We do not respond to this form! If you need support, please visit our support page.
Thank you for your input!
Your message has been successfully sent
Course Advisor
Don't Know Where To Start?
Ask A Course Advisor