All Articles Logic Pro
Logic and Omnisphere: Create Your Own FX In Space Designer
Toby Pitman on Tue, May 31st 23 comments
Language
Space Designer is a powerful tool. Not only can it be used to load Impulse Responses for realistic reverbs but it can also load any .aif or .wav that can be convolved (merged) with any source you feed

Logic's Space Designer is a powerful tool. Not only can it be used to load Impulse Responses for realistic reverbs but it can also load any .aif or .wav that can be convolved (merged) with any source you feed into it to make all sorts of new and exciting sounds and FX.

I'm going to show you just one quick example of what you do with with this.

I'm going to modulate the Amp, Filter and Res with some of the supplied Rhythmic envelope presets to create an FX loop. I advise you experiment and see what you get. 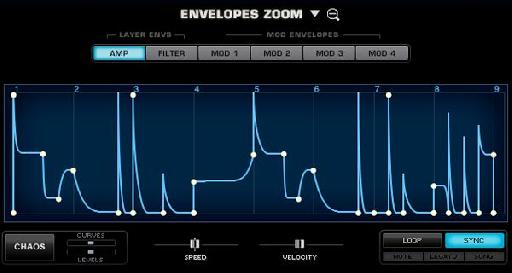 Step 2 - Set Up Something To Effect

I've made a 4 Bar drum sequence using the Default kit in Ultrabeat. It's pretty basic! I'll then create a Bus Send for Bus 1 on my Ultrabeat channel and turn it up to 0db.

Now I'm going to load Noise loop I made into the Space Designer that's been inserted on Bus 1 and turn it into a Delay effect!

I do this by choosing Load IR and Init from the IR sample drop down and navigating to my bounced audio file.

Upon playing my Ultrabeat sequence I can hear the result of the Convolution between the two audio files.

It's a bit of a mess at the moment and needs some tweaking. As you can hear the Noise Loop is playing all the way to the end every time it's triggered and convolved with the Ultrabeat sounds.

I'm going to take the Volume envelope and make it shorter. 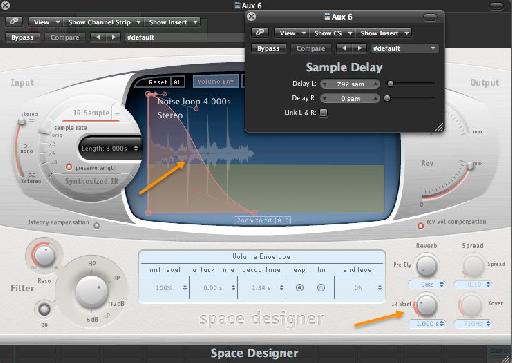 I've also adjusted the IR Start parameterï¿¼ (this can produce some interesting variations!). I just experimented till I came up with a result I was happy with. I've added some Sample Delay to widen the effect

The result is a subtle filtered delay effect as my Space Designer audio file imprints itself onto the Ultrabeat sounds being fed into it.

From here on in you can just repeat the process to create some really nice sounds effects that are otherwise impossible to achieve. Here is a loop with two additional Space Designers on different Busses.

Tips On Using This Technique

You may notice that the above loop has taken on a note. That's because one of the files loaded into Space Designer has pitch information and any pitch characteristics will be imprinted onto the incoming signal.

Using Noise as a source for your '˜IRs' will produce non-pitched effects as noise has no definable pitch.

I've got this chord made from a couple of waveforms in Omnisphere. It has a wide frequency range from low to high.

I'm going to feed this file with a 16th note noise loop (which has a Bandpass filter on it modulated by a Sample & Hold LFO).

The Noise loop only triggers the corresponding frequencies inside the IR, producing this.

The effect is very similar to that of vocoding. Notice how short the envelope is inside Space Designer.

Things can get very blurry when using this technique. Really short IR samples (I mean really short 1-100ms) will create more '˜EQ' type effects. Adjusting the Volume envelope to shorter times can help to clean up the effect and make it more defined.

I really hope this has given you the urge to get creative with this. The possibilities are limitless and can range from the highly disturbing to completely beautiful, so just experiment!

Don't have Omnisphere? Visit the Spectraonsics website for details on how to buy it and check out the macProVideo.com Omnisphere 101 tutorial.

Toby Pitman
For the past 20 years Toby has worked as a professional guitarist, programmer and producer. Clients include Sir Paul McCartney, George Michael, Shirley Bassey, Yusuf Islam, Giles Martin as well as the London 2012 Olympic Ceremonies. He has also worked extensively in TV, Advertising and Film. As well as composing himself he has also worked alongside many composers like David Arnold, Clint Mansell and Simon Franglen on many major film releases. An expert in synthesis and sound design Toby has also lectured for Apple on their Logic Pro music software which he has used since its days on the Atari. He has also worked as an educator for the International Guitar Foundation and the Brighton Institute of Modern Music teaching guitar. In his spare time (of which there is very little) he moonlights as a motion graphics artist specialising in Cinema 4D and After Effects.
Related Videos
Comments (23)