All Articles Logic Pro
Logic Pro: Make Gritty Beats Using Parallel Saturation
Gary Hiebner on Thu, March 29th 0 comments
Language
No one likes flat, lifeless drum tracks... And yours don't need to be either! Gary Hiebner digs out this tip on adding saturation to your beats in Logic Pro from his bag of music production tricks.

You have a drum track that you really like, but you feel you need to add something to it to really make it sizzle and stand out. One way to do this is to add some saturation or overdrive to add some color to the overall sound. But what you often find is that when you start placing these effects on the inserts of drum channel strips, you start to lose some of the body of your drum sound. A common technique to alleviate this is to use Parallel Saturation on your drums. I will explain how to do this in Logic Pro, but the same principle can be applied with other DAWs.

I am going to use a method similar to Parallel Compression (otherwise known as "NYC Compression") to create Parallel Saturation on my drums track. This will allow me to mix my dry sound and saturated sound together and get the perfect blend.

Here is what my drum track sounds like before I process it:

So what I have is an audio track in Logic. I have added a bus (Bus 1) to the channel strip. I am going to send a bit of this signal to Bus 1. You will start to hear the sound of the drum sound now on the auxillary/send bus channel, Bus 1.

Now time to move over to the Bus channel. On Bus 1, I want to add some form of Saturation/Overdrive. I want my drums to sound less static and clean so I am going to use an Amp emulation overdrive saturated sound. I have inserted Logic's Amp Designer on the channel strip. I have chosen the American stack and tweaked the settings a bit.

What you can do is solo the Bus channel strip so you only hear the distorted signal. Fiddle with the settings until you get a sound you like.

Here is my Bus channel soloed with the distorted drum sound:

Now it's time to blend the two together. I have decreased the amount of the Bus signal on my Audio Track. I've also decreased the volume on Bus 1 until the dry signal and saturated Bus sound good together. Spend some time with this until it is just right. You will probably find it easier mixing the two channels together when you have other elements in your project such as bass, guitar, synths, etc. as other sounds may determine how much of the saturated drum sound you wish to introduce into the mix. Each track will be different depending on the different elements.

I found that my low-end registers on my drum loop were sounding too distorted, so on the bus channel I have added a slight low cut to allow my lower sounds such as the Kick to be unaffected by the saturation. 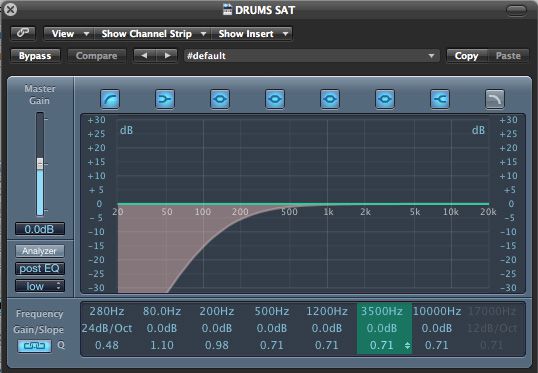 Here are my dry drums and saturated drums mixed together:

It adds a bit of color to the drums but still allows you to retain as much of the original sound as you desire. You could also automate the bus level so that in a section of your track the amount of saturation on the drums increases. This can create a nice effect before a drop in a track. Try it out.

Or you could even add modulation effects (such as phasers, chorus or ring modulators) before or after the distortion effects on the bus channel.

Take a listen to my drum loop now. On the Bus channel strip I have added a slight Ring Modulation before the Amp Designer plugin, and then a Flanger effect after it. It creates very unique drum sound that still retains the dynamics of the original loop.

I hope this has given you some extra ideas on how to spice up your beats in your mixes. You can also apply this technique to other elements like bass, guitars and synths, but I find it works particularly well with drums. Try it out in your next mix and see what results you get.