All Articles Logic Pro
Logic Pro: Building Sampler Instruments for the EXS24
Darren Burgos on Thu, April 12th 0 comments
Language
Sampling has been around since the first recording device. It's as useful today as it ever was. Darren Burgos digs out Logic's veteran sampler, EXS24, to show how to roll your own sampler instrument.

Building instruments for Logic Pro's EXS24 can be complex, but I'll show you that it doesn't have to be! In this article we'll create a simple sustained synth/string instrument. This is not intended to show you all the features of EXS24's instrument editor (MPV has a video tutorial for that!). It's meant as an introduction for those who want to get started building their own instruments.

Unlike virtual synthesizers, samplers sound 'tighter' since they're playing back recordings, and not virtual oscillators. Also, the EXS24 has some cool overlooked feature, like 2 tempo-synchronized LFOs (Don't get jealous, ES2!), and a slider called Pitcher that allows you do interesting pitch changes via note velocity.

We'll start by finding source audio to build the sampler instrument with. I chose a simple synth riff, but there's lots of stuff you can try from the loop browser. Try using one of your own sounds saved as audio, or if there's an isolated sound you like in a song, use that by dragging the entire track into Logic. Start by cutting away everything you don't need. In my case, I've chosen to keep only the very first note within the audio. 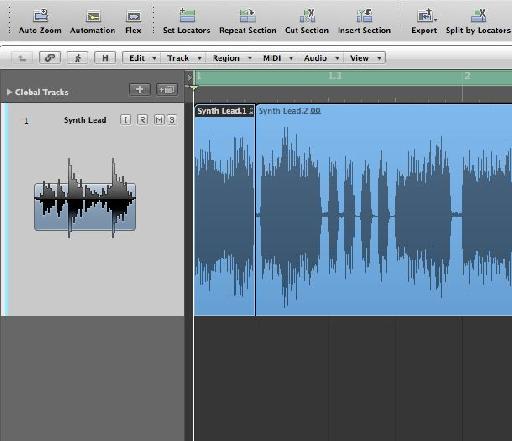 So that we only use the small section we cut from the source audio, and to make sure we're not damaging the original file, we should make a copy at this point. From the local Audio menu, select Convert Regions to New Audio Files.

If you're using an Apple Loop (from the Loop Browser), you must complete this step as Apple Loops can't be edited in the Sample Editor (Step 3 below). Change the file format to AIFF before saving.

If your project is saved, the window that appears will default to its audio folder. Before you click Save, you might consider saving the audio to a common location if you plan on using this instrument in other projects. EXS24's built-in instrument collection uses a folder called 'EXS Factory Samples' to store all its samples in. You can use this same location, or create a new folder anywhere on a drive that is always on and available. This way it's less likely the source audio files will be renamed or deleted accidentally. 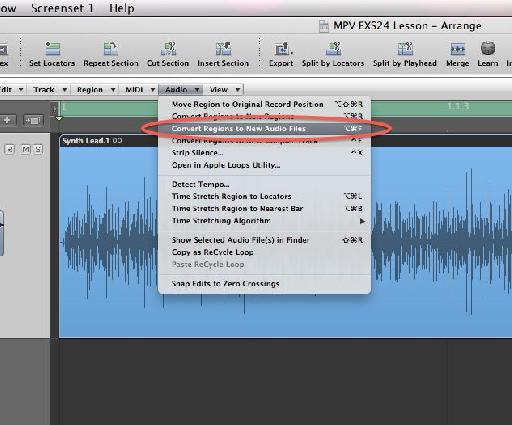 Step 3 - Loop the audio in the Sample Editor'¨

Next, double click on the loop/region (or press W), to open the Sample Editor. With the Arrow tool, select an area within the middle of the audio, and from the local Edit Menu, choose Selection -> Sample Loop. 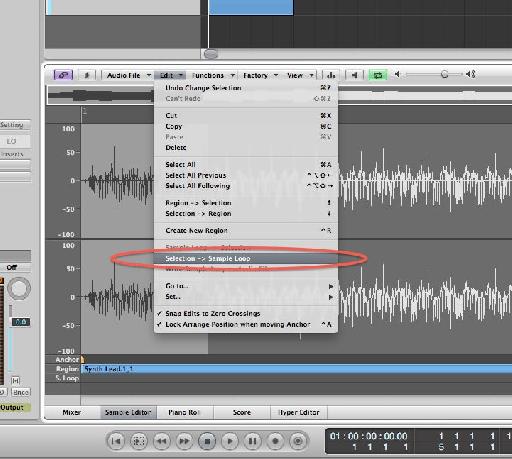 A green strip will appear in the S. Loop area below Anchor and Region. 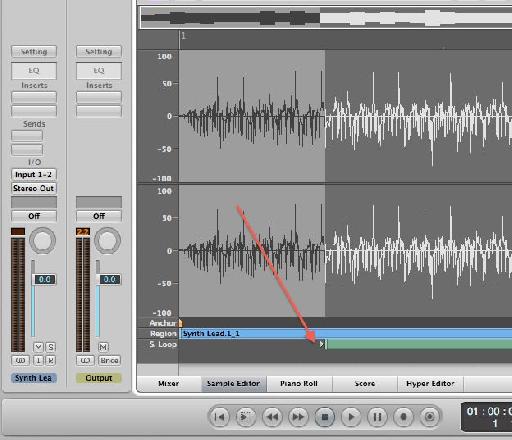 Make sure the loop button is enabled, hit the Space bar so the loop plays, and adjust its start and end position so the loop sounds as smooth as possible. You do this by moving the left and right edges of the green strip.

If it's not perfect now, you can always add a small cross fade in EXS24's editor later on. 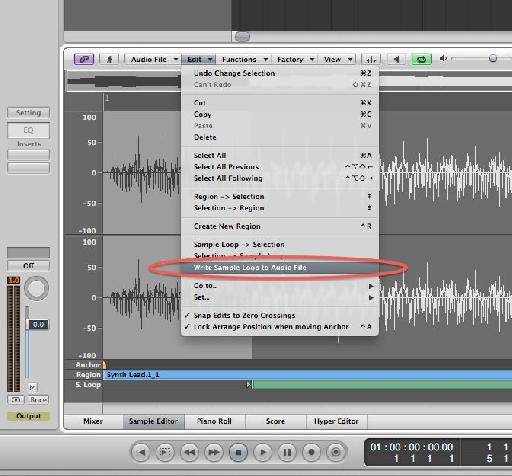 Back in the Arrange Window, create a new software instrument and load up an EXS24. Click on the 'edit' button in the top right corner of the EXS24. 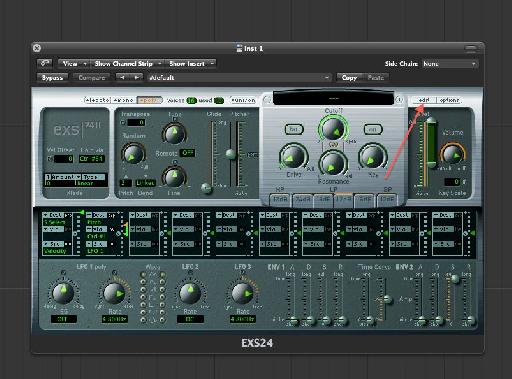 The window that opens is called the Instrument Editor: 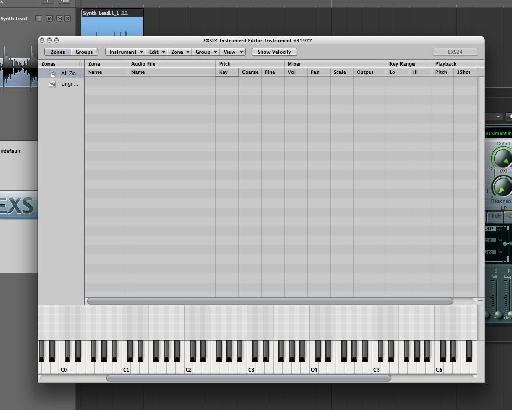 There's a lot going on in here, but we'll only be focusing on a few parameters, so don't worry!

In some ways, the Editor is a lot like iTunes. 'Zones' are individual audio files/ samples (like songs in iTunes), and 'Groups' are collections of Zones (like Playlists). First, let's name and save the instrument we're making. From the EXS24 Editor's menu choose Instrument > Save As.

Before clicking Save, you might want to create a new folder at this point to place your saved instruments within it. This will make it easier to find them from EXS24's instrument selector, and from the Library.

If necessary, push the EXS24 Editor aside, so in the Arrange Window you can see the region you looped in the Sample Editor. Drag the region directly into the open EXS24 Instrument Editor's window. 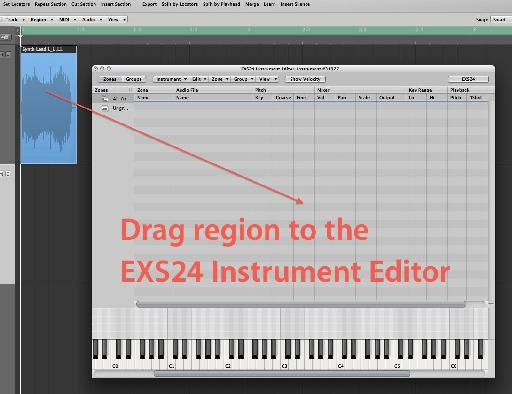 Across the bottom of the screen where the keyboard is, you'll now see the audio/region you dragged in represented as a bar stretched across the keys. It's now considered a 'Zone.' You can adjust the bar length of Zone 1, so the sample plays back only on a portion of the keys by pulling in the far left and right sides. This is how you create 'splits.'

If you drag in multiple samples, you can specifically adjust the keys each sample is played across. Since we're only using one sample/zone in this lesson, we'll leave it as is. 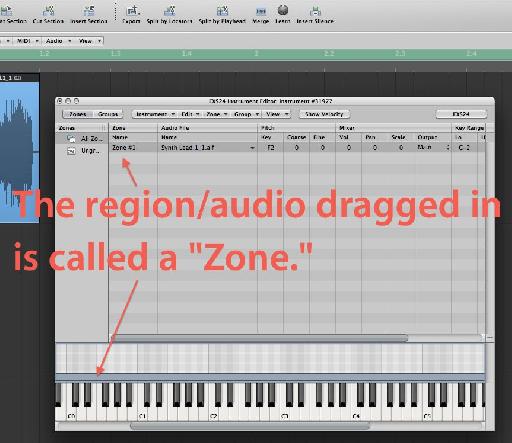 Step 6 - Read the Loop Setting from the Audio File'¨

Play the sound on you keyboard. You'll notice that the loop you chose in the Sample Editor isn't set correctly. The sound plays from the beginning to the end. You can fix this by selecting Update Selected Zone(s) Info From Audio File (from the local Zone menu).

Click OK on the two dialog boxes that appear, and now your loop will cycle properly when you hold down a note on your controller. 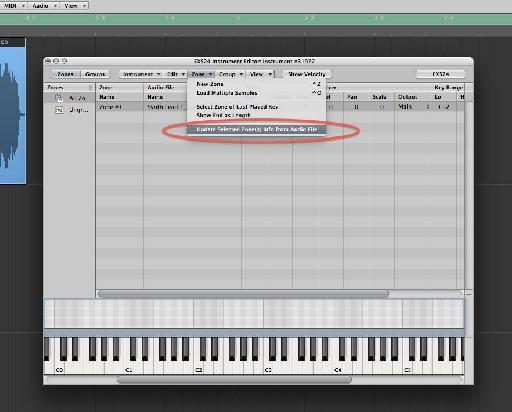 '¨If the loop doesn't sound perfect, you can add a small crossfade. From the local View menu, select Zone: Loop. This will reveal the Loop header (you may have to scroll to see it). From the 'XFade' column, adjust this value till the loop smooths out. If the XFade causes a dip in volume, check off the 'E. Pwr' box; it will raise the gain within the crossfade area. 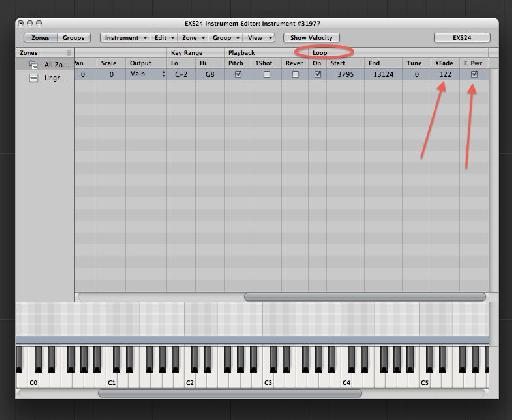 You may need to adjust the pitch so the sound is represented correctly across the keys. If for example you grabbed a sound from a song you like, the EXS24 has no idea what note you edited out of that track. You should adjust the 'Coarse' parameter under the Pitch column till the sound is pitched to the correct musical note.

An easy way to do this, is to launch another Software Instrument, enable its 'R' button so both instruments play simultaneously. You then play a single note on your controller and adjust the Coarse parameter value, till the pitch matches that of the other software instrument.

Now, from the local Instrument menu, select Save. Congratulations: You've made your first EXS24 instrument! You load it just like any other EXS24 instrument by clicking on the black selector area (directly above EXS24's Cutoff Filter). 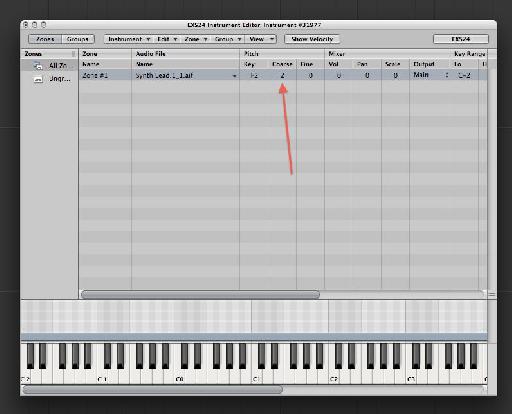