Getting a tight Trance or Psy-Trance bass sound can be a difficult thing in Logic Pro. Some bass sounds have the perfect tone, but they never seem to 'hit' the same way every time. On the other hand, some sounds are tight, but don't hold the low frequencies in just the right way. In this lesson I'll show you how to use the ES2 to generate a tight and thick sound perfect for repetitive or arpeggiated bass parts.

The nature of analog synthesis is actually unpredictable. When a physical analog synthesizer generates a wave, its oscillators are never in the same place when you play a key on its keyboard. This is a desirable effect for certain types of electronic music like Electro, Indie Dance, or music with slower tempos like Hip Hop. For Trance and Psy-Trance though, a more precise sound is necessary. Trance and Psy-Trance can reach speeds of 150 BPM. This is not half time like Dubstep. Trance/Psy-Trance is mostly 4 on the floor (a kick on every beat), and the snare is on the 2 and 4. Often a bass line follows 16th notes, so it's important for the tone to be as tight as possible or you're asking for mud at these speeds!

Let's open an ES2 and load the preset called Analog Saw 3 Osc from the Tutorial Settings menu. Move down on your keyboard and play some notes in the 1 octave range (you may have to press the transpose/octave button on your controller). This sound is a perfect example of a 'loose' tone, but we'll transform it into something much tighter. 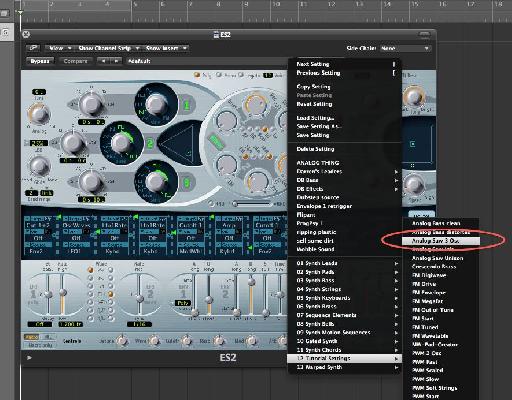 Let's start with some of the global parameters. Change the sound from Poly to Mono, then turn on Unison and select 1 under Voices. The Analog knob is also considered a global parameter, so set its value to zero.

Now, in the top right corner of the ES2 you'll see a small drop-down menu called 'Osc Start.' This is the key to getting a tight sound. Change the value from 'free' to 'soft' or 'hard.' Now play some notes in rapid succession. Sounds a lot tighter now, huh? Toggle back and forth between the three values to hear the difference. What's actually happening, is the ES2 is 'restarting' the oscillator every time you hit a new note. In some ways, it's kind of like a sampler now; it's as if now it's playing back a recording that hits the same way every time. 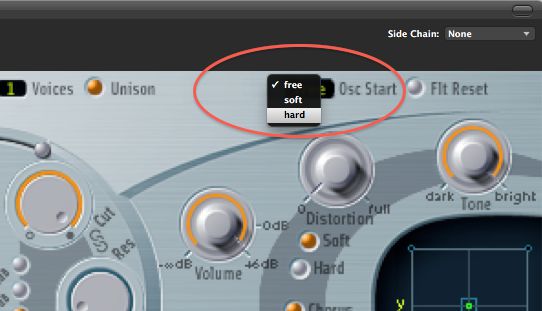 There are other third-party synths with Osc Start functionality, but they're not named the same. Lennar Digital's Sylenth1 for example calls it 'Retrig' or in Rob Papen Predator you uncheck the 'Free' button for each oscillator.

Next, let's set the Oscillators: In this case, I don't need all three of them. I'm going to leave Osc 1 set to a sawtooth wave, but I'm going to change Osc 2 to a square wave (see image below). Osc 3 I'll simply turn off (click the number 3 on the third oscillator). Now let's set the range on each oscillator: Osc 1 to -12, and Osc 2 to 0. Set the Oscillator Mix Triangle to roughly between 70% Osc1 and 30% Osc2 (see image below). 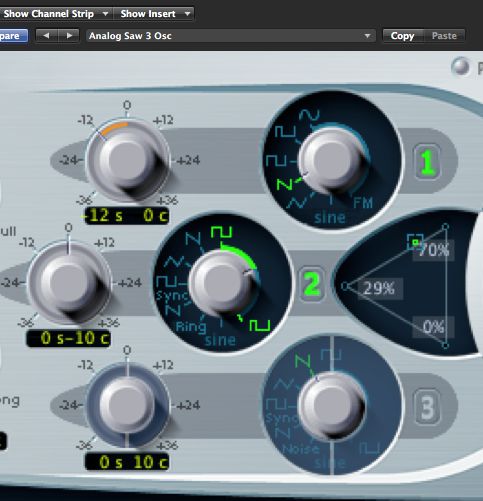 Let's jump to the Router now: The first source is already set to what we need (Cutoff 2). Change the 'Via' to 'Velo', and the 'Source' to 'Env1.' Turn off the second target (the rest should already be set of Off). Set the modulation intensity sliders close to what I have in the image below. When notes are played soft or hard, the filter will open and close, respectively. You won't hear the effect right now, but soon enough! 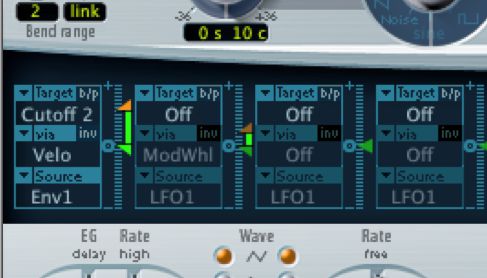 Now to the Envelopes: I'm using Env1 to modify the Filter. I'm using it instead of Env2 because it's the only one that can be put into 'Retrig' mode. This mode quite literally re-triggers the envelope every time a note is pressed (you'll get a tighter a sound!). Set the decay on Env1 to around 380 ms. Skip Env2 since it's not used in this sound. Adjust Env3's Release so to around 30 ms.

Pull the Cutoff of Filter 2 down to a value around 100. I'm using the 24dB Filter, but the 12dB can be quite cool, too. We're not using any Resonance so pull it all the way down to zero. 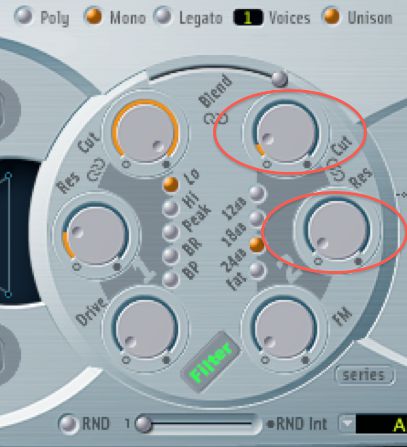 We'll need something for our bass to bounce off, so pull in your favorite kick and write a simple 4 on the floor pattern, or pull in an Apple Loop. The Trance Stride Beat 01 Apple Loop has a pretty nice kick sound, with some hats. I'll be using a kick I created with an ES1. Set your tempo to between 130 to 140 BPM.

Now let's create a simple sequence. Control-click the first bar of the track with the ES2 on it, and select 'Create Empty MIDI Region.'

Then, put a cycle around the region and play it. Double-click to open the empty region in the Piano Roll. Grab the Pencil Tool and draw in some notes. I'm only using a single note (F#1), but try a few different ones (preferably in the 1 to 2 octave range). In the image below, I've skipped the down beats; this is a simple trick that allows the kick to really punch through since the bass never actually plays when the kick plays. 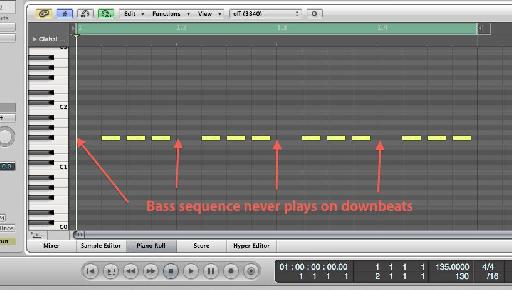 While the sequence is looping, play with the length of individual notes by dragging the right side of the note in or out. This will create a cool syncopated feel (this is emphasized when we lowered the release on Env3 (Step 6 above). Now grab the velocity tool and try different velocity levels. Since we set velocity to effect the cutoff (Step 5 Router), you should get some interesting variations as the filter opens and closes based on the velocity. If you wan't more 'punch' from the bass, try enabling the 'Flt Reset' button (top right corner of ES2). It will sound quite 'clicky,' so adjust Env3's Attack a bit. Try around 2.7 ms. 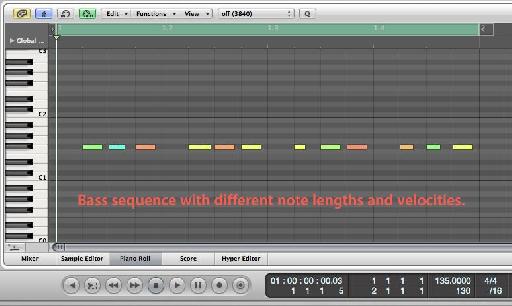 Below is the bass preset you can load into the ES2... Dream It. Do It.
Do you want to learn Mixing Electronica?
Yes, I want to learn!
No Thanks, I just want to read the article.
Feedback
How are we doing?
We'd love your thoughts, feedback and questions regarding our new site. All feedback is appreciated!
We do not respond to this form! If you need support, please visit our support page.
Thank you for your input!
Your message has been successfully sent
Course Advisor
Don't Know Where To Start?
Ask A Course Advisor