All Articles Logic Pro
Logic Pro Tutorial: Score Sets, Part 3
Peter Schwartz on Wed, July 13th 0 comments
Language
In this third and final article in my series on Score Sets in Logic Pro, we're going see how Score Sets can be used to create two different score displays from the same parts in the arrangement.

In this third and final article in my series on Score Sets in Logic Pro, we're going see how Score Sets can be used to create two different score displays from the same parts in the arrangement: a full conductor's score and, a section score. We're also going to look at the options we have for naming each instrument in the score.

Read the 1st Part of this Score Sets in Logic series here and the 2nd Part here.

In Figure 1, we see the score for a short transitional orchestral cue in concert pitch (C score). The full conductor's score was formatted for 11"x17" paper (tabloid size), and for this article I've deliberately removed many of the dynamic markings and other notations to make the score as legible as possible on-screen. 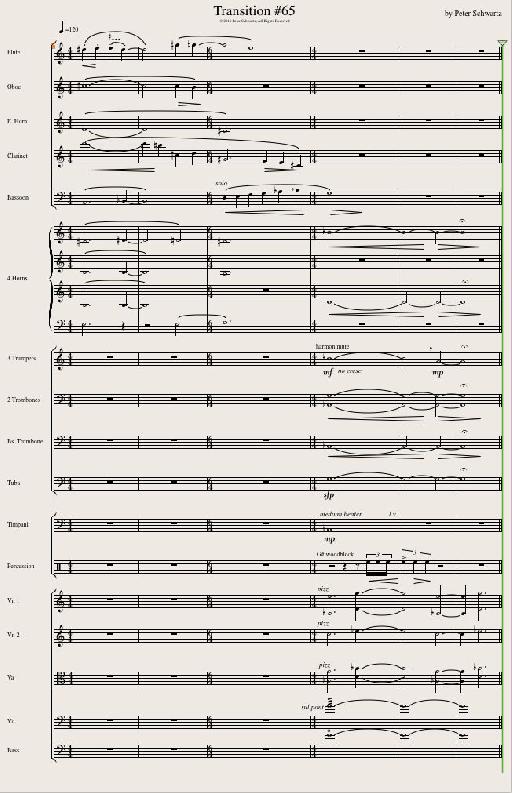 Before we continue, let's look at my arrange page (see Figure 2). The assignment of instrument sounds from Track 1 onward already corresponds to score order, starting with the winds, then brass, timp, percussion and finally, strings. So in this case it won't be necessary to reorder the parts using a Score Set. However, we're still going to create a custom Score Set for other purposes. Read on! 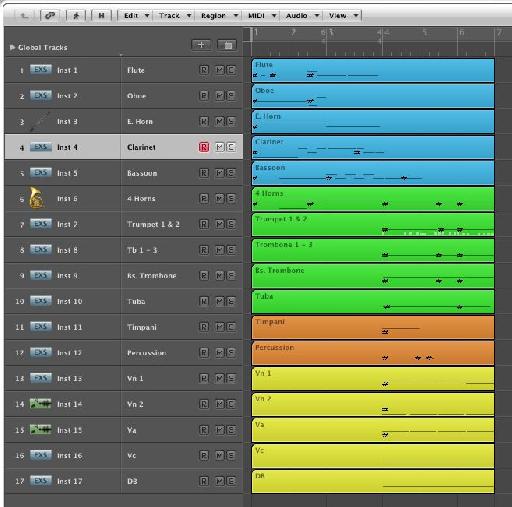 In Figure 3 we see the the Score Set editor, showing details of the Set I created from these parts. As described in the previous articles, I created this Set by selecting all regions in the arrangement and opening a new score editor window. I then renamed this Set to "Full Score". Very original, don't you think?

There remain, however, several interesting discrepancies between what we see in the Arrange page and what we see in the score: the instrument names! If you compare the names shown in the Conductor's score with the channel strip names as seen in the second column of the Track Header, you'll find that they don't all match.

What accounts for the differences? Let's find out!

In the editor we see two columns, "Full Name" and "Short Name". And when you create a Score Set, Logic will automatically adopt the channel strip name for the Full Name column'"a real time saver! But these names can be changed, if desired. And I did so desire, and here's the procedure:

Start by single-clicking on an instrument's name in the Full Name column. Logic will then display the cryptic notation of "@(reference)", as seen in Figure 4. At first glance this might appear to be some kind of bug, but it's just an indication that Logic is using the channel strip name as the default Full Name for that instrument. To set your mind at ease, the "@(reference)" gobbledygook has been around since Day One, so no need to worry that Logic is freaking out when you see this.

At this point, simply type in a new name as you want it to appear in the score. In this case, I'm changing the name of the trombone section from "Tb 1 - 3" to "2 Trombones". Note that if you wanted to change the Full Name a second time, you would no longer see the "@(reference)" indication. However, if you wanted to restore the Full Name to its original channel strip name, simply enter "@(reference)", without the quotes.

Some additional fine points about naming:

'¢ when you change the Full Name in the Score Sets editor, it will not, in turn, change the channel strip name. And we'll see shortly the benefits of this one-way behavior.

I'm Allowed to Change My Mind, Aren't I?

In conceiving the score, but prior to writing any music, I had in mind to write for 2 trumpets and 3 tenor trombones, hence the names I originally gave the channel strips for my trumpet and trombone parts. Ultimately though, I opted to use one more trumpet and one less 'bone. Rather than rename my channel strips to reflect the new instrumentation, I changed the names for the trumpets and 'bones (amongst others) right in the Score Set. Now, you might be wondering, would it have been easier'"or perhaps somehow better'"to change the channel strip names and have those names automatically appear in the Full Name of the Score Set instead of changing the names in the editor itself? To answer that question, let's see how things played out...

If the only score I was producing from this arrangement was a conductor's score, where I was to rename the parts would be one of those "six of one, half a dozen of the other" situations. After all, changing the names would have to be done somewhere, and I opted to change them in the Score Set, not the channel strip names. At this point I know my music, so having the channel strip name itself reflect the instrumentation will be the least of my otherwise normally pedantic concerns. Furthermore, for our purposes, this situation demonstrates the one-way nature of changing the default Full Name in the editor:  doing this doesn't alter the channel strip name.

As it turned out, I needed to prepare a second, brass-only score for my contractor for which I decided to name the brass parts differently, and here's how that played out...

My orchestral contractor wanted to see a brass-only score so he could assess the tessitura of the parts before recommending specific players. Being that we're living in 21st century, naturally he asked if I could email him the brass score. "Of course!", I told him, thinking in the back of my mind, "I have Logic, I can do...anything!" So let's see how I went about creating that.

Now, let's recall that the conductor's score was formatted for 11" x 17" paper. For the contractor, however, I wanted to send him something he could print out on normal 8.5" x 11" paper (that's like A3 to my UK brethren and sistren). But when I did this'"by changing the paper size in Logic's Page Setup'"the overall proportions of the score changed. As a result, some of the names, such as "Bs. Trombone" and "3 Trumpets" ended up taking up a lot of space in the left margin and made the score look awkward. To remedy this I decided to abbreviate the names of several instruments to improve the appearance of this brass-only score (Figure 6). 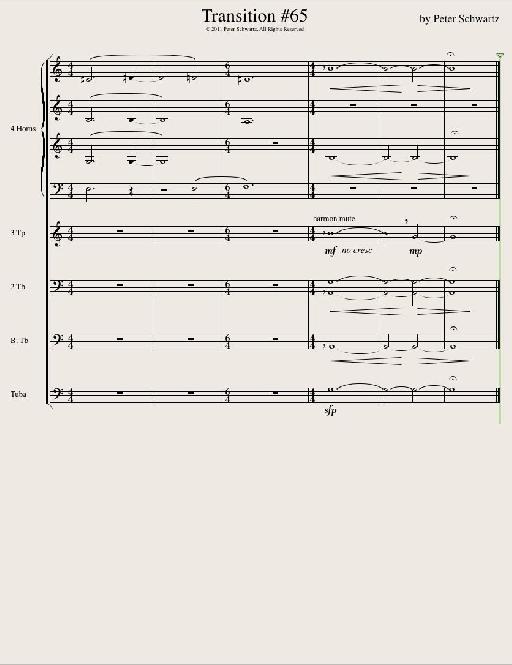 Figure 6: a brass section score derived from the full arrangement.

An abbreviated form of an instrument name often appears beside or above the staff on pages of a score subsequent to the first page, and Logic provides a "short name" feature for this purpose. As we saw in Figure 1'"the conductor's score'"the entire cue fits nicely on a single tabloid page. However, it might be nice to format it as two pages, making the break at the point where the woodwinds end and the rest of the brass, percussion and strings, enter. As we see below (Figure 7) the short names I entered in the Score Set (Figure 3) appear to the left of each part in the two-page version of the score. 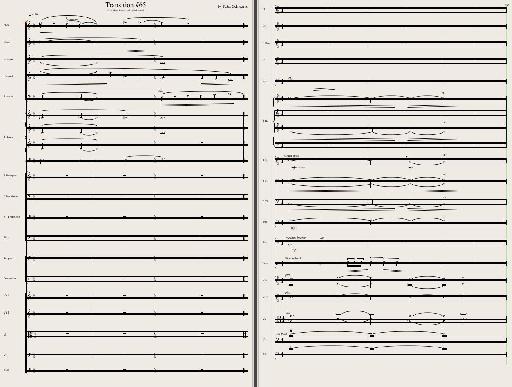 And when they say "short", they really mean short! Each short name is limited to a whopping seven whole characters!

When it comes to displaying the full and short names, we have several options for deciding which names appear in the score, and on which pages. However, these options aren't set in the Score Set editor itself. These are global score settings made within Project Settings > Score > Numbers and Names (Figure 8)

Below, a review, as well as some of the finer points of naming parts in a Score Set:

'¢ If you haven't altered the default Full Names in any score set, any changes you make to the names of channel strips will be reflected and updated in all Score Sets.

'¢ Altering the Full Name of an instrument in any Score Set will not affect the name of the channel strip.

'¢ Each Score Set's full and short names can be different from any other (and remember, a project can contain any number of separate and individualized Score Sets).

'¢ Naming options are found in the Score section of Project Settings.