All Articles Logic Pro
Logic Pro Tutorial: Score Sets, Part 1
Peter Schwartz on Tue, April 12th 2 comments
Language
I don't know about you, but when I'm composing in Logic, the last thing on my mind is how my parts are going to look when they're printed out.Â I'm usually in the throes ofÂ composing, on the fly, cre .

I don't know about you, but when I'm composing in Logic, the last thing on my mind is how my parts are going to look when they're printed out. I'm usually in the throes of composing, on the fly, creating tracks and loading up sounds either as I need them or as the inspiration strikes. Were anyone else to look at my arrangement page, they'd probably cringe at what might appear to be a chaotic splash of regions across the screen. Of course I'm intimately familiar with the "mess" I created so it all makes sense to me.

But when the need comes to print out a score, particularly for orchestral music, the order of the instruments on the page can't reflect the random order of my arrangement's tracks. They must appear in score order -- the traditional succession of instrument parts as they appear from top to bottom on the page. And we certainly wouldn't see that if we opened the score editor on one of my projects because the standard, or default behavior of the score editor, is to display notation from MIDI regions in the order of the tracks in the arrangement.

To produce a proper conductor's score, then, would require one of two approaches: (laboriously) dragging tracks around in the arrangement to put the parts in score order, or, the one which I regularly use and prefer --- to create a Score Set and use it to "force" Logic to display the tracks as notation in the order I want to see them!

Order Out of Chaos

In figure 1 below, we see the parts displayed in the same order as the tracks in my arrangement. Compare this with figure 2 where I'm using a Score Set to create a different display of those same parts, but this time in score order. And with this we see one of the primary purposes of the Score Sets feature: to deliberately override or alter the Score Editor's default behavior for displaying notation.

Figure 1: Instruments appear in the score in the order of the tracks in the arrange page. Note the selected score set, "All Instruments"

Figure 2: instruments shown in score order without shuffling the order of the tracks in the arrange page. Note the custom Score Set I created to accomplish this, which I named "score order"

Score Sets have other uses and features. Each Score Set (and it appears you can have an unlimited number of them) can be programmed to determine where (or if) bar lines connect between parts, and the manner in which brackets and braces appear in the score. Additionally, there are several instrument naming options (for overriding the default track names), parameters for adjusting the overall scale of the score, and perhaps one of the most useful features of all: the ability to create notation displays where only certain instruments are visible from amongst all the tracks in your arrangement. For example, one Score Set can be set to display only, say, the oboe part, while another Score Set can display all of the instruments of the woodwind section but not the strings. And all these things can be done without having to mute tracks or regions in your arrangement.

But before I get too far ahead of the story, let's get familiar with some...

Located in the upper left-hand corner of the score editor is an item that appears to be a menu (the item labeled "All Instruments" in Figure 1, and "score order" in Figure 2). This is in fact the Score Sets menu, but it's also serves to access the Score Sets editor. Here's how it works: 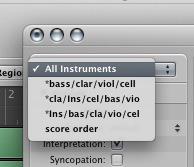 Figure 3: The Score Sets menu displaying the default "All Instruments" and custom-created score sets. The asterisks indicate score sets created by Logic automatically, as described below.

Having opened the Score Sets editor with "All Instruments" selected, we see a note that reads "This default Score Set will display all instruments...". In my way of looking at things, I don't consider it to be a Score Set at all. "All Instruments" is simply an indication that no Score Set has been selected, meaning that the score editor will display notation according to normal, default score editor display behavior. It must be noted that what we see in the score display is somewhat dependent on the setting of the Link Mode button in the score editor. And although I won't dwell on their influence on the score display in this article, the examples I'm presenting here were all produced with Link Mode set to "no link" (gray).

Creating custom Score Sets is extremely easy! Try this: create 5 new instrument tracks and use the pencil tool to create a few blank regions on each track (similar to what you see in figure 1). You don't need to enter any notes in the score, the blank regions will do for now.

Next, in the arrangement, select only the top three regions and open the score editor (preferably, a separate score editor window for greater screen real estate). In the Score Sets menu you'll now see:  *Inst 1/Inst2/Inst3

What you've just done is used Logic's automatic Score Set creation utility! By selecting regions and then opening the score editor, Logic will create a Score Set which includes only the instruments associated with those regions. You can rename the Score Set by double-clicking on the Score Set menu, selecting the newly created Score Set (if it's not already selected -- and it may not be) and then single-clicking on the name field to enter a new name.

To switch the score display to show all instruments in the score, simply select "All Instruments" from the Score Sets menu. You can now switch back and forth between the display of the full score and the three instruments by selecting the appropriate Score Set!

Now, Logic wouldn't be Logic if there weren't multiple methods for achieving the same result. So let's look at additional ways to create a custom Score Set: 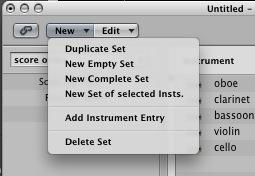 If you created an Empty Set, you'd add instruments by double-clicking in the "Instrument" column (shown in Figure 5 hiding under the menu). At that point, clicking/holding on the new entry will provide a list of whatever instrument channels or MIDI instruments exist in your project. The other items in the menu are fairly self-explanatory. And should you venture into this area of the Score Sets editor, you'll quickly discover that the editor's look and feel is quite a "throw back" to much earlier versions of Logic. Not "slick", but effective.

Well, that's all the space we have for in this article, but look out for my follow-up articles on using Score Sets here at macProVideo and check out the Logic tutorials here and Peter's MIDI 101 Video Tutorial too!

Read Part 2 of this series here: