All Articles Logic Pro
Logic Pro X: A Guide to Multitrack MIDI Recording
Joe Albano on Mon, July 6th 14 comments
Language
Logic Pro X has simplifed the process of recording multiple MIDI tracks. That being said, you need to know the correct settings and quirks which is why Joe Albano is on-hand to show you how.

We all know that Logic Pro X is one of the most powerful and flexible DAWs out there, especially when it comes to MIDI. Along with its large collection of Virtual Instruments, Logic brings sophisticated MIDI editing capabilities, and, for the real tweakheads out there, extensive MIDI processing, courtesy of new features like MIDI Scripting, as well as long-term ones like the (MIDI programming) Environment. That makes it all the more curious when something that's often simple to set up in other, often less capable workstations, is, to put it politely, a little less 'logical''"perhaps a bit more convoluted than it needs to be'"in Logic. Recording multitrack MIDI performances can sometimes be one of those tasks.

Now, to be fair, it has gotten much, much easier in Logic X, and certain configurations that used to require a trip to the Environment can now be set up easily in the main Track (Arrange) window. But there are still scenarios that may require a little tweaking. I'm going to lay out the basic approaches in Logic to recording multiple MIDI Instruments at the same time.

There are two ways you might go about recording multitrack MIDI in Logic. One scenario is when you want to layer several Instruments together for a big, rich sound, play the combination live, triggering three or four different Instruments together, and record the results. There are a couple of ways to do this, and, in Logic X, it's much simpler than ever.

The other scenario is what Logic terms Multiplayer Recording. This is where you have several (i.e. two or three) MIDI musicians performing together live, playing on separate MIDI controllers (like keyboards and MIDI drums), each triggering a different Virtual Instrument in Logic, and you want to record them together, ending up with individual MIDI parts on the individual Instrument tracks when you hit Stop. That's also much more logical in Logic X, but it's still not as straightforward, in every situation, as it could be. I'll come back to that'"first, let's take a look at two ways to record layered Instruments.

The easiest way to layer up Virtual Instruments is to simply record-enable several MIDI tracks at once. 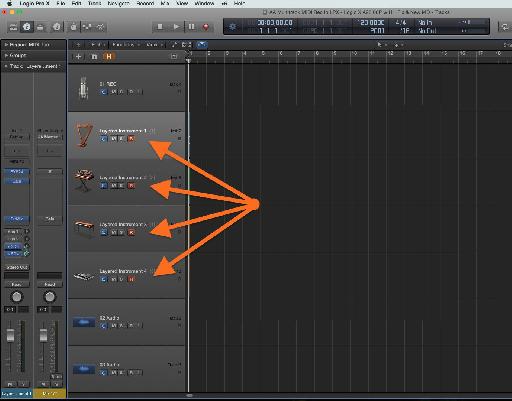 When you play, you'll hear them all, and when you record, you'll get a MIDI Region on the selected track, and Alias Regions on the other record-enabled tracks. 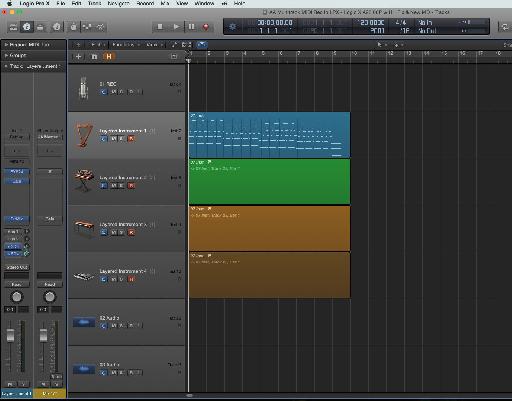 Fig 2 Four layered Instruments, with a recorded MID Region on the top track, and Aliases on the other tracks

Audio: The four Instruments, separately, then layered together, as they were played and recorded, as above:

Alias Regions don't contain any data, they're just pointers to the main Region, so if you want to make edits to the MIDI data (quantize, pitch changes, etc), you only have to tweak that one Region, and the other Instruments will follow. But you do need to keep the Aliases together with the main Regions to preserve the layering.

Now, this is pretty straightforward, but it is contingent on a particular setting in the Project Settings for that song. Under File > Project Settings > Recording you'll find an option entitled 'Auto demix by channel if multitrack recording'. 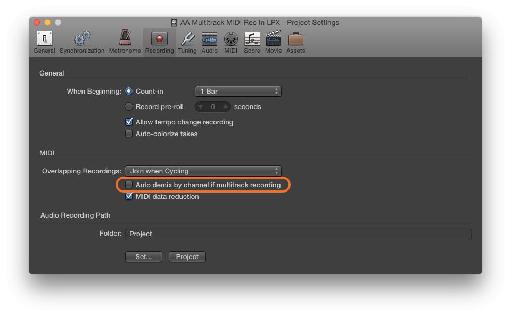 Fig 3 The Project Settings option 'Auto demix by channel if multitrack recording', which must be set Off for layering, and On for multiplayer recording

This must be un-checked for the layering of Instruments to work as I just described'"that is the default, but since it's a Project Setting, it might be on when you open up an older song, or get a Project from a collaborator. (This option is actually for the other scenario, multiplayer recording, which I'll come back to in a minute).

An even easier way to play and record multiple Instruments is by combining them into a Track Stack. A Track Stack, as you may know, puts several tracks under the same umbrella, making it easier to treat then as a unit. There are two types'"Folder Stacks, and Summing Stacks'"you just select the tracks you want to include, right-click, choose 'Create Track Stack' (Shift-Command-D), and select the type you want. 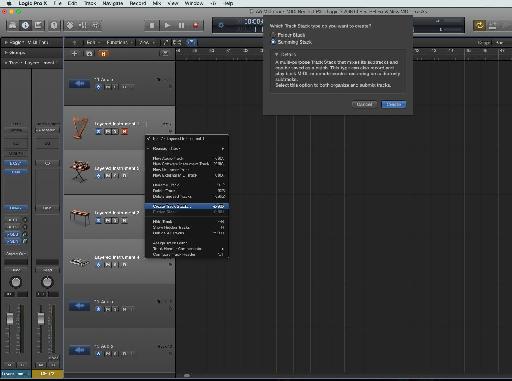 With Folder stacks, recording layered instruments is the same as I just went through, but Summing Stacks take a slightly different approach. A Summing Stack creates an Aux'"the Track Stack master'"and re-routes the audio outputs of all the tracks you add to it through that Aux. But it has its own Record-Enable button, and routes any incoming MIDI to all the Tracks within it. When you record, you get only one MIDI Region, on that Track Stack master track, but all the Instruments within the Stack will play from that Region'"a much more elegant approach. 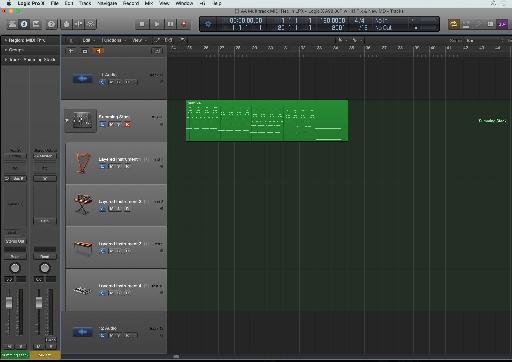 Fig 5 A Summing (Track) Stack, with four (layered) Instruments all receiving MIDI data from the MIDI Region on the Track Stack master track

You can also close the Stack so only the Stack master track is showing (independently for the Arrange and Mix displays), to consolidate space in a busy mix/arrangement'"the internal tracks still play normally. Summing Stacks are also great for a multi-Instrument like a big drum kit, with different drums in different Instruments.

The band plays on

The other MIDI multitrack scenario, Multiplayer Recording, is also easy enough to implement now, in Logic X, but it is a bit less elegant. Again, this is when you have a MIDI band, of several players on individual controllers, triggering different Logic Instruments, and you want to record them playing live, ending up with separate MIDI Regions for each Instrument/track. Many DAWs simply let you choose a different MIDI input (from the available MIDI devices) for each Virtual Instrument track, arm them all, and Bob's Your Uncle. But Logic is a little more restrictive..

Logic forces you to channelize, in order to assign the different MIDI controllers to different Instrument tracks. This means utilizing the old-fashioned MIDI Channel data that's still part of every MIDI message (which Logic conveniently ignores when recording one Instrument at a time). There are 16 MIDI Channels in the spec, and each Logic Instrument must be set to receive MIDI data on a different Channel number. This is set in the Track Inspector pane, on the left of the Main window. 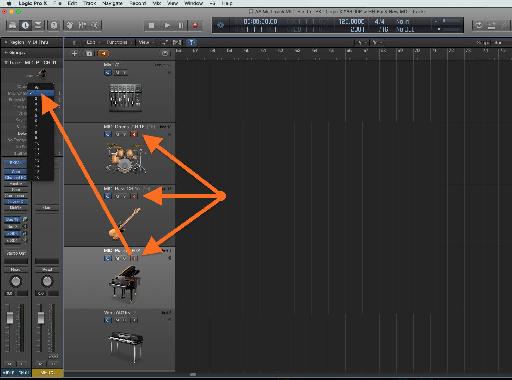 Fig 6 Setting the (receiving) MIDI Channel for a Logic Instrument, in the Track Inspector pane

The MIDI players' MIDI controllers must then be set to transmit their MIDI data on the correct corresponding Channels, to address the various Instruments separately. And, finally, that Project Setting you saw earlier, 'Auto demix by channel if multitrack recording' (Fig 3), must now be enabled (checked) for this to work properly (remember, I mentioned that it was intended for multiplayer recording).

When all this is set up, you can once again record-enable several Instrument tracks. The correct player will now be routed to each Instrument (independently, with no layering), and you can record them live, as a group. During recording, you'll see only one MIDI Region being recorded, but when the recording's done, and you hit Stop, the MIDI (performance) data will automatically be split up by MIDI Channel, and different Regions will appear correctly on each matching Instrument track. These are independent regions'"no Aliases'"and the result is the same as if you'd recorded the parts one by one. 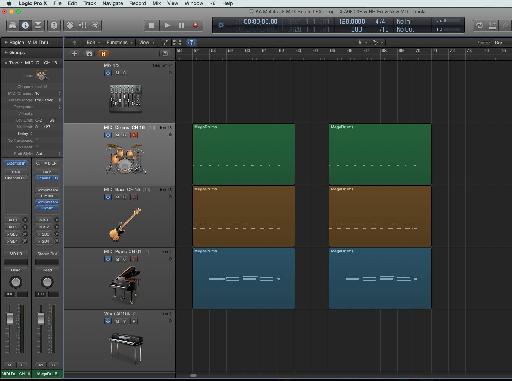 Even though this is less straightforward, conceptually, than the simpler MIDI-input-per-track method, it does work well. The only wrinkle is if you find yourself with one or more MIDI controllers that don't transmit on any channel except Channel 1'"unlikely nowadays, but still possible, especially with some older gear or certain consumer-oriented MIDI piano controllers. In that case, you may have to pay a visit to the (sometimes scary) MIDI Environment's Click & Ports layer, where you can grab the individual controllers' MIDI data streams from the Physical Input object (which represents the actual MIDI hardware devices that Logic sees hooked up to your computer), and re-channelize the incoming MIDI data there, with real-time Transformers, before sending it all on to the Sequencer Input object, which represents (all) the selected, record-armed Instrument tracks. Fig 8 MIDI Data from three MIDI controllers, being channelized in Logic's Enviroment for multiplayer recording, before being sent on the Sequencer Input, which will distribute the data from the different performers to the correct Instrument tracks with the matching MIDI Channels

Fortunately, this is not too likely a scenario these days, and, though it's easy enough to do, it's even easier if you can just set things up directly in the main window, as described.

So, that's a quick look into the world of multitrack MIDI recording in Logic. Long-time Logic users have always considered certain aspects of this to be kind of a kludge, but Logic Pro X has taken significant steps to simplify these procedures, so, once you're familiar with the necessary settings and occasional quirks, it should be easy enough to either dial up big fat layers of sound, or record that slammin' live MIDI band, with a minimum of fuss.

Joe Albano
Joe is a musician, engineer, and producer in NYC. Over the years, as a small studio operator and freelance engineer, he's made recordings of all types from music & album production to v/o & post. He's also taught all aspects of recording and music technology at several NY audio schools, and has been writing articles for Recording magazine for many years.
Related Videos
Comments (14)