Most people think of Ultrabeat as a drum machine. In this article I want to show you that Ultrabeat can be used to trigger effects on your tracks much like some of the third party effect sequencers out there. You'll be able to use Ultrabeat's step sequencer to trigger different effects on anything you feed through it.

Either launch an empty Logic project, or open an existing song. Add a new software instrument track and make it a multi-out Ultrabeat. 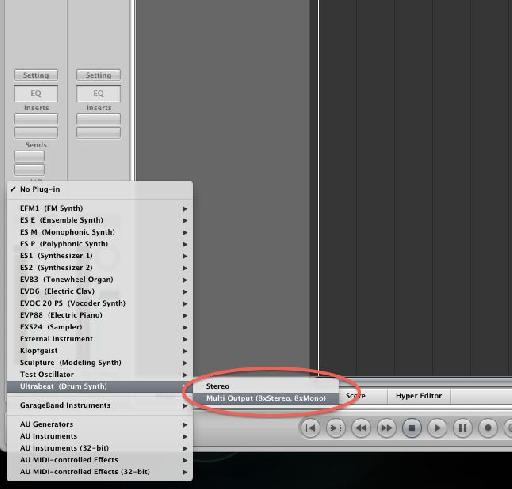 Let's set up Ultrabeat first, then save it as a preset/setting so it can easily be recalled in other projects. First let's clear the pattern in the Step Sequencer. From the pattern select drop-down menu, right-click and select "clear." 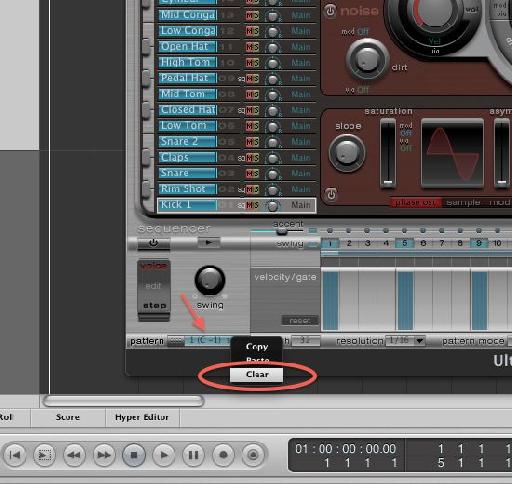 Right-click or control-click the bottom drum lane and from the Init menu, select Sample. We won't actually be using samples, but the Init Sample type voice has the envelopes already set to the way we need them. 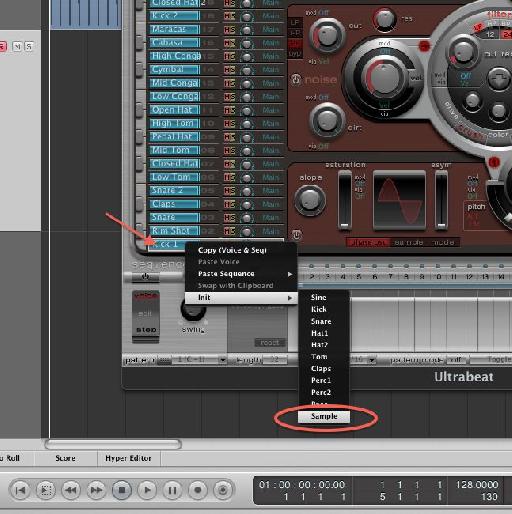 Now, turn off OSC2 with it's power button, turn on OSC1, then switch it to side chain. 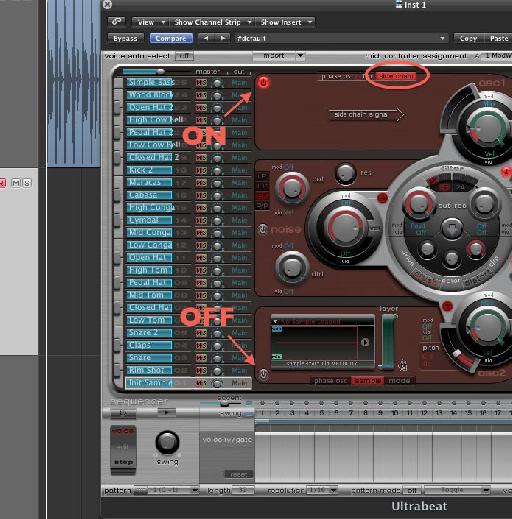 Go back to the first drum lane now, double-click where it says the name of the sound, and change it to "effect." We'll be naming these specifically later, but for now this will work. 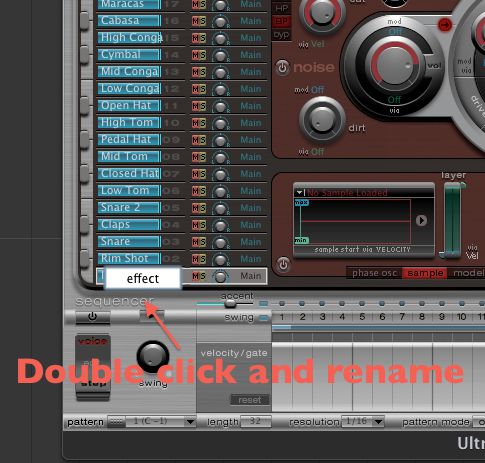 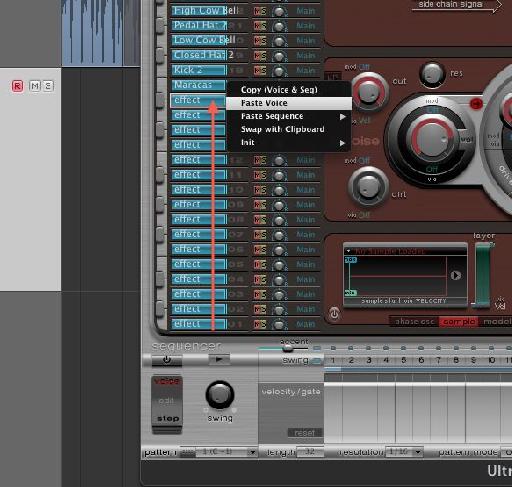 To keep things clear, rename the voice/lanes above 16 to OFF, and lower their volumes all the way down by clicking and moving to the left in the blue volume area QUICKLY. If you do it too slowly, Ultrabeat thinks you're trying to move the track. If you use the same method from the step before this one, you'll only have to rename and lower the volume on one voice/lane. Ultrabeat should look like this when you're done... 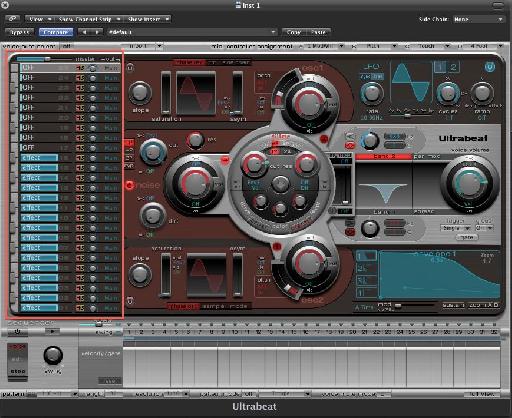 Now from the Out menu, let's choose separate outs for each voice. We'll leave the bottom lane on "Main," but choose the next higher number for the remaining 15 voices above it. It should look like this... 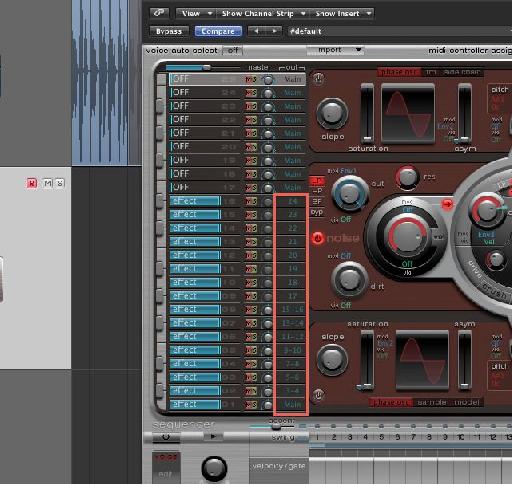 Step 9 - Save the setting

Now save the setting by clicking the menu here. Name it something like "Effect Sequencer." These first 9 steps only have to be done once! You'll be able to use this now in your other projects without a lengthy setup. 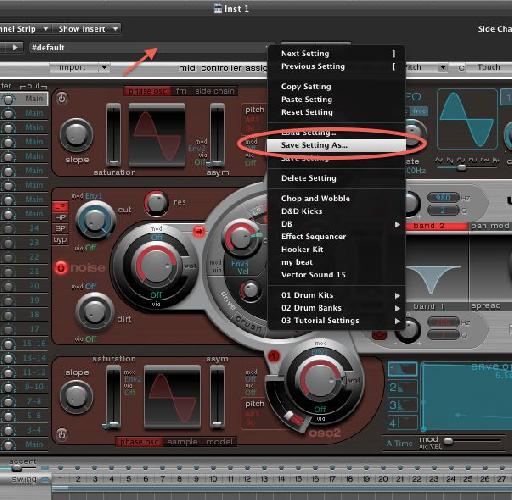 Let's get the track we want to effect through Ultrabeat now. I'm gonna send a really simple beat so it's easy to hear how it's being effected. I'm using Pop Go Beat 01. Since this is an audio loop (not a software instrument, all I need to do to get it into Ultrabeat, is choose it from the Side Chain menu. If you're using a track from an existing song (and you've named your tracks properly ...simply select it from the list. If the track you'd like to process is a software instrument, you will first have to output it to a bus, then choose that same bus from the Side Chain menu instead of an audio track. Now let's set up the multiple outs in the mixer. Hit the X key to open the mixer, and from the bottom of the Ultrabeat track, press the tiny plus button 15 times. This will create the auxiliary tracks we'll be putting different effects on. Look right below the I/O label on the tracks you just created. The inputs for each of the tracks were automatically set to the Outputs from Ultrabeat. They correspond directly to the outs we set up in step 8.

Time to add the effects to each of the Aux tracks we just added. I'm gonna place a reverb on the track the Ultrabeat is actually on, then a Tape Delay on the Aux 1 track, then an AutoFilter, a Bit Crusher, a Tremolo and more. Change out the settings on the different effects too. To keep it simple for this lesson, I'm not gonna fill all 16 Aux tracks with effects. I'll keep it at 7 effects. That's more than enough to really mess with this drum loop. 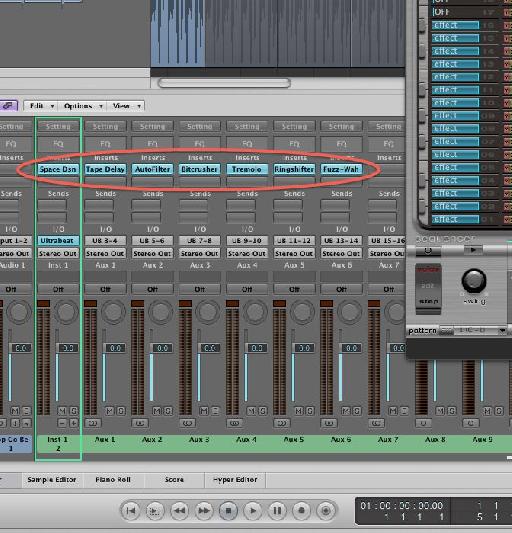 Now comes the fun part! Put a cycle around the sound your effecting (the one being sent through Ultrabeat via Side Chain), and hit the space bar to start playback in Logic. Open the Ultrabeat interface if it isn't already, then click on the Full View button on the bottom right corner. Turn on the sequencer and start to draw triggers into any of the 32 steps. Remember that each Ultrabeat voice/lane is a different effect, so make sure you're placing triggers into each of them. 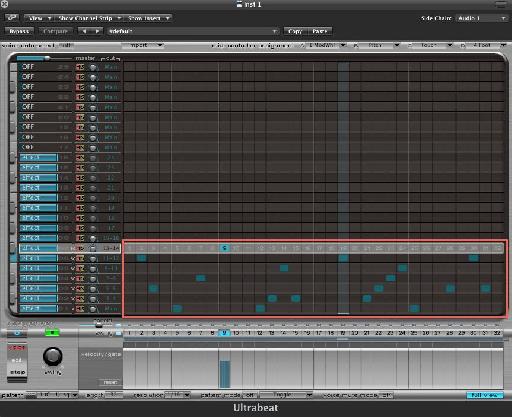 Here's a before and after sample:

The steps you're entering can have length too! That's why it was important we started with the Sample Init voice. In the velocity/gate area at the bottom, you can sustain your individual trigger lengths by click - hold - dragging any of the blue velocities. 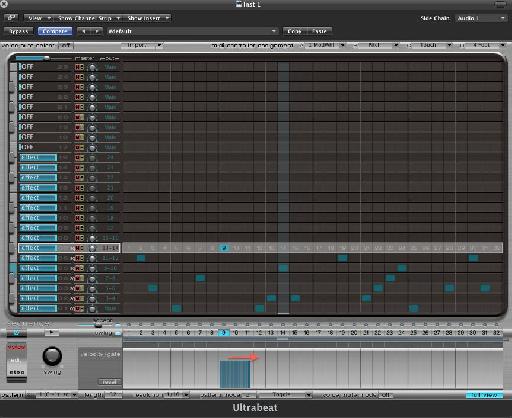 Let's turn off the source track now. This way, you'll only hear it when fed through Ultrabeat's step sequencer. Simply change the output on the track from Stereo Out, to No Output. This can be amazingly fun. Try this on a vocal or synth pad to for effected gated stutters. If you choose to do this, bypass one of the effects on the Aux tracks so you'll have the option to step in an un-effected version too.

Here's what that same beat sounds like with it's output turned off:

Name the tracks in both the Mixer, and on each of the lanes/voices in Ultrabeat. This way it'll be easier to know what effect you're stepping in.

When you've created a cool pattern, drag it to the arrange window, You can "arrange" the effects for the entire sound your processing this way. Work on the pattern in Ultrabeat for the particular section of the song, drag to the arrange window, then move to a different area, and repeat. After you've laid out the effects for the entire length of the sound, remember to turn off Ultrabeat's step sequencer, or the pattern you left Ultrabeat on will be playing back along with your arrange window sequenced patterns.

Darren Burgos
Darren started making music on computers when he was a teenager in 1987. His first computer was an Amiga, and when he realized the power of computer-based production, his addiction for making electronic music began. Darren switched to Mac in 1994 and started using Logic Pro. He's been involved in many music projects over the years including Psychoid. For two years Darren travelled with Apple showing Logic Pro to visitors of Macworld, NAMM, Remix Hotel and NAB. Currently, he teaches a class in L.A. on electronic music production using Logic for Logic Pro Help. Darren also runs two small businesses on Mixing, Mastering and Logic Pro training and support.
Related Videos
Comments (10)