All Articles Logic Pro
Logic Tutorial: Discover How to Use Send Returns in Logic 9
Rounik Sethi on Sat, February 12th 5 comments
Language
Working with effects in Logic is easy! Slap on an insert effect on the track and it's audio signal passes through that effect and gets processed. Well, there's another way which can give you more refi

Working with effects in Logic is easy! Slap on an insert effect on the track and it's audio signal passes through that effect and gets processed. Well, there's another way which can give you more refined control over your mixes. This second method sends an amount of the track's audio signal to an Auxiliary Channel where it can be processed by an effect.

In this tutorial we'll explore Logic's Send (also known as Buss Send, Send Return and Aux Send) techniques and the different send modes available and how they will affect your mix.

Using Sends can be a great way to control the amount of the audio signal from your track you'd like to be processed. So where an Insert effect typically applies 100% of the effect to the signal, you might choose to send a lesser or greater amount to a Send effect.

It can also be an efficient way to apply the same effect (e.g. reverb) to multiple tracks (e.g. 8 tracks of drums). Additionally it makes it simple to bypass, fade in and fade out an effect over time using automation - which can give superior results than simply automating the bypass button on the original track.

I've created one audio track and placed an Apple Loop: Euro Talking Synth on it for this example.

To set up a send from the track to an Aux channel, simply click on an empty Sends slot (under the Inserts area of the Channel Strip in the Inspector or Mixer) and choose Bus > Bus 1. (You can choose any Bus number) 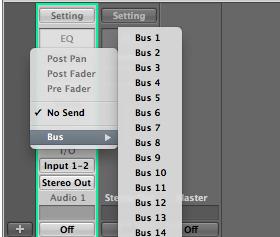 Note: A Bus in Logic 8 and above is a virtual cable used to route the audio signal to an Aux Channel.

A few things have changed. Open the Mixer and let's take a closer look.

Firstly, the top Send slot is colored blue and contains the name of the Bus that the audio signal is being routed through. The round Send knob next to it can be adjusted to determine how much of the signal will be passed through the Bus to the Aux. 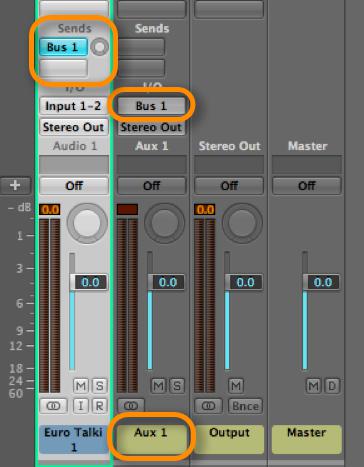 Secondly, a new Auxiliary Channel Strip has been created. In the I/O section of the Aux Channel you can see it's input is Bus 1 - the same Bus we set as the output from our Synth channel's Send slot.

Just like any Audio or Software Instrument channel strip, the Aux Channel Strip has Insert slots where you can place your chosen effects. For this example I've inserted a Space Designer using the setting:
02 Medium Spaces > 02 Halls > 2.0s Space Reverb 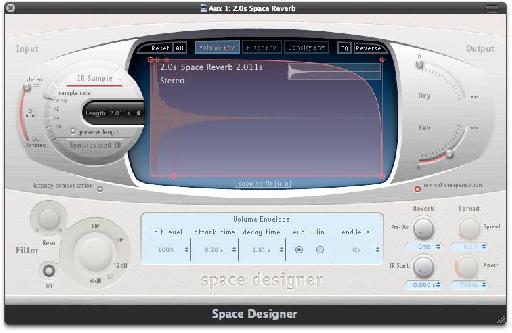 You can add more effects to taste. Remember that you can Set up sends on other channels that will send their audio signal to this Aux 1 channel, and thus to this reverb effect.

Note: It's common practice to insert certain types of Effects on Aux Channels and send signals to these tracks to be processed. Delay & reverb effects are often utilized in this way, but you can also experiment with modulation effects like chorus, phasers, flangers and even with compressors and EQ.

Here's an audio example where I have gradually increased the amount of the signal being sent to the Aux Channel using track automation.

You can also use the Aux Channel's volume fader to control how much of the processed send (reverb in this example) is then passed on to the output.

Logic has very flexible routing options! You can decide at what point, in it's journey through the channel strip, the audio signal is sent to the Aux Channel. There are three modes, so let's explore these in turn and listen to them in action.

The default mode is Post Fader. (Send slot is blue). The signal being sent is in direct relationship with the channel's volume level. If you drag the volume level fader down then, as the audio example below demonstrates, you're in fact sending less of the entire audio signal to the Aux Channel.

Notice also that if you adjust the pan / balance pot whilst in Post Fader mode, the original synth track is panned but the signal being sent to the reverb remains in the center (the same as the audio signal before it reaches the Fader and Pan). The audio sample below demonstrates this in action:

In the following example, the Send is set to Pre Fader and the volume of the Synth track is reduced gradually over time leaving only the reverb processed signal.

There's plenty of ways to get creative with Send returns in Logic. Remember that placing effects on Aux channels can make your project more CPU friendly, which is very important when arranging or mixing a large project. Instead of inserting 8 Space Designer Reverb plugins on 8 separate channels as inserts, you only need insert one Space Delay reverb plugin on one Aux Channel Strip and create sends from the 8 channels to that Aux Channel containing the reverb.

We'd love to hear from you, so please drop a comment below with your hints, tips and questions... Return to Sender style!!