Mixing two or more songs together in creative ways can transform the original pieces into something new and unexpectedly cool. Today this method is called a 'mashup.' In this two-part article, I'll be showing you how to create them in Logic Pro X. Part 1 focuses on choosing/preparing songs, and dealing with the many technical considerations. In part 2, we'll actually do the mashup where I'll be showing many tips and tricks on making it sound great. Let's get started!

First let's import the files we'll be using in Logic. When picking songs, keep this important tip in mind. If the song(s) you're choosing are current, or ones recorded within the last 30 years, they were probably either aligned to a musical grid in an application like Logic Pro, they used a drum machine, or were played/recorded to a 'click track'. These songs will accurately stay in time through the length of the song (once you've match the tempo), and are good choices for a mashup in Logic.  Older songs, or live recordings have inconsistent'"some might think more musical'"tempos since the musicians/drummer were/are the time keepers. If you must use older tracks'"or new ones where the drummer refuses to play to a click'"you can use Logic's Flex Time to manually shift the song into a single BPM by adjusting bar by bar. Be warned'¦ this is a long and sometimes hair pulling experience, and is beyond the scope of this article.

Other important considerations are the song's keys you'll be using. If you're musically trained, you can easily determine each song's key and will have a good understanding of which songs compliment each other. Some of you might have an 'ear' for keys, and some might not be able to determine a song's key at all. If the later is you, don't worry '¦ there are several options. What you need is key detection software. On your iPhone, a great App called Key Detect by MixVibes works extremely well. On your Mac, try Mixed in Key by the company of the same name. 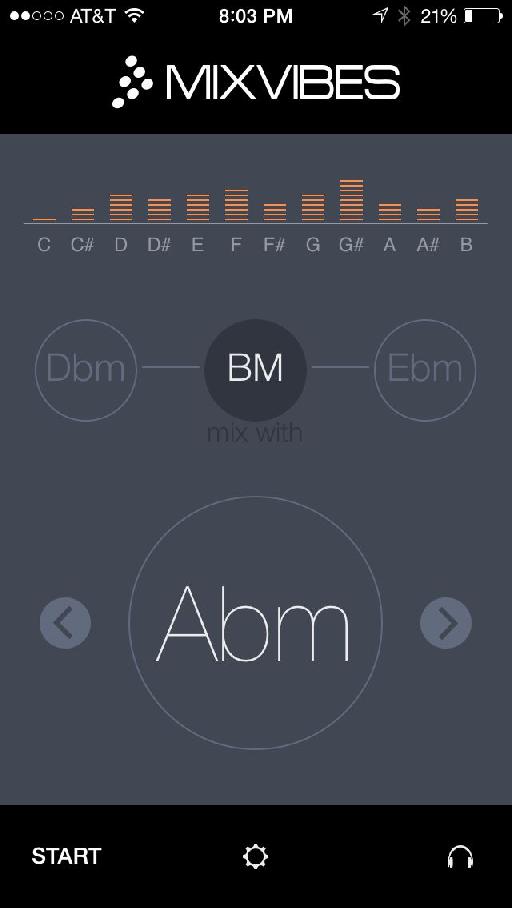 Press the F key to open the File Browsers window. I'll be pulling in two songs out of iTunes, so I'll click onto the Media tab at the top. If you're importing from another location, press the 'All Files' tab. Once you've found the files you'll be be using, simply drag onto an empty area of Logic's track list and new tracks will be created automatically for them. Make sure each song is placed at exactly the start of a bar. 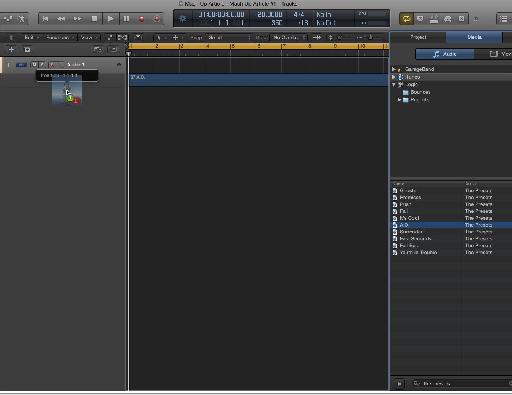 Add the BPM Counter plug-in from the metering category for each track you dragged in. Solo each track and play an area where the drums are playing full on. After a few moments (could take longer) BPM counter should be able to detect the songs tempo. Keep in mind that depending on the songs tempo and arrangement, it might be detected as 'half-time' or 'double-time.' If this happens, simply do the math and X by 2 or divide by 2. 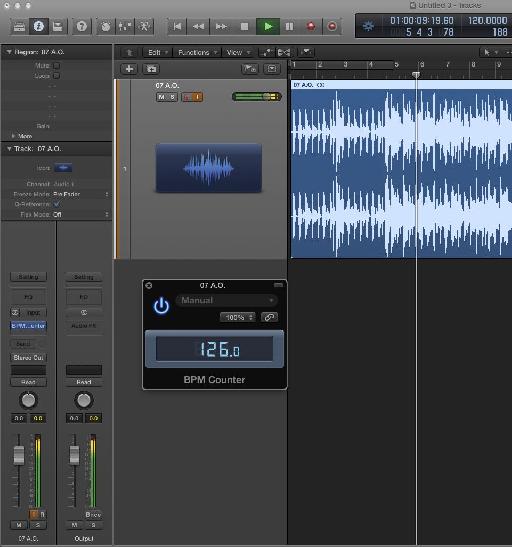 Once you've figured out each track's BPM, you should decide on a single tempo. For the two songs I'm using, I chose to speed up the slower song, but this is totally up to you. You can use Apple's own Flex Mode (with quantization) to align a song in much the way you would in Ableton Live, but the degradation over an entire mix like this may have you reconsidering. Especially (as in my case) if the songs you've chosen are somewhat far apart in BPM. Click to highlight the song you'll be adjusting, then press the W key on your Mac's keyboard to open the File editor. From the Functions menu, select 'Time and Pitch Machine.' Under the 'Original' column change the tempo parameter to the song's detected tempo, then in the 'Destination' column change the value to the new tempo you've decided on. Press the Process and Paste button (this can take several minutes) and close the window. If you've chosen to adjust the tempo on both songs, then do this step on the other song too. In this same window you can change the pitch of each song under the 'Pitch section.' Careful with this'¦ things will start to sound very unnatural if you go too far. Keep in mind that 100 cent equals a single half step on a musical keyboard. 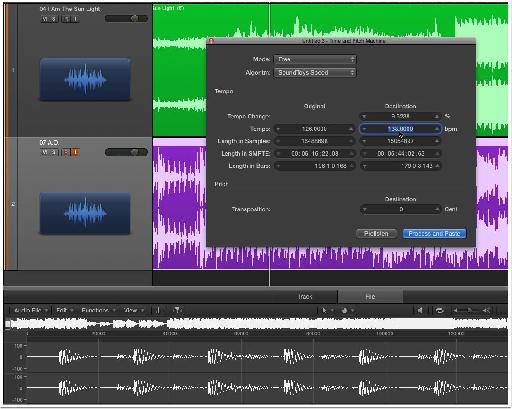 Not happy about the quality of Logic's built-in time stretch/compression? If you own the excellent Native Effects bundle from Sound Toys (and you've updated it to the latest version) you get the insanely great 'SPEED' add-in that works as a Logic Pro X Time Stretching Algorithm. Use it instead, as I did! It's visible in the last screen shot. When it's installed, you simply select it from Time and Pitch's 'Algoritm'[sic] menu '¦Ignore Apple's misspelling LOL (As of version 10.0.7)!

Now that you've picked your songs, determined their original tempos, and changed them if necessary, simply set Logic's tempo to match! 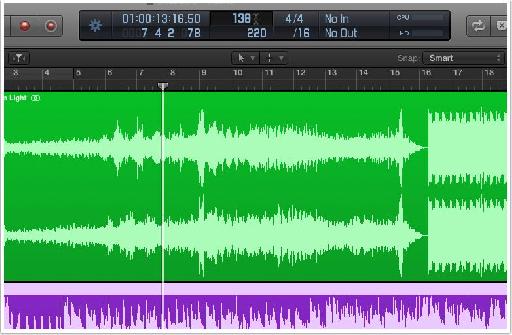 Today's EDM music is mostly crafted in a DAW like Logic Pro X (much of it actually is crafted in Logic). Because of this, most music is produced and recorded to a single BPM that is chosen in the DAW. Because a computer is controlling the tempo, it never fluctuates and is extremely accurate. If the song was 'bounced' from the DAW at the start of a musical bar, life is great and everything should line up perfectly in Logic after you match the tempo. Press the K key on your Mac's keyboard to start the metronome. Lower the volume on the song you're aligning if necessary so you can hear the metronome more easily. Listen carefully to make sure the metronome is perfectly in sync with each of your songs. If it is, you're good to go. If not you'll need to slide each track around horizontally so a downbeat aligns perfectly to the start of a bar in Logic. 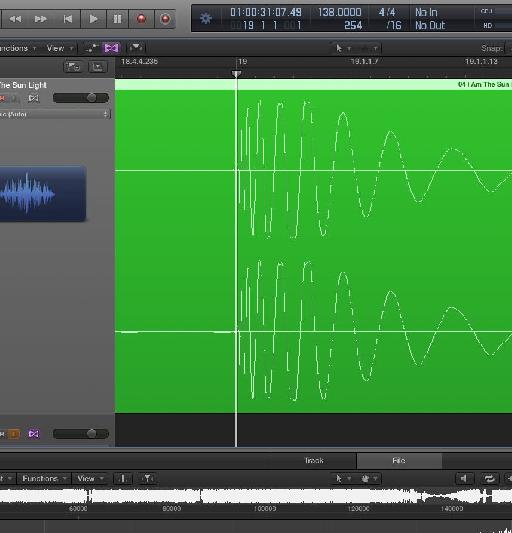 To fix tracks that are not aligned to the musical grid, jump to an area of the song where you can clearly see the first downbeat in the waveform. Visually line-up the waveform to match the start of a bar in Logic. Zoom in as much as possible using Command-Arrow Keys to get this as near to perfect as possible. Press the K button to enable Logic's metronome and play'¦ when it's spot on, you'll notice that the metronome seems to phase a bit. After you've aligned all tracks perfectly, never move a section without cutting a perfectly snapped sections from it. The beginning will probably not be aligned to a bar'¦ this is to be expected.

Now that all the technical stuff is out of the way, you're now ready to start mashing! Read on to part two'¦ this is where the fun begins.