Often, in a session, the artists and producer spend a lot of time settling on just the right sampled instrument for a particular part in a particular track, but when the player sits down to perform, it's just not happening. The sound of the samples is great, but the instrument doesn't respond 'musically' to the player's touch'"the resulting performances are stiff-sounding, and the instrument sounds fake in context.

One of the classic examples of this is acoustic drum samples. If a particular drum kit is lacking in nuance, there are a number of tweaks that could be made to enhance the realism of the simulation and make it sound more like a real drummer pounding away. I'll go through a few for Logic and EXS, but, in fact, these tips are applicable to a lot of different samplers, and different instruments, besides drums. 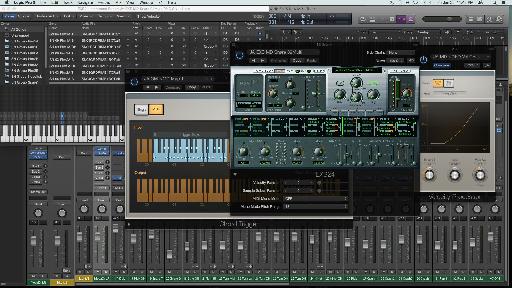 Fig 1 Some of the tools in Logic X for tweaking sampled drums / instruments for better playability, expression, and realism.

Among the most obvious flaws that people complain about, when using some sampled drums, are:

A Map for (Drumming) Success

Some of these issues can be addressed by making relatively simple tweaks to the drum kit itself. Once of the most basic fixes involves re-mapping the drums across the keyboard. A lot of drum-playing techniques involve fast, repetitive notes'"well, just try to play like that from one key on the keyboard! Unfortunately, many drum instruments follow the GM (General MIDI) standard drum map, which assigns a lot of drums to only one key. Most of the fancy third-party drum instruments have devised their own custom maps, more amenable to playing the kit in real time, and you can do that too. In Logic, you don't even have to go in and re-arrange sample keyzones, a tedious and labor-intensive task'"you can make use of the Chord Memorizer MIDI plug-in. Despite its name, this is a great MIDI note re-mapping tool'"you just take the notes you'd prefer your drums to play from, and set them to trigger 1-note 'chords''"the original note assignments in the instrument. 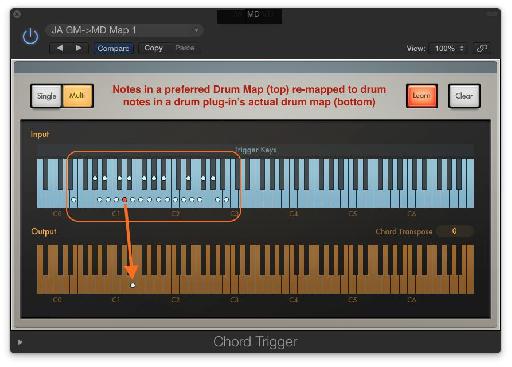 You can design your own custom drum map'"mine lays out the drums like they'd be if I were sitting in front of a real drum kit. I figure that not only makes it easier to perform natural drummer-like riffs and fills, but also pushes me toward the kind of things a real drummer would play. I'd recommend at least two keys per drum/cymbal, on adjacent black or white keys, and maybe three or four for snare, which will let you perform natural-sounding drags, ruffs, and rolls. But everyone has their own preferences'"whatever works for you will certainly be better then the GM standard! Once you've made Drum Maps for each of the drum instruments you own/use, then you can just insert the appropriate one into any drum instrument Channel Strip, and be good to go.

Often, when you play a drum figure, the drums don't respond with enough natural variation in tone, sounding less than real, even if only subliminally. Many drum instruments rely on several sample layers per drum note'"samples of the same drum played hard, medium, soft'"which trigger at the appropriate velocities. Two things can go wrong with this.

If there aren't enough layered samples, then, as you play a riff that gradually builds in volume and intensity, you may suddenly hear the tone change abruptly when your MIDI velocities cross a transition point between samples, rather than hearing a smooth, gradual build up in level, tone and brightness, like the real thing. The other problem is that many unweighted keyboards make it almost impossible to play'"at least to play expressively'"at lower velocities, missing the softer samples, and making every performance sound like you're bashing away at the drums at full volume all the time (this is a problem with lots of dynamic virtual instruments).

The solution to the latter problem is, again, a MIDI plug-in'"this time the Velocity Processor. Here, you can scale the Velocity response of incoming MIDI notes, restoring a more even playing response. For the example I just gave, a Velocity curve like the one in Fig 3 would give the player more control when he's trying to play quieter parts, while still preserving the same response to minimum and maximum levels. 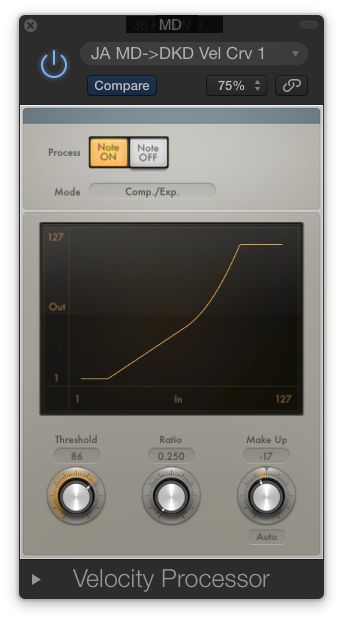 The first problem is a little trickier. Sometimes (often) there just aren't enough velocity layers for a natural response, and sometimes there are no velocity layers at all, just one sample, of a loud, hard hit, per key. Well, it's still possible to make even a single sample of a drum or cymbal respond with realistic dynamic variations, but you'll have to get into the sampler and tweak some settings. The tweaks I'll describe assume you have one sample of a drum, and that sample is of a hard hit.

Velocity to the Rescue

Your single drum sample should sound fine when you intend to play a loud note, like on a simple backbeat, for example. But when you try to play dynamically'"a build up, or a riff with accents'"then the drum sounds stiff and unnatural. The volume may change, but the tone doesn't, so instead of sounding like someone playing a drum with finesse, it sounds like someone bashing away crudely, while an engineer rides the volume fader up and down. The solution is to assign MIDI Velocity to control two or three things in the samples'"volume, lowpass Filter Cutoff, when applicable, and Attack Time (and, again, this works for any percussive instrument, like piano, bass, guitar, etc.). I'll describe how to do this in EXS, but it would be the same in any sampler. 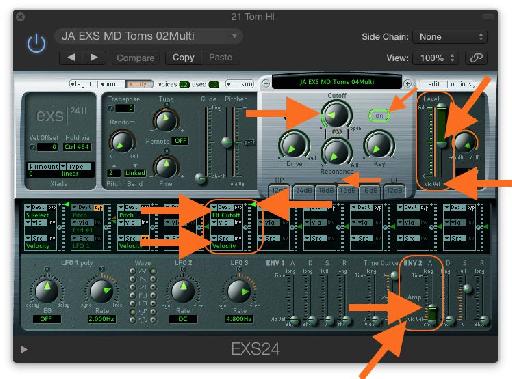 Velocity-to-Volume, obviously, makes the drum get louder when you play harder (higher velocities). In EXS, it's done with the split slider in the Amp section'"the top part is set to maximum, and the bottom part sets how quiet the quietest notes should be. You'd set this by ear, while playing, and you may want to tweak it again'"possibly reduce the range'"after making the other settings.

Next, set Velocity to control Attack Time. This is also done, in EXS, with a split slider, this time down below'"Envelope 2 Attack. The bottom part is set to minimum'"the fastest Attack, which will correspond to the highest velocities you play. This will let the entirety of the sharp transient at the beginning of the recorded sample be heard, making the drum sound like a hard hit (as it was recorded). The top half is set to a higher position, meaning a slower attack'"this will reduce the level of the beginning of the transient, so you only hear the quieter, tail end of the transient, which will make your recording of a loud drum hit sound like a recording of a soft drum hit. Just as with Velocity->Volume, EXS will scale the Attack Time in-between these two extremes, so as you play softer notes, the Attack gets progressively weaker, and as you play harder notes, the transient comes through, and the notes sound stronger and more aggressive, as they should. The exact value for the upper part of the slider is set by ear'"too slow an attack will turn the drum to mush on soft notes. Typically, 10'"20 milliseconds would be a good place to start. Exceptions here might include snare drum'"to facilitate the playing of realtime rolls, I sometimes set it to around 100 milliseconds or more (Audio Example 1). (Note: there is an alternative method, Velocity-to-Sample Start point, but in EXS, I think it works better with Attack Time.)

The third setting is Velocity to lowpass Filter Cutoff. I wouldn't use this on Snare drum (where the snares keep the drum bright even on soft hits), but for drums like toms and kick, which do have a slightly duller tone when you play them softly, this will complete the illusion of natural tonal variation. In EXS, you'd have to set up a Mod Matrix routing of Velocity to Filter Cutoff, with full Intensity, then set the Filter Cutoff itself for the appropriate tone for the softest hits (just as with Velocity-to-Volume). With all three of these tweaks in place, even single-sample drums should respond to dynamic playing with smooth, gradual, realistic tonal variations in level, brightness, and attack. One caveat, specific to EXS: for the most natural response for each drum and cymbal, you might want to set up different EXS plug-ins, with different settings for the different drums, all part of a (Summing) Track Stack, for the best results.

Audio Example 1 Each of the drums in these examples have only one sample with one velocity layer:

B) The same Toms without any Velocity processing; then with;

C) The same Snare without any Velocity processing; then with

One final tweak. The infamous 'machine gun effect' has always been the bane of people looking for realistic-sounding acoustic sample instruments, especially drums. When a drummer plays, say, a backbeat, he never hits the drum exactly the same way twice. Very slight variations in pitch and tone add a little variety'"spice'"to the drum sound, subliminally letting the listener know it's a real kit being played. When a sampled drum kit triggers the exact same sample over and over (like a machine gun firing), it sounds far less real'"a dead giveaway of something fake.

The fix for this requires that you have multiple samples'"or at least two'"of the same drum, very similar, but slightly different in tone. You can set these to randomly alternate, again providing the needed tonal variety. To do it in EXS'"assuming two alternate samples, for this example'"you assign both to play from the same key. Then you set a Mod Matrix routing of Velocity to Sample Select (full intensity). In the pull-down area at the bottom of the EXS window, you turn Sample Select Random to maximum (Â±127). Finally, in the EXS Instrument Editor Zone view, you enable Vel.Range for each sample pair, and set one to 0'"63, and the other to 64'"127. Now, when you repeatedly play that key, the two different samples will alternate at random, for a greater sense of natural variation.

These tips may be a bit tweaky'"especially the last couple'"but once you've done them, you'll realize they're actually pretty easy and quick to implement. If you have certain sample sounds that you'd really like to use, but they just don't seem responsive enough, one, or all, of these adjustments might do the trick, and turn a fake, stiff-sounding patch, into a richer, more 'musical' virtual instrument.