All Articles Logic Pro
Making the Most Out of Logic Remote with Logic Pro 10.1
Darren Burgos on Mon, March 16th 1 comments
Language
Probably the best way to get the most out of using Logic Pro is with a control surface. And, if you have an iPad, Apple's free Logic Remote app is an extremely versatile surface and controller in one.

Have an iPad and Logic Pro X? You're in luck, Apple make a free companion iPad application called Logic Remote. It works as a control surface, wireless transport, MIDI controller, as a dynamic 'Smart Help' Logic manual, and even let's you adjust plug-in parameters on both Logic and third party plug-ins. In this article we'll take a look at all of those uses and more.

Logic Control is available as a free download from the App Store so if you haven't already downloaded it, now's the time. Both the Mac with Logic Pro X, and the iPad with Logic Remote must be on the same wireless network, or you can connect via Bluetooth for even lower latency. Whatever method you choose, simply open Logic Remote on the iPad and a list of Macs running Logic Pro will appear. Select the Mac you intend to use with Logic Remote, and a dialog box will appear on the Mac asking if you want to allow Logic Remote to connect to Logic.

Using Logic Remote as a 'wireless' Transport is probably the simplest of things it can do, but one of the most useful. The top strip in Logic Remote is called the Control Bar. It's always visible throughout Logic Remote's 5 views and also in Plug-in view. You can do things on this bar like record, play/stop, set the cycle, turn the metronome on/off, move the timeline, and more.

Record your own vocals, guitar, or other instruments? Touch the far left button on the Control Bar (the View menu), and select the Mixer view. When you select the track you'll be recording on, you can easily select Library Patches/channel strips right there on the iPad. Click the small drawer icon on Logic Remote's Control Bar (to the right of the View menu). All the same Library Patches appear as they do in Logic'¦ even your custom ones. If you're an Apogee owner, you can click the I/O button in the Mixer view to set the trim/recording level for the mic or instrument, and even see a live view of the track's meter. Try touching the top center LED area on the Control Bar (that displays the track name and position) and a miniature time-line/bar ruler will appear. You can move the time-line easily, zoom in and out with two fingers, and even position and set up your cycle range. 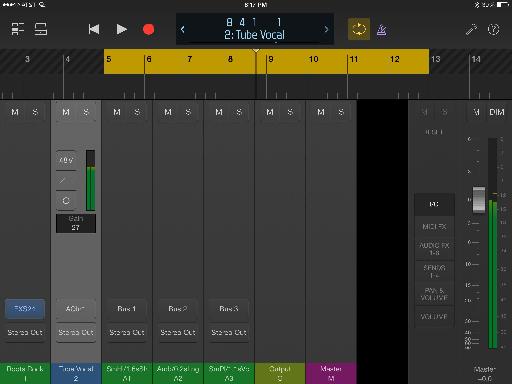 There's a lot to do here in the Mixer view. It's basically a control surface that allows you to adjust volume, panning, sends, muting, soloing and more in Logic. Just as it can in Logic directly, all the adjustments here can be recorded live as automation by putting the various tracks into Touch/Latch mode (which you can also do right there on the iPad). 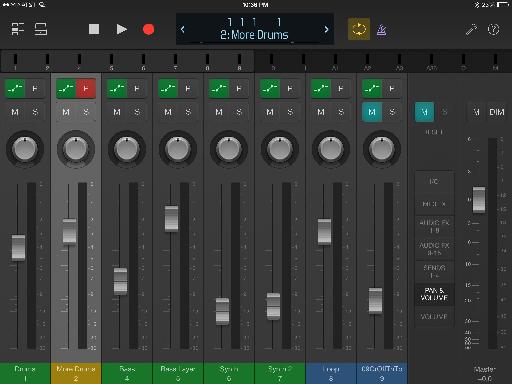 Need to adjust a plug-in parameter remotely on the iPad? Logic Remote's new plug-in view allows you to display/edit all plug-in parameters. Not only for Logic's built-in plug-ins, but also for your third-party ones too. While in the Mixer view, find the plug-in you want to adjust by going through the various track modes like I/O, MIDI FX, AUDIO FX, etc. When you find the plug-in you're looking for, touch it and a menu will appear with the option to 'Open Plug-in.' 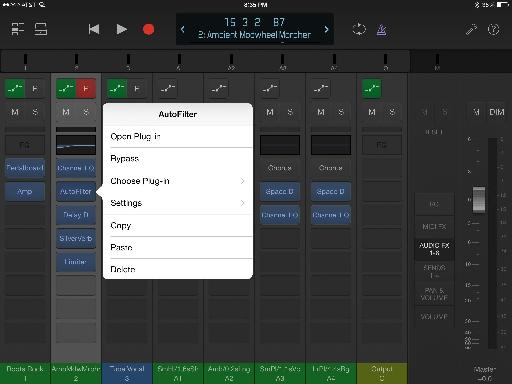 You'll get a screen displaying a generic list of all the Plug-ins parameters you can easily touch to adjust. It can be harder to find what you're looking for in plug-ins with several dozen or more parameters. However, one easy way to find a specific parameter, is to adjust it on the instrument in Logic, while watching the plug-in view on the iPad. You'll see the parameter move also on the iPad! If you don't see it move on the first page, swipe through the plug-ins various parameter pages until you find it. It would be great if the plug-in would switch to the correct page automatically when adjusting the parameter in Logic since there's often 10 or more pages. This seems possible, so hopefully in a future version. 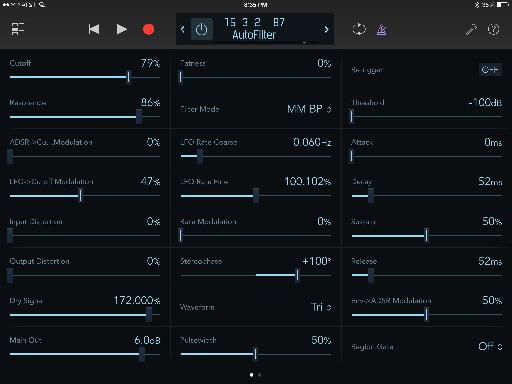 From the Control Bar, touch on the Smart Controls or the Smart Controls & Keyboard view. This displays and allows you to edit much of the same data as it would by pressing the B key in Logic Pro to bring up Smart Controls. You can leave this mode on all the time, and while you switch from your various instruments and audio tracks in Logic, the iPad will display Smart Controls for whatever you've clicked on. Below the Smart Controls is an instrument specific MIDI controller. If you're on a channel with an UltraBeat you get a MIDI drum pad, a synth, piano, or organ, and a MIDI keyboard appears, and if the channel has a stringed instrument like a guitar, you'll get a MIDI fretboard. You can also choose to specifically use any of the three. 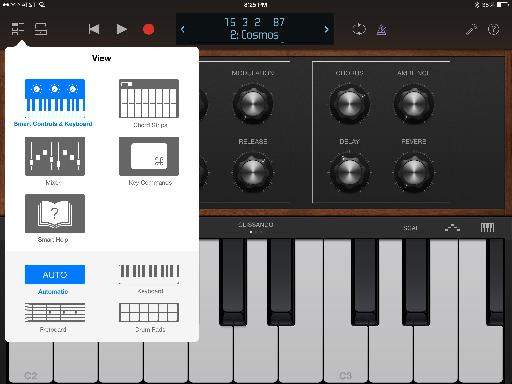 Select Chord Strips from Logic Remote's view menu. Chord Strips are great for capturing authentic sounding MIDI strums. Back in Logic, make sure you've selected a software instrument with a guitar or stringed instrument sound. Still in Logic, press the D key to open the List Editors, then click onto the Signature tab. Set the 'Key' event, to the key of your song, and the Chord Strip on the iPad will change to display chords based on the key you chose. 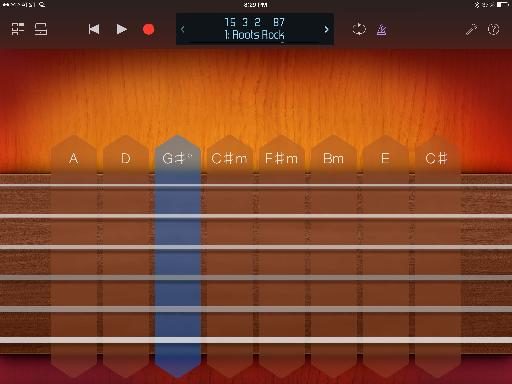 You can even edit specific chords on each of the strips. Touch the wrench icon on the Control Bar while in the Chord Strips view. Swipe up to display the Edit Chords button. You can click on any of the strips to change them to your chord of choice. This can be very helpful while song writing and producing. 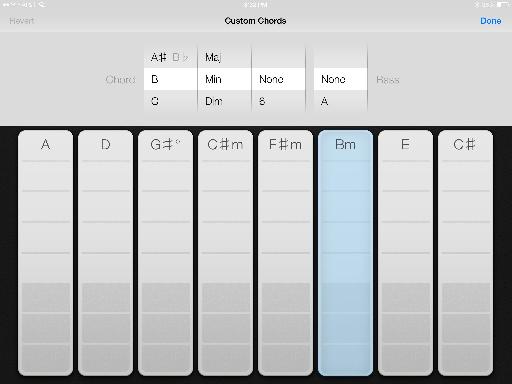 Dynamic Logic Help at a Glance

Yep. Touch the Views menu and select the Smart Help view. Start pointing to anything in Logic. The Smart Help manual on the iPad will actually display, and give live context-sensitive help about whatever you point to in Logic! This is actually super cool to see it update on the fly. Currently it doesn't seem to show information for Logic's various plug-ins when you point to them.

Create custom Key Command pages for yourself. This is absolutely great for beginning Logic users. After selecting the Key Commands view, swipe to the left a few times till you get an empty page. By clicking on any of the 24 cells, you can add your own favorite key commands! A list will appear where you can select a command from various categories, or search for its name with the search field at top. You can even color code them as I did in the image below. 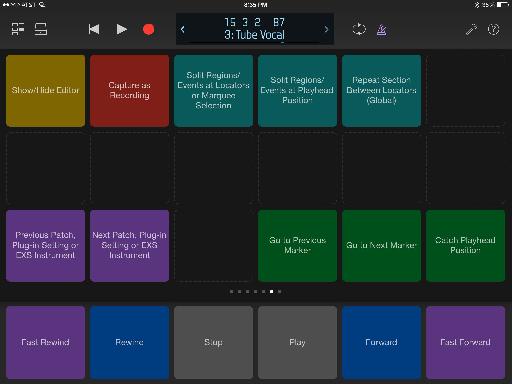 Learn more about Logic Remote in this video course: