All Articles Logic Pro
Mix Tricks: Self-Ducking Reverb in Logic Pro and Pro Tools
Mike Watkinson on Tue, July 5th 1 comments
Language
A nice long reverb can be very effective on, say, a vocal to create the feeling of space, effective when there is time between phrases for it to be clearly audible.

A nice long reverb can be very effective on, say, a vocal to create the feeling of space, effective when there is time between phrases for it to be clearly audible. The same effect will have a negative impact in the middle of the phrase, drowning out subtleties and nuances, and smearing consonants. What would work better is a reverb that is '˜ducked' in the presence of a signal, but blooms into life when that signal is absent.

In a DAW, a reverb is typically applied as a bus send, so in Logic Pro, begin by adding a stereo Auxiliary Channel Strip (click the + button at the left hand side of the mixer, connect an unused bus to its input, then send to that bus from the vocal channel (or from whichever track you are applying this effect to). This process is made easier if you name the Aux channel as this name will be listed when you choose the bus on the sending channel. Then instantiate a reverb plug-in such as Space Designer as an insert in the auxiliary channel, and choose an appropriate setting. 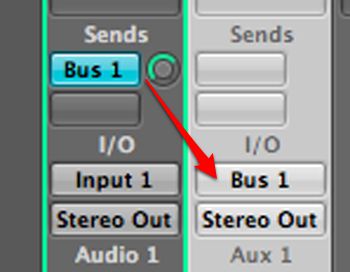 Ducking is achieved by adding a compressor after the reverb in the insert chain of the auxiliary channel. Using the Side Chain input selector menu, the vocal (or alternative track) should be chosen as the side chain input to the compressor. This means that the compressor will only be active, and therefore reducing the level of reverb, when a vocal signal is present. 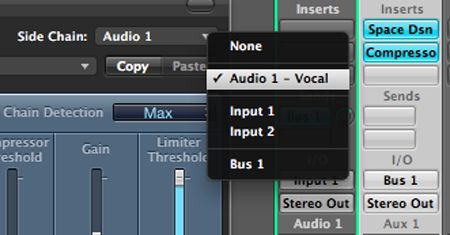 Setting the Side Chain input.

Settings in the compressor are obviously critical for effective ducking to take place. For example, you will need to have a fairly low threshold and high ratio in order to create audible gain reduction. The threshold is also one to keep an eye (and ear) on as it relates to the level of the side chain signal as opposed to the reverb itself. The release control in this case is also crucial in shaping the reverb sound. Since the compressor is ducking the reverb (that is, reducing its gain), the release of the compressor will effectively be controlling the attack time of the reverb,  as it reappears when the vocalist's volume fades. 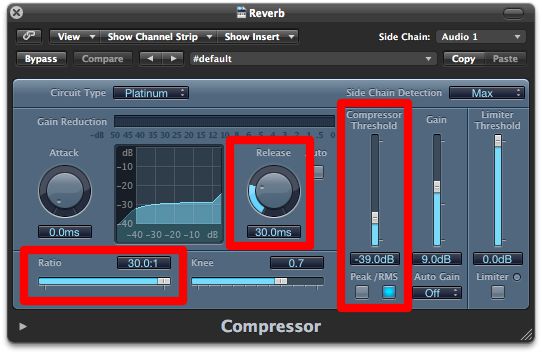 As you might expect the set up in ProTools is very similar. There are however a couple of '˜key' differences. The quickest way to create a bus send in Pro Tools 9 is to click on a send slot on the channel strip, then choose '˜New track'¦' In the '˜New Track' dialogue that appears create a stereo Aux Input (?) track (the default) and name it '˜Reverb' or similar. Instantiate a reverb followed by compressor as inserts in the Aux Input track.

The Key Input (side chain input) in ProTools plug-ins won't accept a channel output as an input, so you will need to connect another bus as a send from the main vocal channel specifically for this purpose. In this example I have used to Pro Tools IO Setup to label the designated bus to make it easier to find. 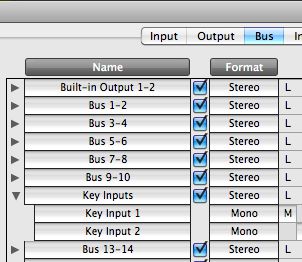 See and learn more Mix Trick from Pro Producers in these Video Tutorials below: