All Articles Logic Pro
Mixing: A Guide to Modulation
Richard Lainhart on Sat, July 5th 0 comments
Language
What is modulation? How can you make use of it in your musical compositions? The late and great Richard Lainhart wrote this piece for AskAudio Mag which explores modulation in Logic Pro.

Very broadly speaking, the word modulation means "change". More specifically, when used in the context of electronic music production, it means a change in the property of a sound like pitch, amplitude or timbre. Such a change is usually periodic or repetitious, although sometimes it can be random, and is usually controlled by an oscillator or other periodic sound source applied to the sound being modulated.

Logic offers a whole category of modulation effects which change the sound to which they're applied in interesting, useful, and sometimes radical ways. In this article, we'll discuss some of the concepts of modulation, take a look at a few of these modulation effects, and explain how they work.

Let's begin by looking at a standard modulation effect, Chorus. In Logic, create a new empty project, add a new software instrument, and accept the default EVP88, which is a good candidate for chorus'"it's a classic sound. Delete or bypass all the default Insert plug-ins and enable the Chorus effect, which you'll find in the Modulation submenu: 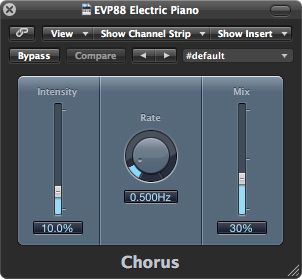 Loading the Slow Chorus preset and playing some EP chords gives you a pleasant, slightly warbling effect that seems to move between the speakers, in classic '80s pop ballad style:

What's happening here is common to most modulation plug-ins or effects: the straight EP sound is split coming into the effect. One side of the split stays unprocessed and is mixed with the processed version at the output of the effect. The other split then goes into a digital delay, set to a short delay and repeat. The rate of the delay is then modulated with a low-frequency oscillator (LFO), the speed of which is set with the Rate control. These types of modulations typically use LFO frequencies in a range from less than 1 Hz, or cycles per second, up to 20 Hz or more, but usually no higher into the audio range, as they would with FM synthesis, for example.

The LFO modulation of the delay frequency causes a slight periodic pitch shift of the modulated signal'"it's as if you were constantly and regularly varying the speed of a vinyl record's playback above and below its original pitch. By itself, that constant pitch shift might sound unpleasantly "warbly" or out of tune, but when a small amount of it is mixed in with the original signal, it adds a sense of thickness, motion and activity that livens up the otherwise rather dead EP sound. And because the delay is a stereo delay, and the two channels are slightly out of phase with each other, you get a sense of stereo motion between the channels as the channels shift in and out of tune with each other.

That's really the basics of how these modulation effects work'"the modulated signal, whose pitch or amplitude or timbre are constantly being modulated by the LFO, is mixed with the original to create the new sound.

Of course, it's possible to get extreme changes with even simple modulation effects. Here's what happens when we crank the Intensity (the amount of modulation) and the Mix (the proportion of modulated to unmodulated signal) all the way up, and turn the Rate up to 8 Hz or so, using part of the same track as before:

The pitch modulation is so severe that much of the original sense of pitch in the track is lost. These kinds of effects can be a creative tool as well, and are ripe for experimentation.

Of course, you can modulate other aspects of the sound than just pitch. Try loading the Tremolo effect, which modulates the amplitude rather than the pitch of the input: 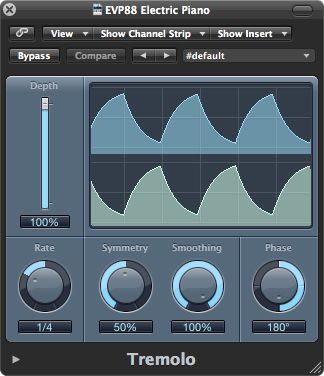 This particular Tremolo setting pans the signal back and forth between the speakers, recreating the classic Fender Rhodes stereo tremolo:

One nice feature of the Tremolo effect is that the modulation rate can be synced to Logic's tempo, and can be set to different rhythmic subdivisions of the basic beat. For example, here we have a synth bass with Tremolo; we've set the Rate to quarter-note triplets and added a click so you can hear the rhythmic effect of the triplets against the pulse:

Logic's Modulation effects include many variations on these basic concepts'"Ensemble, which combines up to 8 standard chorus modules with two LFOs and a random LFO for deeper, richer chorus effects. The Flanger, Phaser, and Microphaser all use very short delay times and modulation rates to create shifts in timbre and harmonic structure rather than the pitch shifts found to the Chorus effects. Phasing and flanging are also classic effects you've heard many times, which sound somewhat like the "whooshing" of wind embedded in the sound.

But all these modulation effects are essentially variations on the same concept'"LFOs periodically changing the pitch and amplitude of a track and being mixed with the original track to create the final effect. Once you understand those basic principles, applying and customizing modulation effects becomes simply another tool in the creative musician's arsenal.