All Articles Logic Pro
Mixing Electric Guitars in Logic-Part 1: EQ
Mike Watkinson on Mon, May 23rd 0 comments
Language
If the aims of mixing a band could be summed up in a few words, they might be clarity, balance and blend. But mixing with these aims in mind can be a frustrating experience. One instrument in...

If the aims of mixing a band could be summed up in a few words, they might be clarity, balance and blend. But mixing with these aims in mind can be a frustrating experience. One instrument in particular can cause all sorts of issues, especially where the first of these aims is concerned.

Electric guitars typically have a lot of energy in the low-mid part of the frequency spectrum. Guitarists in search of '˜tone' often dial in mid boost, and amp makers support their quest with promises of '˜warmth' and '˜body'. All of which makes for a mix that can sound congested with both vocals and bass lost in a soup of uncontrolled mud. Equalising the recorded guitar sound is therefore a fundamental part of clarifying a mix so that other parts can be clearly heard.

Logic Pro's Channel EQ is the ideal plug-in for this task in that it has two filters, two shelving and four peaking bands of EQ all of which are fully parametric, as well as an Analyzer to give you a visual clue to the frequency content of your sound, and the effect of the changes you make. 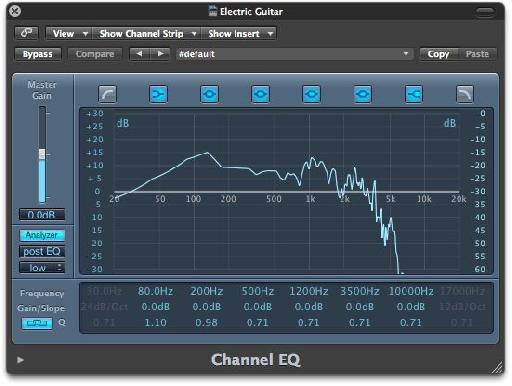 The frequency content of a typical electric guitar recording - lots of energy around 50-200 Hz, and almost nothing above 6 kHz!

First of all, consider the source. Is it supposed to have anything below 100 Hz in it? And those Celestion speakers in that Marshall cab? Specifically chosen because they have poor top end response, which warms up and smooths the output of the amp. Miked up with an Shure SM57, perhaps, maybe set at a 45Â° angle, are decisions that further smooth the sound. In fact the frequency response of a Marshall 4X12 cab starts to roll off at about 6 kHz and is around -50 dB down at 10 kHz with almost nothing above that.

So as a starter, '˜bracketing' the low and high end with filters is completely appropriate. This will also remove any '˜rogue' sounds such as mains hum and hiss, picked up or created by the microphone and recording signal path. 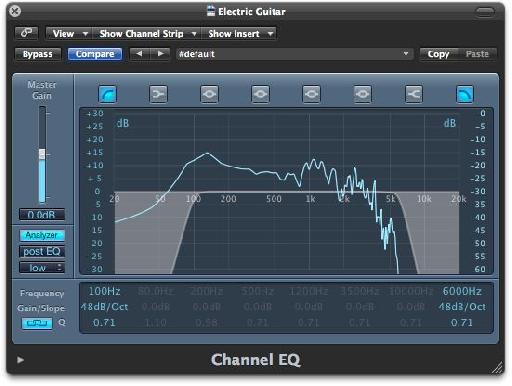 '˜Bracketing' to filter the very bottom end and everything above 6kHz - this has very little effect on the sound, but guards against hum and hiss

Pulling down the low-mid range or removing it completely would be the next step. As a guitarist, this is the part that hurts me the most! All that time (and money) spent creating a fantastic low-mid '˜chunk', only to have it removed? Complete removal is however at the discretion of the mix engineer and should be dependent on the style of music. Obviously rock and especially metal demand guitars with some low-end action, and often, therefore, the bass is pitched or played suitably lower so it can sit underneath. The kick drum meanwhile may have a large amount of '˜click' so it can sit on top.

In most other styles of music, a guitar sound that has almost no low-mid range at all, often works much better in the mix (despite sounding slightly '˜disappointing' when solo'd). Principally because, in order to be heard, it doesn't need to be as loud, leaving space for those parts which naturally occupy the low-mid part of the frequency spectrum.

So if you used to filter the low end, continue here by adding a shelving EQ, so you can decide whether to have some or none of the low-mid and where the cut off should be. 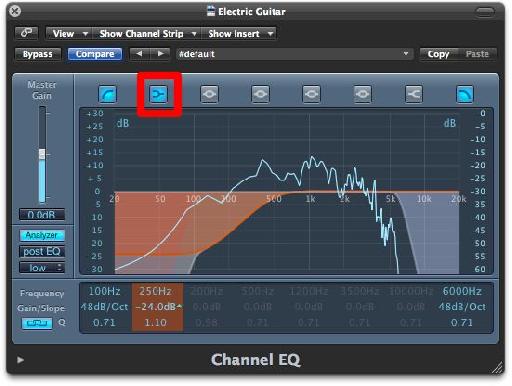 Using a shelving EQ to pull out low-mid

Another '˜feature' of most recordings, and this is not limited to guitars, is that there will be specific frequencies that are way too loud due to resonance, perhaps caused by the room, the cabinet, or a combination of the two. They aren't immediately obvious as the frequency band they occupy is typically very narrow, so they need to be hunted down using the following technique: 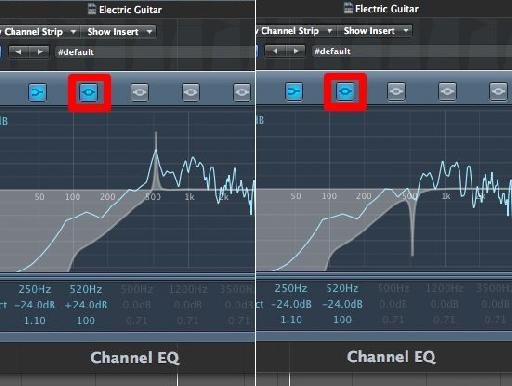 Resonance found at 520 Hz, and on the right, removed!

So far we have only talked about removing frequencies. But boosting a relatively wide range of frequencies anywhere between 500 Hz and 4 kHz by up to around 3 dB can alter the character of the recorded guitar sound. This is particularly useful for double-tracked parts, where you are trying to create an aural difference between the takes. 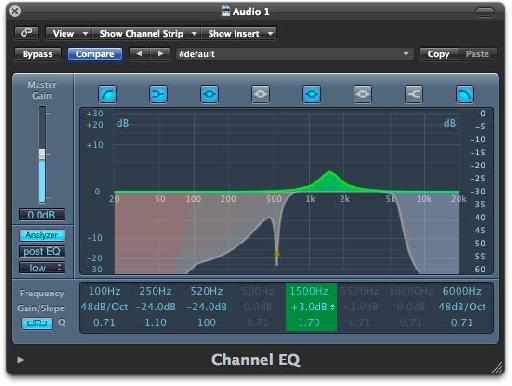 A little character added at 1500 Hz; the dB scale has been stretched by dragging the left hand scale, so that smaller changes are more visible

Adding around 0.5 to 1 dB from 4 kHz to 8 kHz Hz can also add '˜air' to the sound, enhancing the perception of '˜openness' or '˜clarity'. This can be especially effective on clean guitars with strummed or picked parts. 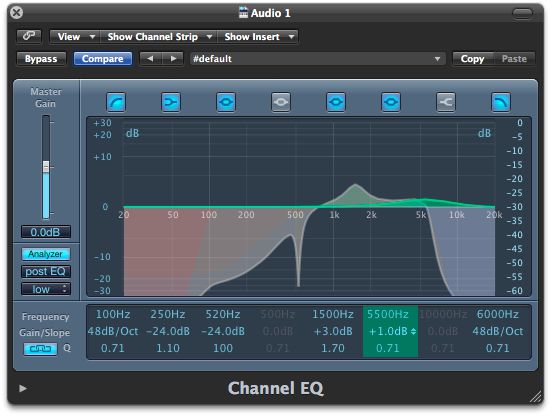 Generally speaking, the Analyzer is most useful in post-EQ mode so you can see the results of the changes you have made. Setting the resolution changes how many points are analysed between 20 Hz and 20 kHz. Opening the advanced settings tab at the bottom of the plug-in window lets you slow down the decay of the displayed curve which can make analysis easier for a sound that is not changing in frequency content over time. Finally, adjusting the dB scale at the right hand side of the display, by dragging, allows you to see what's going on at difficult to hear frequencies, like those below 50 Hz. 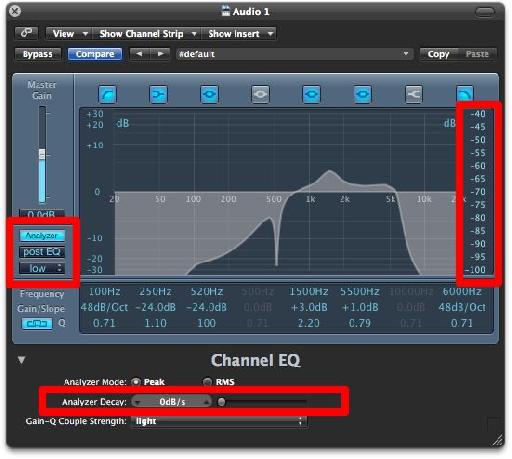 Stay tuned for the next part of the Mixing Electric Guitars in Logic series. Coming soon!