All Articles Logic Pro
Phase Out Phase: Quick and Easy Automatic Double Tracking in Logic
Mike Watkinson on Sat, June 11th 3 comments
Language
Whether invented by accident by Les Paul or, as others say, by Ken Townsend at Abbey Road in 1966 (and used on John Lennon's voice), automatic double tracking (ADT) is a way of thickening...

Whether invented by accident by Les Paul or, as others say, by Ken Townsend at Abbey Road in 1966 (and used on John Lennon's voice), automatic double tracking (ADT) is a way of thickening and creating a stereo image from a mono recording, as if the performer had indeed recorded a near identical part for a second time. It continues to be a key feature of record production especially for vocals but often for guitars and other instruments, and is typically used to differentiate between verse and chorus. This quick tip shows you a quick way to create the effect in Logic Pro, and then a way of checking for the problem that it may cause!

Make a copy of the audio region by Option-dragging it to the duplicated track.

Pan the two channels hard left and right. You might think that this is all you need to do, but if you think about it, all you have done is recreate what happens to a mono source when panned centrally, the only difference being that it will be 6dB louder!

Insert a Sample Delay plug-in on the copy track. The idea is to recreate the effect of the second part hitting your ears at a different time from the first, so the higher the number of samples delayed the further apart the two versions appear to sound. Up to a certain point the effect is as though you are listening to a single sound that seems to have '˜width', but beyond that point, it sounds more like two separate sources. 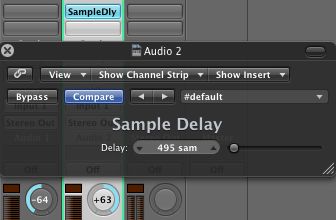 The problem with this method is that phase cancellation might occur when the mix, which you have monitored in stereo, is played back through a mono system such as  a cheap TV or kitchen radio. Plenty of great records suffer from phase cancellation-related issues when auditioned in mono: later Beatles albums have been criticised for their poor audio quality when heard in mono, and the guitars on Nirvana's Smells Like Teen Spirit definitely suffer compared to the same track heard on a stereo system.

You can test your mix by bouncing in mono. Go to the Output channel strip (normally stereo), click the mono/stereo format button to change it to mono, then click the Bounce button on the channel.

Note: this option is not available when bouncing from the File menu or the toolbar.

You can also check for potential phase-related issues by using Logic's Multimeter plug-in, and selecting the Goniometer display. This usually displays some dancing string, so it is useful to know what you are looking for! Anywhere between tall and thin and perfectly circular will be fine when auditioned in mono, but if the circle start to flatten, this is an indication of potential problems, with the worst case being wide and flat!

If the Goniometer display shows something between the first and second images, you should be OK when listening in mono, but not if it starts to look like the third image!

Check back for a follow-up article that will show you how to recreate ADT without phase cancellation problems!