All Articles Logic Pro
Using Envelope Followers and Auto Filters in Logic and Reason
Mo Volans on Sat, March 5th 0 comments
Language
Filtering is a great way to add life and attitude to your audio but sometimes the results can be a little static. Aside from adding time consuming automation to introduce movement you have the option

Filtering is a great way to add life and attitude to your audio but sometimes the results can be a little static. Aside from adding time consuming automation to introduce movement you have the option of using an auto filter or envelope follower.

Quite a few DAW's feature these as bundled plug-in's but I'm going to focus on two in particular, Logic's 'AutoFilter' and Reason's Simpler Envelope controlled filter.

Logic's AutoFilter plug-in can be found right at the top of the filter folder. Once loaded you'll notice it's quite complex and feature rich. Don't worry though it's pretty easy to break down and a lot of fun to use.

With the AutoFilter loaded as an insert on your chosen track you'll notice that the sound has changed straight away. This is due to the fact that the default setting is pretty heavy handed.

I always initialize the plug-in and you can see the settings I use in the screenshot below. Starting in this way just allows you to hear your audio untreated. 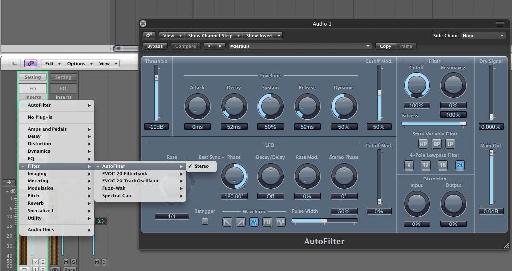 Now head to the top right of the plug-ins interface where you'll find the core filter controls. Try turning up the resonance a little and manipulating the cutoff frequency. For this example I have left the filter in low pass mode but it's well worth checking out the other modes.

The fatness control is an interesting touch here and allows to you add a lot of resonance without reducing the low end of the signal too much. As a rule I just leave this at 100% !! 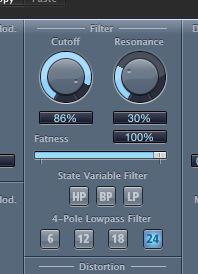 With some basic settings in place in the filter section we can now start to mess with the envelope follower. All of the envelope based settings are to the left of the filter. The first thing I would suggest here is to turn up the 'cutoff modulation' to a decent amount, this means that you will hear any adjustments you make take effect in realtime.

Now bring the threshold amount down until you hear the effect take hold. Remember this is an envelope follower, it works by sensing the incoming dynamics of your signal, so naturally it will work better with some signals than others.

You can alter the envelope settings to taste, experimentation is the key here but I tend to find that decay & attack emphasized settings work very well.

Listen to the dry untreated loop:

Listen to the same loop with the envelope filter applied:

If the envelope section is a little too unpredictable for you, or you are just using audio that hasn't got a distinct dynamic signature you could try dabbling with the LFO (Low Frequency Oscillator).

This works in much the same way as an LFO in a synth and it is capable of modulating the filter's cut-off. The LFO uses a number of waveforms and can be synced to your DAW's BPM. I have used a sine wave based LFO here.

You can also use the stereo phase control to create very straight forward auto-panning effects.

Listen to the loop with the extra LFO in action:

If you are a Reason user, or just fancy trying something a little bit simpler, you could do worse than taking a look at Reason's 'ECF-42 Envelope controlled filter'. It's an extremely stripped down half rack affair with only a few controls.

Essentially this little unit is capable of envelope follower type effects and features a very nice resonant filter that has two low-pass and one band-pass mode. Although Logic's AutoFilter is definitely more feature rich,  Simpler may just be the thing you are looking for. Well worth a go if you have Reason on your system.