All Articles Logic Pro
Remixing Vocal Stems in Logic Pro
Darren Burgos on Wed, February 20th 6 comments
Language
So, you want to remix a track? Darren Burgos invites you into his studio of tricks in this article as he reinvigorates vocal stems using Logic Pro. He's also kindly included the Logic project, too!

In this article I’ll be showing some techniques on taking control over vocal stems, and creative ways of working with them while remixing. A “stem” is a separated element from a song. It’s common to get the kick, snare, bass, synths, guitar, and of course the vocals. When doing a remix, you’ll often replace everything in the song with the exception of the vocals, so the focus of this article is on how to do stuff to the vocal track to get it sounding in line with your vision of the remix. We’ll be spanning the various vocal parts across the keys so they can be “played,” and outputting them to separate auxiliary tracks so they can be independently effected.

Step 1 - Open a project to work on

Open a project you’re working on, or follow along with the project included with this article. This is not me singing by the way! It’s a string of Apple Loops from the Voices Jam Pack. This groove is mine that I put together quickly for this lesson. I’ll start by specifying the area in the vocal track I want to process in some way. I’ll grab the scissor tool and cut before and after the part, then click the chosen area, to select it. Another way to do this is to select the region with the Marquee tool and click on the selected area with the Pointer tool. 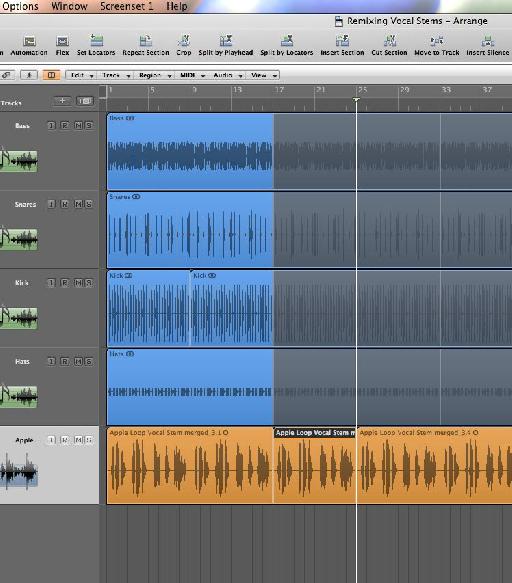 Step 2 - Slice up the audio with strip Silence

From the local audio menu, select “Strip Silence.” This intelligently attempts to remove the silent areas from a piece of audio, leaving you with separated regions of the parts you want. 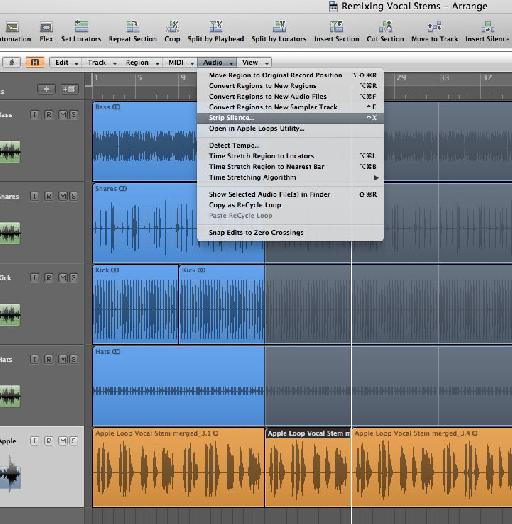 Often Strip Silence’s first guess is a good one, but to understand what’s going on in here, we’ll first pull all the values back and down to zero. Now start to adjust the Threshold upward till boxes contain only (or close to) the areas you want as separate regions. In my case, I raised my level to around 7% which created 11 independent regions. 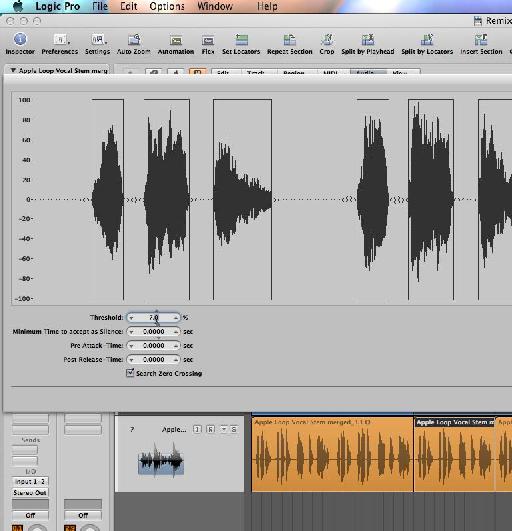 The higher the Threshold, the more individual regions will be created. Now start to adjust the “minimum time to accept silence” upward. Click onto the numbers themselves and adjust the value by dragging up/down, the arrows sometimes change this value too much (as in this case). The ends of the squares will lengthen. Continue to push this value up until the perfect amount of regions are found by Strip Silence. I adjusted mine to around 0.0600, and when I did this, I ended up with 10 regions since a small unintentional regions was absorbed into another.

Pre-Attack can be used to add a bit of time before the start of each region, and post release can be used to extend the ends much like minimum time to accept silence, but post release doesn’t re-connect regions that are after one another. It lengthens the regions only as far as the start of the next one. Leave on Zero Crossing, then click OK. Now let’s make a playable instrument out of all these slices.

Step 3 - Turn the regions into a playable instrument

Highlight all the regions that we just divided with Strip Silence, and from the Audio menu, select “Convert Regions to new Sampler Track.” 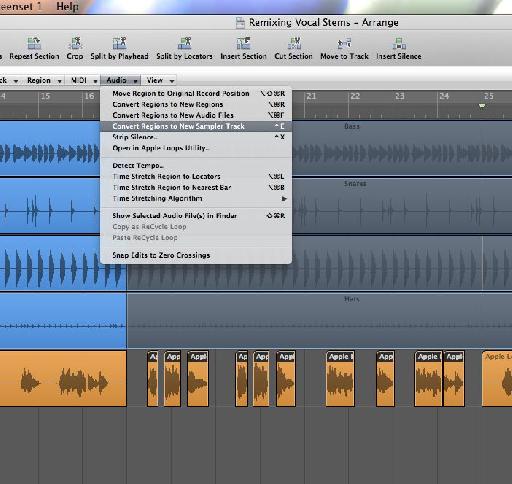 Choose the “Regions” option from the Create Zones From area, name the instrument something you’ll remember, and decide where you’d like the first region to start at on your keyboard. For example on my 49 key controller, when the octave button is set to zero, C3 is near the middle of the keyboard. I’m gonna Choose C3 as the bottom Trigger Note Range, and G8 (the highest) for the top. Click OK. 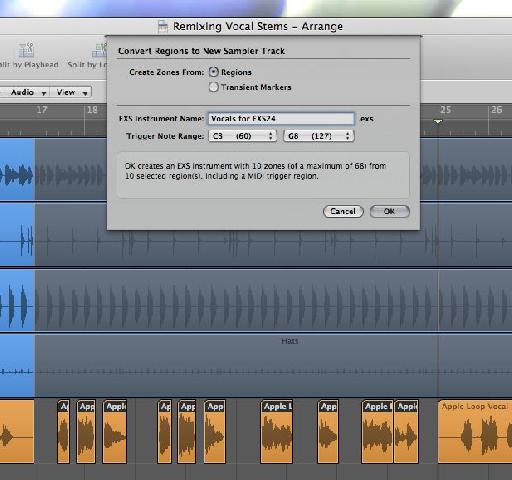 A new EXS24 instrument loaded up with the vocal samples will be created below. Make sure you’ve selected the new instrument track, and play notes C3 and up now on your controller, all the regions we strip silenced will be on a key and ready to be played in, or you can use the included MIDI file that re-created the exact timing the regions started and ended! Now that we can play the vocal on the keys, it’s easy to create different vocal patterns and stutters that would have been a daunting editing process if left as audio in the arrange window. 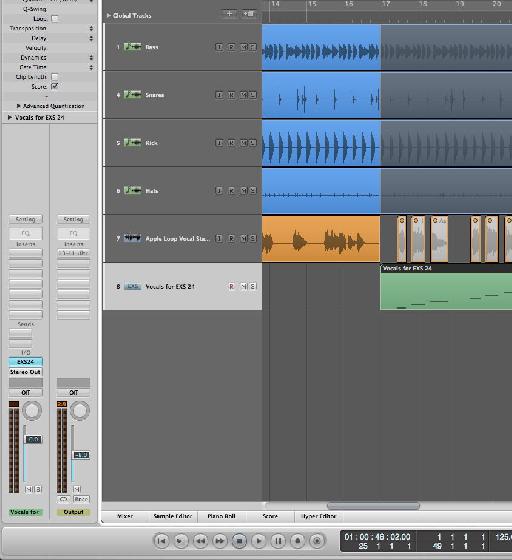 Step 4 - Send each region/key to a separate output

Now we’ll send all 10 vocal parts to separate tracks so they can be processed differently with effects. First click and hold on the instrument itself... it’s an EXS24. Choose the EXS24 Multi-Out version by selecting it from the list. You don’t have to worry about losing the instrument we just made, it will be automatically loaded into the Multi-Out version. 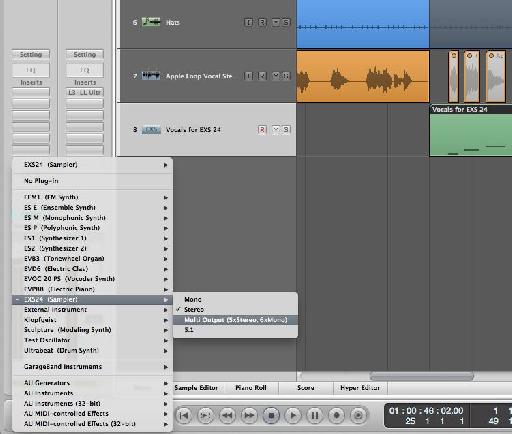 The EXS24 interface will open. Click the Edit menu on the EXS24’s interface (above the main Level slider near the top right). 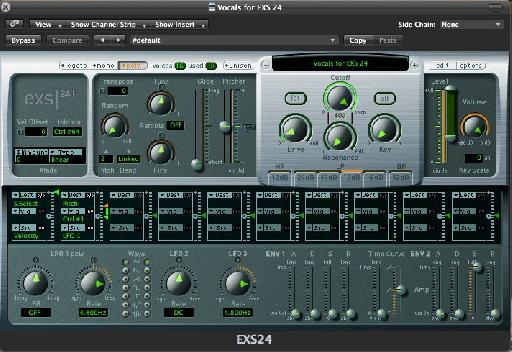 A list will appear showing all the regions. From the Output column, select an individual out for each of the regions. It should look like the image below. 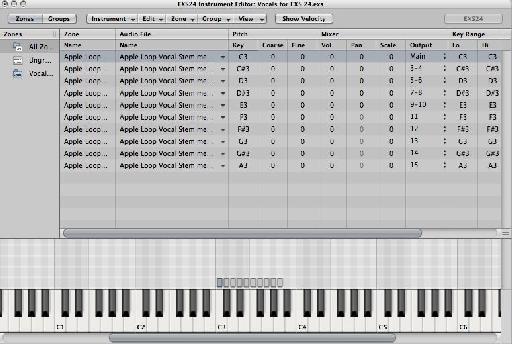 You’ll want to save the instrument at this point. Close the Editor window and a dialog will appear asking if you’d like to save. Choose Save.

Step 5 - Create the tracks each key will play on

Now, let’s create the tracks, that each separate vocal will be on. Press the X button on your keyboard to open the Mixer. Scroll to find the EXS24 instrument. If it’s still selected in the the Arrange window, it will have a green outline in the mixer window. When you find it, click the tiny + button on the track nine times. This will create the extra nine tracks we need so each vocal slice will be on an independent track. If you don’t see the + button, you missed the step where you change the EXS24 to the multi-out version above. Try playing from C3 up, and watch each of the Aux tracks we just created. Each key should be playing though the different Aux tracks. Since every vocal is on its own track, let’s start to add different effects.

Step 6 - Put effects on each of the tracks

The following are just a few examples of effect combinations I like to use, but experimentation is key here! You can’t damage anything, since they’re just plug-ins your adding onto each track. If you don’t like how it’s sounding, you can easily bypass any of them.

First you might want to add an EQ at the top of each channel. In the image below you can see that I’ve done this. This is a quick way to make some vocals, thin, muffled, mid-range, and more by adjusting each EQ differently. Reverb on one with a Compression after the Reverb will compress the reverb itself and make it more dramatic sounding.

Try a tempo synchronized Auto Filter on one of the tracks. You can filter up with an upward saw shape that will start the vocal muffled, then become clear over time. Copy the settings in the image below to get this effect: Try putting a pitch corrector on one of the vocals. Pull the Pitch Corrector’s Response all the way down to fast, uncheck all the notes, then recheck a single note that you want the vocal part to play as.

Set one with a backward reverb sound by adding a Space Designer, and clicking on the Reverse button at its top right corner. Give one a distorted sound by sending it through a guitar amp. Add the Guitar Amp effect and choose a setting under the Crunch or Distorted presets, then add a Delay after Guitar Amp Pro.

Make one sound gated by using the Tremelo effect. Copy the settings in the image below: Step 7 - Play a new vocal part and record it

Once you have all your effects in place, record some notes played in different ways, repeat notes in rapid fire succession for stutters, and release notes quicker than the part actually plays out for chops. Consider automating the individual effects you’ve added for  even more mayhem. Enjoy!

Here’s what I came up with:

Darren Burgos
Darren started making music on computers when he was a teenager in 1987. His first computer was an Amiga, and when he realized the power of computer-based production, his addiction for making electronic music began. Darren switched to Mac in 1994 and started using Logic Pro. He's been involved in many music projects over the years including Psychoid. For two years Darren travelled with Apple showing Logic Pro to visitors of Macworld, NAMM, Remix Hotel and NAB. Currently, he teaches a class in L.A. on electronic music production using Logic for Logic Pro Help. Darren also runs two small businesses on Mixing, Mastering and Logic Pro training and support.
Related Videos
Comments (6) 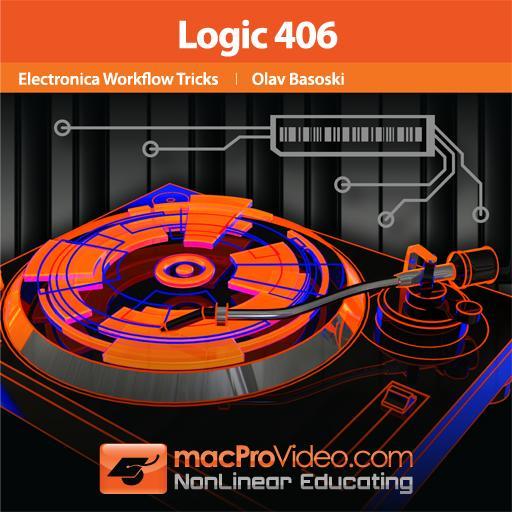 Dream It. Do It.
Do you want to learn Olav's Electronica Workflow Tricks?
Yes, I want to learn!
No Thanks, I just want to read the article.
Feedback
How are we doing?
We'd love your thoughts, feedback and questions regarding our new site. All feedback is appreciated!
We do not respond to this form! If you need support, please visit our support page.
Thank you for your input!
Your message has been successfully sent
Course Advisor
Don't Know Where To Start?
Ask A Course Advisor