All Articles Synths & Sound Design
Sound Design: Lady Gaga 'The Edge of Glory' Bass Synth
Richard Lainhart on Tue, July 19th 1 comments
Language
Lady Gaga has taken the pop world by storm over the past few years. Learn how to re-create (in Logic or your DAW or synth of choice) the bass synth from her hit single "Edge of Glory".

In this Quick Tutorial, we'll be looking at how to reproduce a synth sound from a recent pop hit, Lady Gaga's "The Edge of Glory":

In this case, because it's a fairly simple sound, we'll be using Logic's ES 1 softsynth to recreate the heavy bass synth sound you hear at about 1:05 into the song. Let's get started. Click and hold on the default EVP88 instrument at the top of the channel strip and choose 01 Logic Instruments > ES 1 Subtractive Synth from the pop-up menu... 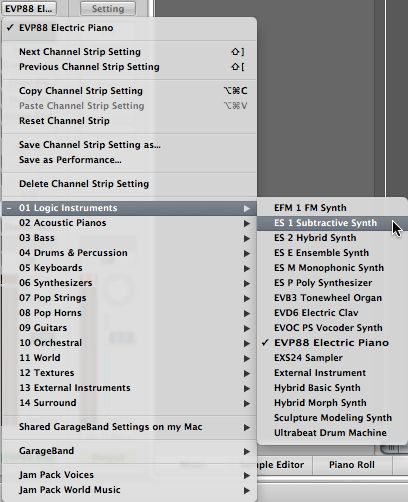 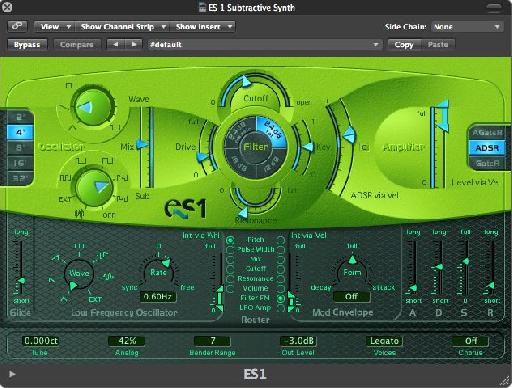 Next, let's listen to the sound: it's a little hard to make out clearly, because of all the other layers in the song, but the bass plays simple whole notes (A-E-F#-D) using a fairly dark sound with no filter sweeps or wah-wahs, unlike many synth bass sounds. The attack and decay are short, but don't approach a plucked or percussive sound. Closer listening reveals that the sounds consists of two sawtooth or square waves an octave apart, with a slight chorusing, and that the notes are played legato, so that there are no gaps between them.

So here's my ES 1 version: (click on the picture below to see a large version) 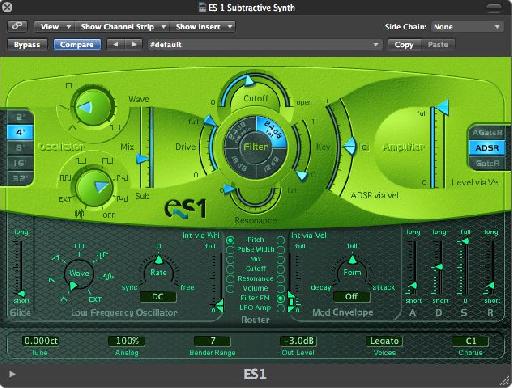 Check the settings closely and do your best to reproduce them as exactly as you can; if you do, you should hear a convincing version of the Lady Gaga sound.

Let's look at some of these settings in detail so you can understand what's going on:

Note that this is played legato, that is, each note is held down while the following note is played, so there's no performance gap between notes, and I'm playing this starting on the "A" an octave and a third below Middle C.

Check out The Logic ES2 Exposed tutorial to get a handle on synthesis in Logic and the Live 8 Designing Sounds for Dance Music and Live 8 Making Electronic Dance Music by Olav Basoski to give you a head start in sound design for the electronic realm of music.