All Articles Logic Pro
Top 5 Reasons NOT to be Afraid of Logic's Environment
Peter Schwartz on Wed, October 26th 19 comments
Language
For some reason mentioning 'The Environment' strikes terror into the heart of many a Logic user. But it doesn't have to be scary. Peter Schwartz is here to help you work through the fear.

The first step in environment aversion therapy is to confront that which you fear most. An innocent '" if not downright cute '" environment transformer.

Does anyone really need to use Logic's environment to make music?

The answer may surprise you, for it is this: "yes and no". Let's start with the "no" part first, to put at ease those of you who get a bit twitchy at the mention of transformers and such like'¦

You do not need to delve into the inner workings of the environment to run Logic. By last count there are tens of thousands of people producing music in Logic who hold not even the tiniest of concerns about what goes on "in there". This wasn't always the case, though...

Back in the early days of Logic'"the pre-virtual instrument days when MIDI devices ruled'"configuring a Logic system absolutely required a working knowledge of the environment, particularly for getting Logic to communicate with MIDI gear. Over the years, Logic's development saw ever-increasing capability, taking it beyond its origins as a MIDI-only sequencer to that of a fully-developed Digital Audio Workstation (DAW) capable of hosting plugins and running audio tracks. The introduction of CoreMIDI pretty much eliminated the need to configure MIDI devices directly in the environment. And later versions of Logic eliminated the once-necessary step of pre-configuring the number of audio channels in advance, thus requiring a trip into the (gasp!) environment if you needed to create more.

In short, as Logic's design progressed over the years, and as virtual instruments began to supplant their hardware counterparts, the need to custom-configure the environment in order to run Logic diminished. Nevertheless, even as of Logic 9, the environment still exists in pretty much the same form as it always has, causing some people to wonder, "Why?" And for those that ask "Why?", I would counter with "Why not?" in the form of my top 5 reasons why you shouldn't be afraid of the environment.

#1: You're Already Using It

This revelation might come as a complete shock, but it's true. Every Logic project has at its core a unique environment containing "objects", as they're called, responsible for such important things as routing MIDI data into Logic's MIDI sequencer. Every channel strip, instrument channel, aux, and MIDI instrument exist as environment objects, too. So really, Logic life can't exist without the environment and all of its objects.

Now, knowing this still doesn't put you under any obligation to tinker around in the environment. But then again you might just want to because, for starters...

#2: The Mixer Window Has Flaws

The Mixer window is great for showing you a representation of the channel strips in your project according to the order they appear in the Arrangement. And by clicking a few buttons we can choose to view only audio channels, only instruments, or even a single multi-timbral instrument and its associated auxes. That's all fine and dandy. But did you ever want to rearrange those channel strips so that they appeared in a different order? Aha, I thought as much! But unfortunately you can't do that in the Mixer window, and many people find this aggravating. 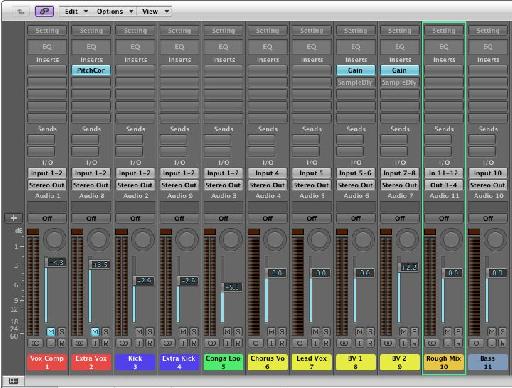 But there's a workaround: view the channels in the Environment's Mixer layer where you can rearrange channel strips without having to upset the order of your tracks in the arrangement. Here's how, ye who is afeared of the Environment:

Simply move your (still?) trembling hand up to the keyboard again and hit Command-8 to open an Environment window, select the Mixer layer, and start dragging the individual channel strips around so they appear in the order you want to see them in. Then clean up the display by selecting the channel strips you moved and choose: Options > Clean Up > Align Objects (from the Environment's local menu). There, was that so bad? 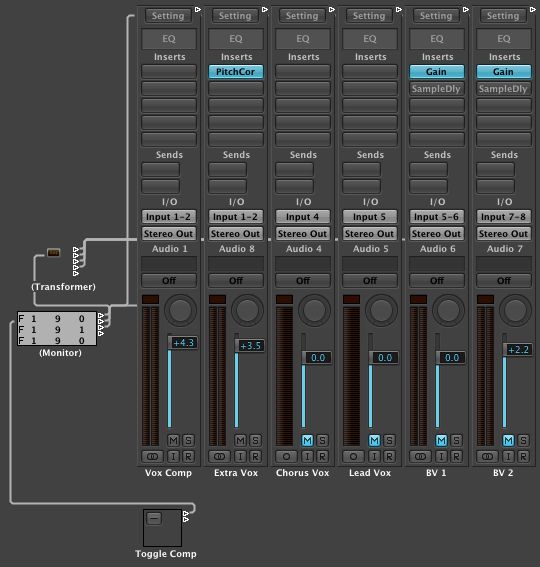 Mixer "layer" in the Environment. Here I placed all of the vocal channels in a group. 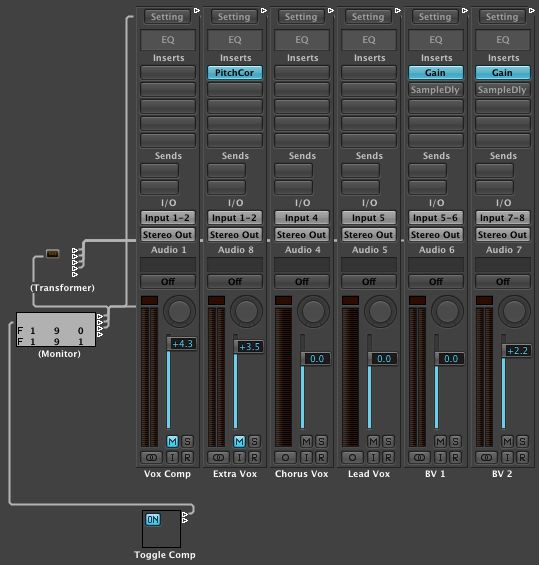 Mixer "layer" in the Environment. The A/B Switch is active. Notice which channel strips are muted.

Taking this idea of moving channels around one step further, you could create a brand new environment layer and move specific channel strips to it for the purpose of visually isolating them from all other channel strips. For example, during the course of a dance music production you used seven different instruments for drum parts and loops. The problem is, you didn't create those instruments so that they appeared in consecutively-numbered instruments, or on consecutively numbered tracks. And this means that their channel strips won't appear all nice and adjacent to one another in the Mixer window.

To make it easier to mix the drums, go to the environment, create a new layer, and move all of the individual drum and loop instruments to that layer. VoilÃ ! You can see all your drum channels at a glance!

Alas, if only we lived in perfect world, a world which can be made just a tad more perfect if we use the environment's capabilities to'¦

That's right. Your MIDI controller is lame, lame, lame if it doesn't have, say, more than one slider for controlling various aspects of synths, plugins, or channel strips. Lots of you have just such controllers. I know you do, because I've been to your studios and given master classes in your university music labs. 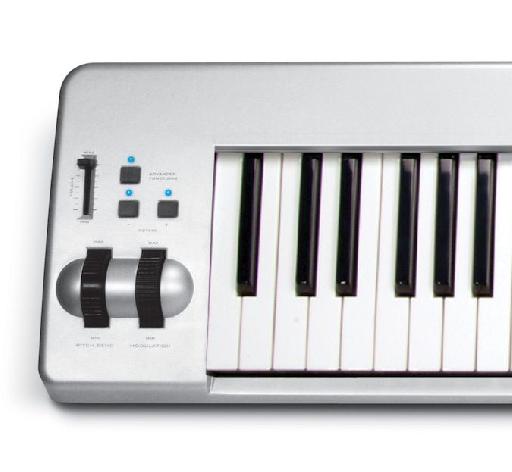 Now, having a lame controller is nothing to be too ashamed of, especially if you're willing to let your hair down a little bit and let the environment help your controller not be quite so lame. You can accomplish this by getting just a tiny bit familiar with a little object called a transformer. These deceivingly diminutive digital doohickeys let you accomplish such feats as converting your pitch bender into a panning control that always returns to center, convert the modwheel to act as a CC#11 (expression) control, and so much more.

A simple transformer which converts CC#1 to CC#11. The button labeled "Convert On/Off" is another easy-to-use environment object called a Cable Switcher. It's used to select between normal and converted operation of the modulation wheel.

Of course, you could use the Learn function (part of Logic's control surface programming capabilities) to create some of the features I described above. "Learn" is an extremely powerful feature, giving you the ability to control just about any channel strip or plugin parameter from the limited number of controls you have on your lame controller. But in many ways you'd be better off using environment transformers for these tasks, and here's why:

I'll go so far as to say that compared with the Learn function, environment transformers provide a greater range of control over the way you use various performance controls to shape the sounds you're playing. But even if you have the most non-lame controller on the market, replete with tons of programmable knobs, sliders and switches, there are still plenty of reasons to explore the environment...

Here's a small sampling of the questions I see regularly asked on various Logic forums:

By now I'm sure you can anticipate the answer to these questions: these types of control are accomplished by using the capabilities of the environment! And this brings us to reason #5 why you shouldn't be afraid of the environment...

#5: It Can Only Serve to Enhance Your Creativity

While I could cite a thousand other examples of how the environment can be used, I think the heading on this paragraph sums up the best reason of all!

For task-based tutorials showing how to get creative in Logic's Environment check out Steve H's Logic 304: Logic TNT3: Reloaded!

Learn all about the wonderful world of MIDI in MIDI 101: MIDI Demystified by Peter Schwartz.

Peter Schwartz
Peter Schwartz, composer, orchestrator, arranger, pianist, synthesist, and musical director, began piano studies at age 5 and went on to earn a degree in piano performance from Manhattan School of Music. It wasn't long afterward that he began working as a product specialist for New England Digital (Synclavier) and also as a sound programmer and design consultant for Korg. Meanwhile, Peter began to pave his way into the music business, and as a session keyboardist and arranger, eventually amassing a dizzying number of A-list artists to his client roster and discography. Peter has served as musical director for David Bowie, Madonna, The Pet Shop Boys, Enya, and many more. In more recent years, he has endeavored to make his mark as a composer for TV and film, adding Fox, Disneytoons, Warner Bros., Mattel, and The Gates Foundation to his filmography. Peter resides in Los Angeles with his wife Sharon, dogs Boing and Loosie, a bass clarinet and a bassoon.
Related Videos
Comments (19)