All Articles Logic Pro
Troubleshooting 101: No Audio Output from Logic? No problem!
Rounik Sethi on Thu, May 27th 18 comments
Language
Logic is a wonderfully deep, creative piece of software! There's no doubt about that...Â  It has steadily become easier to setup and use since Apple acquired it from Emagic But, as any software user .

Logic is a wonderfully deep, creative piece of software! There's no doubt about that...  It has steadily become easier to setup and use since Apple acquired it from Emagic But, as any software user knows, there are times when something can go wrong. It could be a head scratching moment whereby you're unsure of how to achieve something creative... or it could be an error or a bug that in some way prevents you from recording, mixing or simply making music!

So, what can you do? Well, the tutorials and forums are often most people's first port of call. But what about if you want to try and diagnose the issue yourself? You don't need to be a tech genius to solve some issues... equipping yourself with a toolbox of  troubleshooting tips can prevent any niggling issues from getting in the way of the creative process.

One of the more common problems experienced by Logic users is when you can't get any sound output from a Logic project. Whether or not the problem is down to user-error (it happens to the best of us!), hardware based (audio interface, control surface, monitors, cables, bad ram...), or a software bug or feature, these tips will help you diagnose it, understand it and ultimately solve it!

I'd recommend reading the tips below these even if you've never encountered an issue like this in Logic.

The 'root' step is to check that your audio interface is properly connected, the firewire/USB cables are connected from interface to Mac and all cables such as your Monitor and headphones are connected properly. Make sure volume levels are raised suitably and it's a good idea at this point to check that the cables are ok. Swap them out. If you're unable to swap them (what you don't have any spares?) then you can come back to this step later.

You should also check that you have the latest drivers for your audio interface and related hardware available on the manufacturers website. Always check before installing the driver(s) that they are compatible with the version of Logic and OS X you are running.

Audio MIDI Setup allows you to setup MIDI and Audio devices connected to your Mac. It's a good idea to check this little app out. It's located in your Applications/Utilities folder.

Choose Window > Show Audio Window if it is not already displayed. Check that you don't have any of the output devices muted. 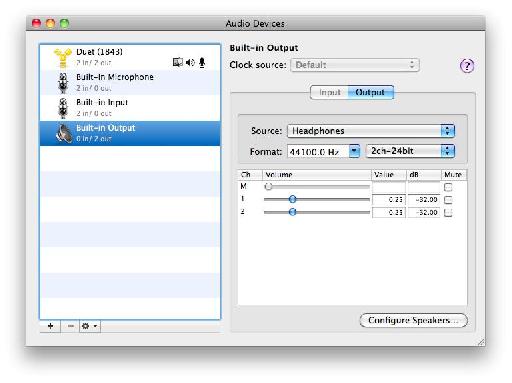 Another good test it to make sure sound is coming out of other applications on your Mac, e.g. iTunes... But once we've established that your Mac's audio is playing back fine, it's time to turn to Logic.

Under the Devices tab, you should see the Core Audio tab (which should be enabled). 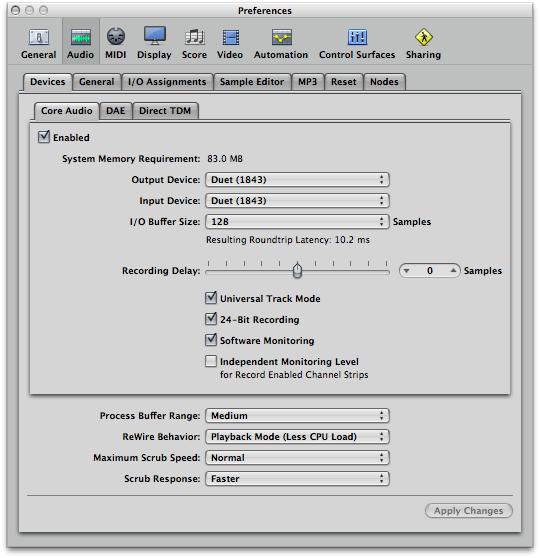 In Core Audio you'll find the Output Device and Input Device. Make sure these are setup appropriately for your audio interface.

In the image above, I have my Apogee Duet set as the Output and Input device. If you have an audio interface select it. If not, use your Mac's Built-In Output as your Output Device.

In Logic open the Mixer and make sure your channel strips' outputs are either being routed to the Stereo Out, or if you are routing them via a Bus, that the corresponding Auxiliary channel is begin routed to the Output. 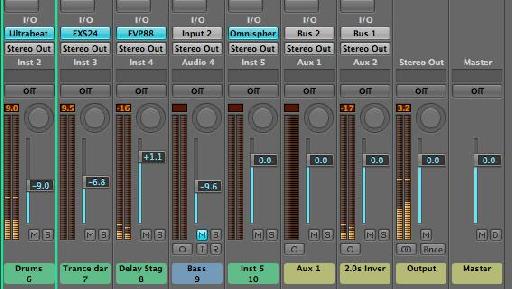 In the picture above we are able to ascertain certain information:

There's different ways to mute and solo in Logic. It's possible to mute/solo at channel strip level, track level, region level and even MIDI Event level (a single MIDI note for example).

In the following Mixer picture I have a single channel strip in solo mode, so the signal from other channels will be stopped from reaching the output. You can tell this is the case as the mute buttons will be flashing. 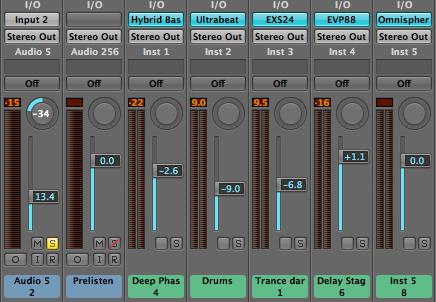 If for some reason you can't find the Soloed channel strip, either click on the All tab in the Mixer and manually search for it, or Option-click any channel's solo button twice. No channel strips will be in solo mode now.

Tip 6 - Solo in the Arrange

When in the Arrange area you may wish to solo a region or group of regions while arranging or mixing. Most users reach for the Solo button in the Transport or select a region and press the S key.

The selected regions become highlighted with a yellow border. However, if you deselect a region (by clicking on the background of the Arrange area you will not hear any sound from your project because no region is selected and Logic is still in Solo mode). 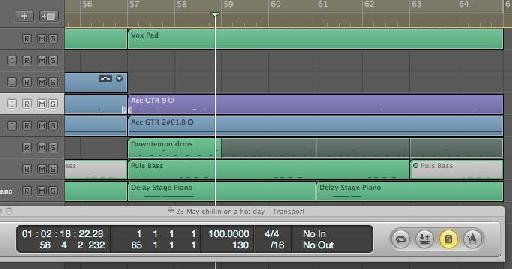 The solution is to check the solo button in the transport is off. If for some reason you've removed it from the Transport, you can tell when solo mode is active as the Bar Ruler is highlighted in yellow.

It could be that mute or solo automation has been written in your project. Choose View > Track Automation from the Arrange area's local menu and check for these types of automation.

Open the Mixer, Right-click on the Output Channel Strip and choose Create/Select Arrange Track from the drop down menu. 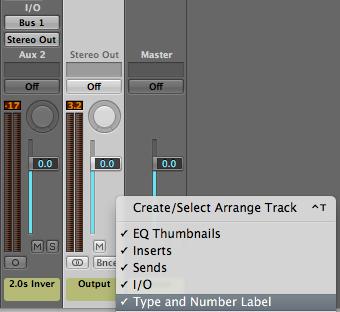 The Prelisten channel strip is used by Logic to preview Apple Loops and audio regions being played back in the Sample Editor.

It's normally reserved on Audio Channel Strip 256. Open the Mixer and click on the ALL tab in the top right. Scroll along until you find the Prelisten channel.

Now open the Loop Browser and click on any loop. You should hear some audio coming out of Logic and through your audio interface. If there is still no sound coming from the rest of your project, check the solo and mute buttons... 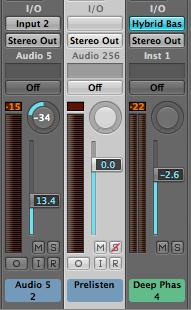 This is an interesting one, and was brought to my attention by a user on the macProVideo.com Logic forums. If you mistakenly delete the Stereo Output channel strip in the Environment or the Mixer you'll not hear any audio from your project unless you are routing audio to a different Output...

To remedy this, open the Environment and navigate to the Mixer layer. Here choose New > Channel Strip > Output 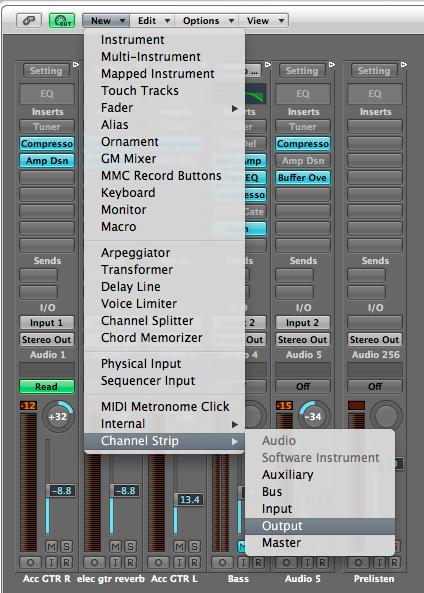 You should hear sound output from your project again!

It's unusual, but not unheard of, that a project can become corrupted. In this case try creating a brand new project and use the Prelisten & Output Device setup tips above.

Logic saves backups of your project file in the Project folder/ Project File Backups sub-folder.
Try opening one of these to see if your project can be recovered. If it can, save as a new project to a new location with a new name and continue working on that version.

You know, I won't let you go until I've talked about backing up your important files. So, go backup... use an app like Carbon Copy Cloner or Super Duper or Time Machine to backup your entire system... or copy your important files to an external drive or onto DVD.

And finally, here's some useful practical maintenance procedures that can help - and they definitely don't hurt!... The OS X Troubleshooting trinity:

Equipped with all the above Logic troubleshooting tips you'll not only be able to figure out some common and uncommon 'no sound' issues in Logic, but you'll come to be regarded as the Logic guru to all your friends.

Interested in learning more about Logic? These tutorials will help you to become proficient whether you are starting out or looking for advanced tips, tricks and techniques! We'd love to hear your tricks, shortcuts & opinions. Let us know what you think by writing a comment below!

Rounik Sethi
Rounik is the Executive Editor for Ask.Audio & macProVideo. He's built a crack team of professional musicians and writers to create one of the most visited online resources for news, review, tutorials and interviews for modern musician and producer. As an Apple Certified Trainer for Logic Pro Rounik has taught teachers, professional musicians and hobbyists how to get the best out of Apple's creative software. He has been a visiting lecturer at Bath Spa University's Teacher training program, facilitating workshops on using music and digital media tools in the classroom. If you're looking for Rounik, you'll most likely find him (and his articles) on Ask.Audio & macProVideo.com.
Related Videos
Comments (18)