There are tons of great synthesizers for the iPad. Some of my favorites are Magellan by Yonac, Sunrizer by BeepStreet, and Nave by Waldorf. All of these great instruments are iOS only, and are not available as Audio Unit plug-ins for direct use in Logic. Even the ones that are available on both platforms like Arturia's iSEM are just fun to use, and easier to program with the iPad's touch interface. In this article, I'll show you how to start using your iPad instruments in Logic Pro X just like you would with a Logic software instrument, but with the added bonus of being able to touch the parameters instead of click on them. Read on!

First things first'¦ get an iPad MIDI interface. You'll want to be able to play these instruments in the same way you play your Logic plug-ins'¦ live on your MIDI controller and even record and edit what you play. I don't recommend using MIDI over Wi-Fi or even over Bluetooth. There is just too much latency when working with these. If you're playing sounds with soft attacks only, then maybe Wi-Fi/Bluetooth could work for you. If you're a pad/keyboard drummer, or you play sounds with fast attacks like piano, synth, and organ, get either of the MIDI interfaces I recommend below and don't look back.

If you have plenty of available inputs on your audio interface (connected to Logic), you might want to go with IK Multimedia's iRig MIDI 2. With the iRig you simply connect the Lightning/30 pin connector to your iPad, and then the MIDI In/Out cables from the iRig, to the MIDI Out/In ports on your keyboard controller. You'll also need an 1/8 inch stereo to 1/4 inch left/right that you then plug from your iPad's headphone port into two available ports on your audio interface. 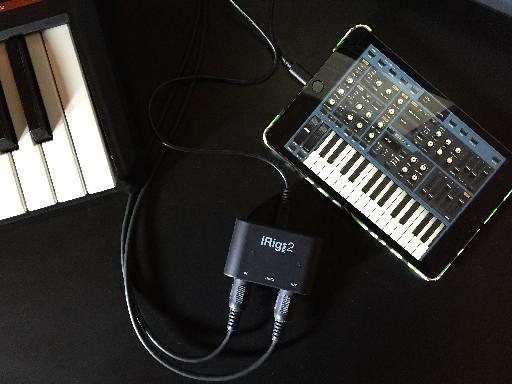 If your audio inputs are limited, then the iConnectMIDI2+ is the way to go. The astounding thing about the MIDI2+ is that it sends not only MIDI, but also audio! This is done through the lightning or 30-pin connection. Another great thing about this iPad MIDI/Audio interface is that unlike the iRig above, the MIDI2+ can be connected directly to your Mac through USB at the same time it's connected to your iPad. This completely bypasses the need to use your keyboard controller's MIDI ports as with the iRig. One cable connects to the iPad, and one connects to the Mac. Since the MIDI2+ is technically an audio interface that the Mac recognizes, you can either use it directly in Logic as your main audio input device, or as I've done, make an aggregate device to tie together your main interface and the MIDI2+. This allows them to be recognized as a single interface in Logic's audio preferences panel. 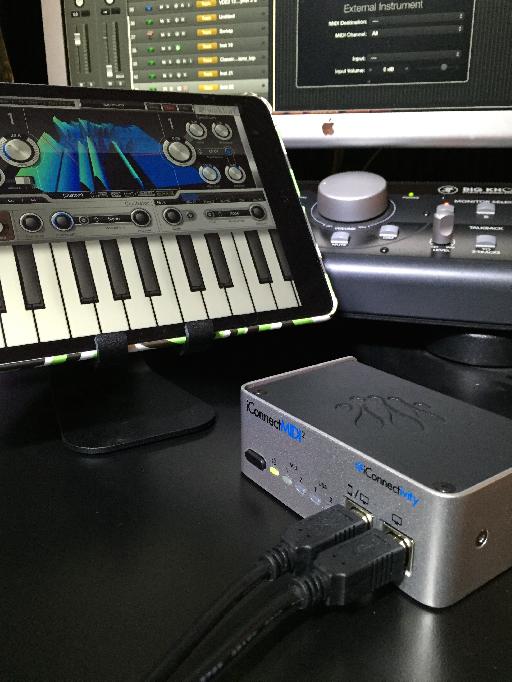 Getting the iPad Instruments into Logic

Once you've purchased either of the interfaces above, using your iPad instruments in Logic is a straightforward affair. Logic's External Instrument does the job perfectly. It not only feeds the iPad's audio through it, but also allows you to play the iPad instrument with your MIDI controller'¦ just as you would any software instrument. Add a new software instrument, and choose a stereo instance of the 'External Instrument' plug-in (In Logic 10.1 it's now located under the Utility sub folder). When the plug-in opens, from its MIDI Destination drop-down menu, select the MIDI interface connected to the iPad. In the image below, I've selected my iConnectMIDI2+ USB 1 connection. If you're using IK Multimedia's iRig (or other MIDI only interfaces) then you'll select the MIDI port of the keyboard controller (that you plugged the MIDI cables into from the iPad MIDI interface). From the External Instrument Input menu, select whatever channels the iPad is coming through on your Mac's audio interface or aggregated device, or the MIDI2+ directly (if you have one). In the below image I've selected inputs 13 and 14 which I labeled myself 'MIDI2+ Inputs' in Logic's I/O Labels window. I first created the aggregate device in the Mac's Audio MIDI Setup application, combining both my Apogee Quartet and the MIDI2+. I then selected the aggregated devices via Logic's audio/devices preferences window like I would for any audio interface. You should now be able to trigger your iPad synthesizers and drum machines with your standard MIDI controller connected to your Mac! If you don't hear anything, make sure the iPad synth/drum is MIDI enabled via its settings. 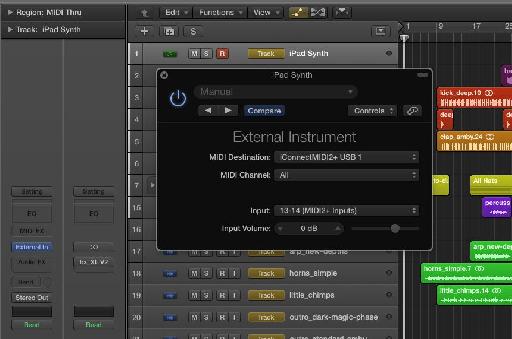 Now that everything is connected, and audio is coming into Logic from the External Instrument plug-in, you'll want to record some MIDI. Nothing is any different here than it is with a standard Logic instrument or third-party Audio Unit synthesizer. Simply press the record button and play in your part. You can easily edit and quantize, in the same way you would any instrument. Change your mind about the preset sound or want to tweak the sound? It's sitting right in front you on your iPad'¦ go for it! Keep in mind that you can't automate parameters like you can with Logic and third-party Audio Unit instruments. However, most iPad instruments allow you to assign parameters to regular MIDI controllers like the Pitch Bend and Mod Wheels on your keyboard. This data can be recorded along with your MIDI notes. For example, in the image below I used the mod wheel to open and close the filter cut-off on a sound in Sunrizer synth (you can see the peaks and valleys behind the notes).

Once you've perfected the part you'll want to record it as audio. Create a new stereo audio track and set its inputs to the same channels the iPad is coming in on your interface. Go to the start of the iPad/External Instrument part, make sure the new audio track is record ready and then press the record button. Logic will play back the iPad synth through the External Instrument track and feed its audio through to the new audio track. 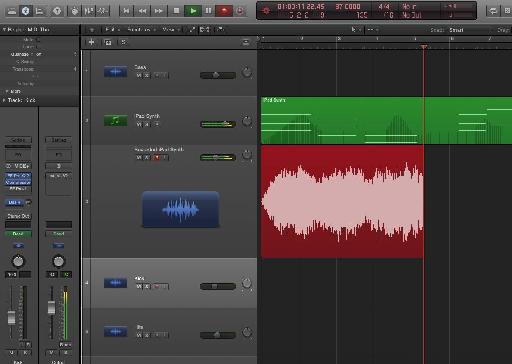 If you're getting a bit of latency, use Logic's Low Latency mode. If after recording the iPad synth you feel it's a bit late and slightly out of time, use Logic's Delay parameter (in Region Parameters) to pull the recording slightly back in time.

Thanks for reading and don't hesitate to ask questions here if you have them!

Darren Burgos
Darren started making music on computers when he was a teenager in 1987. His first computer was an Amiga, and when he realized the power of computer-based production, his addiction for making electronic music began. Darren switched to Mac in 1994 and started using Logic Pro. He's been involved in many music projects over the years including Psychoid. For two years Darren travelled with Apple showing Logic Pro to visitors of Macworld, NAMM, Remix Hotel and NAB. Currently, he teaches a class in L.A. on electronic music production using Logic for Logic Pro Help. Darren also runs two small businesses on Mixing, Mastering and Logic Pro training and support.
Related Videos
Comments (5)