All Articles Logic Pro
Using the ES2 Modulation Matrix in Logic Pro
Joe Albano on Mon, February 2nd 0 comments
Language
Joe Albano takes an in-depth look at how to make the most of Logic Pro's ES2 modulation matrix in this tutorial. If you're serious about modulation, this tutorial is for you.

In the earliest days of modular Analog synthesizers, all the components of a synth'"oscillators, filters, amplifiers, envelope generators, LFOs, sequencers, etc.'"were physically separate boxes, and to make even the simplest sound, you had to hook them together in the appropriate configuration with patch cords'"hence the term 'Patch', for a specific routing arrangement (and settings) of synth components. Since this was unwieldy, especially on stage, pre-wired synths were born, with the Minimoog leading the pack. These hooked up all the usual components in the most standard, most generally useful, way, and were a hell of a lot faster and easier to work with. But they did sacrifice the (almost) unlimited possibilities of modular designs to hook up the components in more creative and interesting configurations.

Modern synth plug-ins'"especially ones that come included in DAWs'"tend to go the pre-wired route, for easier accessibility. Logic offers several small synth plugs'"the EFM1, a basic digital (FM-style) synth, the ES1, a basic analog synth; and several small variations on that theme'"the latest addition, Retro Synth, incorporates elements of all of these. But Logic's biggest, most comprehensive synthesizer is the ES2, and, like many larger synths, it incorporates some degree of modular capabilities, in the form of a Modulation Matrix, which they've dubbed the 'Router'. 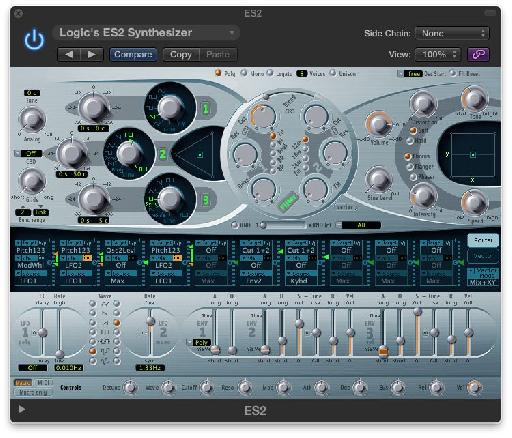 This is a comprehensive set of optional component routings'"10 in all'"that offer the more adventurous synth programmer the option of making his/her own connections between many (though not all) of the various modules that are part of ES2's design (Logic also incorporates a similar Matrix into the EXS sampler, as well). It allows for modulation control setups that are not part of the pre-wired design, and takes the ES2 a big step further into the realm of creative control.

ES2 is a classic subtractive synthesis design. Up top, it features three oscillators, which include analog and digital  waves, and even FM synthesis and Ring Modulation. There's a dual-Filter section, one multi-mode Filter, one dedicated Lowpass. The Amplifier section includes a few simple effects (distortion, chorus, flanging, phasing). Down below, the standard Modulators include two LFOs, with a selection of waveshapes, and three envelope Generators, one AD and two ADSRs, with built-in Velocity control. 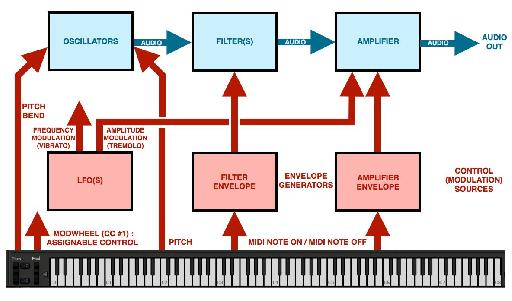 In the middle runs a strip'"this is the Modulation Matrix, or Router (this area is shared with an independent Vector section, but I won't get into that here). Each of 10 identical Routing slots has three settings: at the top, Modulation Target (destination)'"the parameter to be controlled, which includes most ES2 functions; at the bottom, Modulation Source'"this includes both internal Modulators and external MIDI/keyboard controls; and in the middle, the 'Via' setting. This last option functions as an Intensity (or Depth) control for the Mod Source'"whatever is assigned here will allow for control'"often real-time control'"of the amount of modulation effect in that slot.

To illustrate, here's probably the most basic, classic mod routing of all, modwheel Vibrato (which comes pre-set in a blank ES2 patch). The Mod Target is Oscillator Pitch (all 3 Oscillators in the default). The Mod Source is an LFO, set to a Sine or Triangle wave, with a frequency around 6 Hz or so. This will provide a slow, periodic, Vibrato-like Pitch variation. Just to the right of the menus in each slot is the Intensity slider. This determines how much of an effect the Mod Source (LFO) will have on the Mod Traget (Pitch). At its center position (which can be set with a click on the circle) there'll be no Mod effect at all'"intensity = 0. If you raise the Intensity slider, the strength of the effect will increase (Positive modulation). Lowering it (below center) will result in Negative modulation'"with an LFO, this would have the effect of reversing the shape of the wave (pitch up would become pitch down, etc.'"this is more obvious in other applications, and very useful). Setting the modulation intensity will determine how strong the Vibrato is (how wide the pitch variation).

But if you were trying to simulate the way a musician uses vibrato, this wouldn't sound right. This LFO 'Vibrato' is always on, for every note, but musical vibrato is not always-on, the player only does it on held notes, not quicker melody notes. This is where the 'Via' function comes in. By assigning Via to Modwheel, this puts the control of the Vibrato effect back in the hands of the performer, who can dial it up at will with the keyboard's modwheel, leaving it off when it would be inappropriate.

When a Via assignment is made, the Intensity slider takes on two settings'"minimum (green) and maximum (orange)'"this can be inverted by clicking on the little 'inv' next to the 'via' menu. Naturally, the minimum setting is the amount of mod effect you'll get with the Via control'"the Modwheel, in this case'"at its lowest, or 'off' position. This will be no effect if minimum is set to 0, but it could also allow for some mod effect, even at the wheel's 'off' position (this could even be a negative mod value). The maximum setting'"the equivalent of the value you'd set if Via was unassigned'"is, as before, the effect's maximum intensity.

Figure 4: A Router slot's controls: Mod Target (top); Mod Source (bottom); the 'Via' option (middle); and the Intensity slider; There is also a Via Intensity Invert switch, and a Bypass button for each Router slot

You can see and hear this in Fig 5 and the first audio example. There's the basic sound; the Router set up for the Vibrato effect; and the effect under modwheel control'"as the wheel is raised the intensity of the fake vibrato increases. 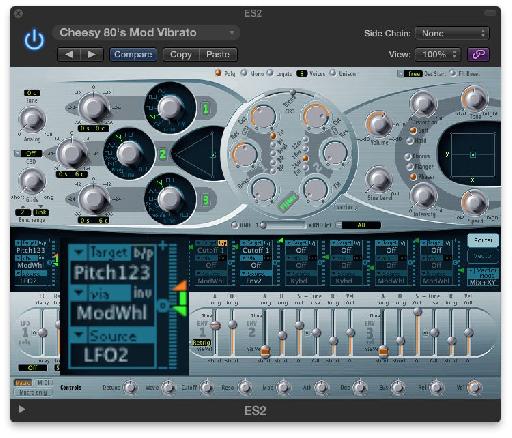 This is how all the Mod Matrix slots work. It really is pretty straightforward to set up a Routing'"the complexity can come when you start to get creative. The modwheel vibrato setup was a very simplistic example. If you do want to get creative, you can set up much more interesting effects. For example, it's easy to set multiple parameters to be affected by the same performance controller. Let's say I wanted to have a Distortion effect that can be leaned into by keyboard aftertouch or MIDI expression pedal. Unfortunately, the Distortion knob, in the effects section, is one of the few controls that is not offered as a Target in the Mod Router. But I can choose oscillator level, and use the pedal, in performance, to push the oscillator level into Distortion, for the same effect. So I'd dial up the desired amount of Distortion effect, and then set up a Mod Routing that puts the volume of the three Oscillators under a MIDI foot pedal (Ctrl A-CC#4, one of several common MIDI CCs available as Mod Sources in the Router).

But the only Mod Target that controls the level of all three oscillators (OscLScle) is a Scaling (multiplication) function'"that means that, at the Pedal's minimum position, level is multiplied by zero, and there's no sound, no matter where the Intensity sider is set. What I want instead is for the level to be unchanged'"Unity Gain'"when the Pedal is all the way down, and then increase as I raise it. But there is a solution. I'll set 'Max' as the Mod Source'"this is just a fixed Mod level. Then I'll use the Pedal (Ctrl A-CC4) as the Via assignment. Now the Intensity slider has two settings: I can set the maximum all the way up, but I can set the minimum not to the center (0), which would still result in no sound, but to a position part of the way up. I'll match this to the level of the basic sound with the Routing slot Bypassed, and now I have the behavior I want'"normal level @ Pedal down, Distortion @ Pedal up (This is what the 'Max' option is for'"to allow assigning the desired Mod Source to Via, taking advantage of the greater flexibility of the two-position Intensity slider).

If I want even more edge on the sound, I could use the same Pedal/CC4 to also control the Filter Cutoff of a Resonant Highpass Filter. I'd set this up in ES2's (multimode) Filter 1 (with Filter 2 serving as a simple, gentle lowpass), and, in another Router slot, assign 'Cutoff 1' as the Target and Ctrl A-CC4 as the Mod Source. Now both the Distortion and the Resonant Peak are summoned up by rocking the Pedal in performance. 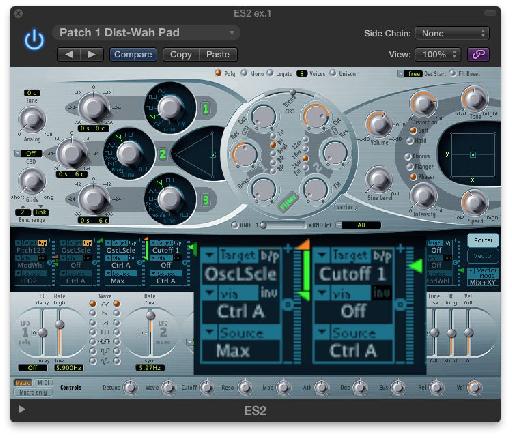 Figure 6: The settings for the complete first patch

I'll do one more quick example. This'll be a metallic digital sound with some aggressive LFO effects, again, under the performer's control. To get the metallic edge, I'll switch ES2's Oscillator 1 to its FM synthesis mode, about 3/4 of the way up. This will take the signal from Oscillator 2 and use it to Frequency-Modulate Osc 1. The Frequency'"the Pitch'"of Osc 2 will set the FM tone.

To give a little bell-like 'ding' at the beginning of notes, I'll use the Mod Router to control the 'Osc1WavB' Target'"this will affect the FM intensity. The Mod Source for this will be a very slight application of Envelope 1, set for a fast Attack and Decay, for the requisite metallic 'clunk'.

I'll use two more Mod Matrix slots to control LFO 1, set to a Square Wave shape. The first assigns the LFO to the Pitch of Osc 2 (Pitch 2)'"remember, this affects the FM tone. I'll assign the same Foot Pedal (CtrlA-CC4) to Via'"so the player can use it to call up the LFO effect. The second LFO 1 Mod Router slot will give control of LFO 1's Rate (the speed of the effect) to the Modwheel. Now the player can alter both of these LFO 1 parameters in real-time performance.. Figure 7: The complete Mod matrix Routings for Patch 2, as in Audio Example 5

These simple examples are just the tip of the iceberg when it comes to utilizing the power and flexibility of a Modulation Matrix like ES2's Mod Router. Now it's time to experiment'"you never know what you'll come up with, but it'll be worth the effort! 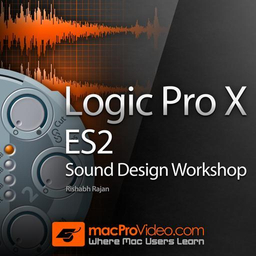