All Articles Logic Pro
Utilising Split Stereo Files in Logic Pro
Mike Watkinson on Mon, September 3rd 2 comments
Language
Pro Tools aficionados will be used to dealing with split stereo files. For Logic users, working with interleaved files has been the norm. So, what if you need to isolate each channel in Logic Pro?

In Logic Pro, the default format for stereo audio files is '˜interleaved'. Essentially this means that there is one file which is decoded on the fly into two channels. This is generally the most convenient way to deal with stereo files and is the format supported by nearly every applications on the Mac. But what if you need to isolate each channel as separate mono files?

Here are a couple of workflows which might lead you to want to do this:

If you are putting together the music for a movie project, the production company may supply audio that already exists such as voice-over, sound effects and atmospheres as split tracks on QuickTime movie files. This means they supply the video material for which they require music, with perhaps the voice-over on the left and the sound effects right of the stereo audio track that comes with that QuickTime file. Of course they will remix the levels of all audio in post-production, but it is really useful to have each independent element in your own project. This will also allow you to provide a rough mix of how your music will work with the images and their audio.

Where you have recorded a mono source (for example a microphone) to an application that only records stereo and have routed the incoming audio to only one channel '" in this instance it is handy to be isolate that single channel as a mono file.

2. In the Audio Bin (in the Media/Lists area) go to the local Audio File menu and choose '˜Add Audio File'¦' 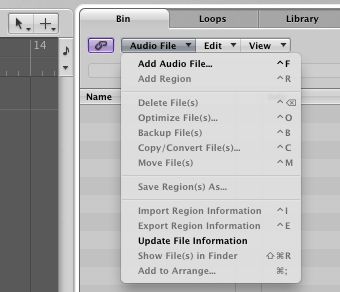 3. Locate the stereo file you need to split and add it to the Bin; if the file in question is a QuickTime movie file it can be selected as if it was a regular audio file. 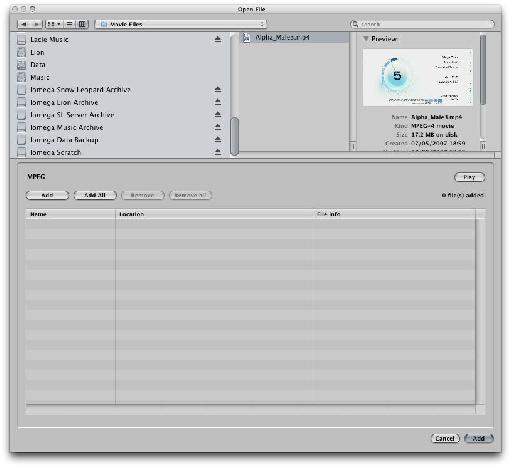 4. Logic Pro will convert it to its default audio file format on import (Preferences > Audio > General). 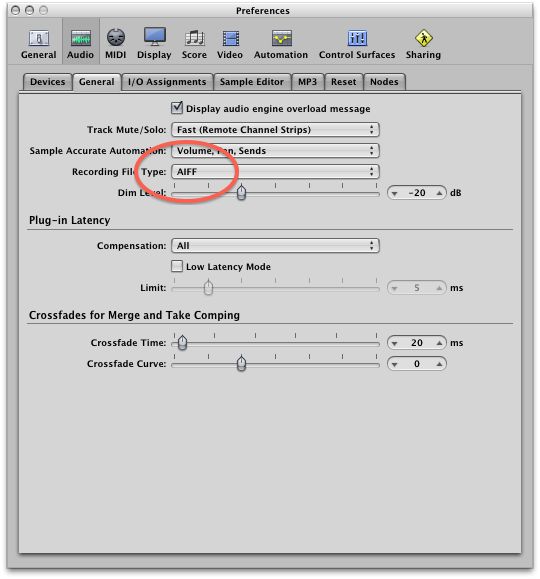 5. Select the audio file in the Bin, then in the local Audio File menu choose '˜Copy/Convert File(s)'¦' 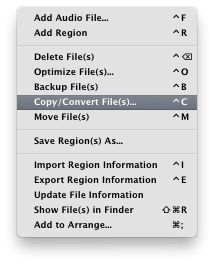 6. Leave all settings in the Copy/Convert dialog window set to default except for '˜Stereo Conversion' - change this to '˜Interleaved to Split'. 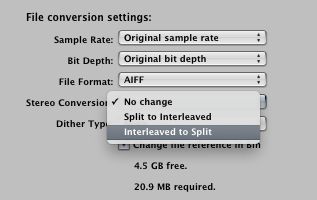 7. Don't forget to rename the file unless you want to overwrite the interleaved version.

You now have a split stereo file. This type of stereo file is essentially two mono files that will always play together and is the type that Pro Tools (up to version 9) understood. Pro Tools 10 thankfully supports both interleaved and split stereo formats!

Note, in the image below that the previously linked double circles are now separated. 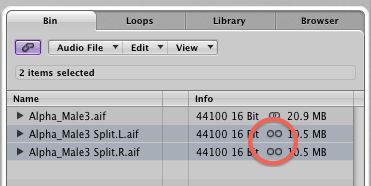 8. For our purposes we need to disconnect the split stereo file - so choose '˜Disconnect Selected Split Stereo File' in the local Edit menu of the Audio Bin. 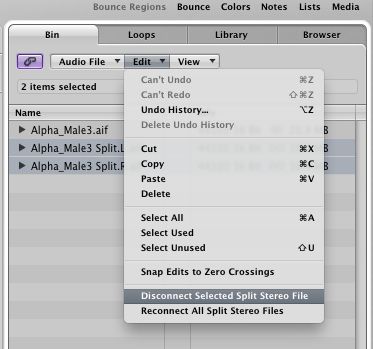 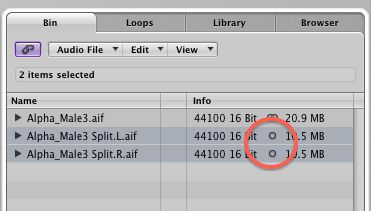 10. Drag the mono file you require from the Bin onto the Arrange area (either to the mono track you have already created, or to an empty space where an appropriate track will be created).