All Articles Logic Pro
Why The Logic X 10.2.2 Update Should Make You, Me & Apple Happy
Rounik Sethi on Thu, March 10th 0 comments
Language
Should we be happy at the latest update for Logic Pro X 10.2.2? Yes! Always good to have bug fixes. And there's an impressive new feature for auto-assignment of smart controls for MIDI controllers.

Software updates used to be a time of joy and wonder for me. These days I tend to look at them with a distinctly mixed emotional response. Like most other tech musicians and producers I want to play with new features and toys, but I also don’t want current features to get broken in the process.

Logic Pro X 10.2.2, however, looks like a minor, but pretty useful update. Not only has there been more bug squashing to help improve stability and reliability (read Logic won’t crash when option-dragging a folder stack or opening a Channel EQ plug-in window from Logic Remote), but there’s a really useful new feature included too.

Setting up a MIDI controller and assigning its controls to on-screen controls (specifically Smart Controls) used to be a drag and take some manual finger-work. By the time you’ve done the business I’d understand if your creative juices might be waning.

Along with minor feature enhancements and bug fixes, the new auto-assignment for controllers in Logic 10.2.2. shows me that Apple really seem to care about Logic users and are continuing to try and make our experience and workflow better.

So, back to the bug squishing and minor feature improvements/updates. Here’s what you can expect to find in Logic X 10.2.2:

Learn everything you could possibly want to know about Logic Pro X and more here.

Includes several improvements to Logic’s stability, including, but not limited to:

Learn everything you could possibly want to know about Logic Pro X and more here. 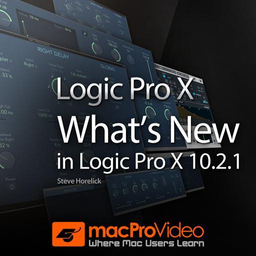