All Articles Logic Pro
Working With Track Stacks in Logic Pro X
Matt Vanacoro on Mon, February 19th 1 comments
Track Stacks are a great way to streamline projects, simplify working with MIDI instruments and a whole lot of other good stuff besides! Matt Vanacoro shows why you should be using them.

The ability to create track stacks was one of my favorite features added to Logic Pro X in recent years. Apple took a concept that started out as a simple way to organize your tracks in the arrange view and amplified it to the point where it brought advanced functionality and routing to your mix. There are 2 basic kinds of track stacks, and they both provide unique capabilities when put into action. Let’s take a look at them and see what they can do for the Logic-loving producer.

You may have encountered track stacks without even knowing it if you utilize Logic Pro X’s built in instruments on a regular basis. Ever call up a ‘producer’ drum kit or a complex synth and see a patch or track with a little arrow next to the icon? That’s a track stack! If you’d like to find one, create a new software instrument and assign that software instrument to one of the ‘producer kits’ in the ‘Drum Kit’ category. Click on the little arrow to the left of the icon in the arrange window and you’ll be able to see all of the individual tracks that are included in the stack. 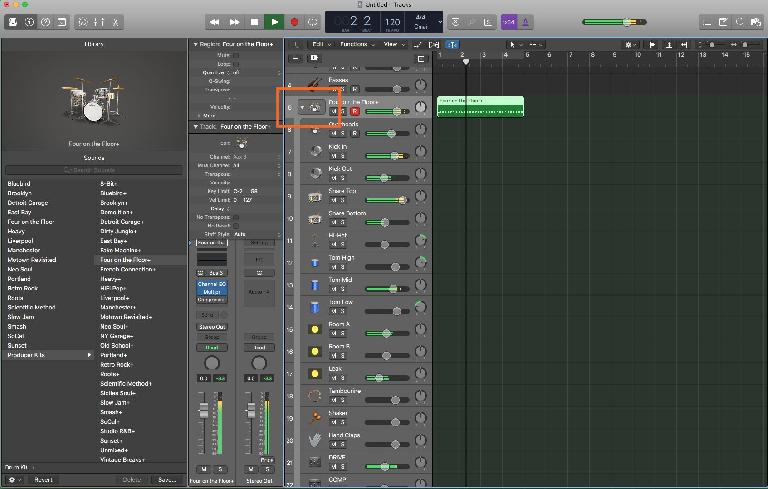 In the example above, you’ll see that I chose ‘Four on the Floor’ as my drum kit, and when opened up, you can see a subfolder of all of the components that make up a drum kit. There’s each individual drum, overhead mics, leakage, bussed compression… all the great stuff that goes into producing good drum tracks. This kind of flexibility is what allows the producer kits to be customized to sound more ‘real’.

The first kind of Track Stack is called a ‘Folder Stack’, and its purpose is mainly organizational. When you find yourself in a situation where you have a lot of tracks that you’d like to group together to tidy up the arrange/mix window workflow, you’ll want to use a Folder stack. Let’s have a look 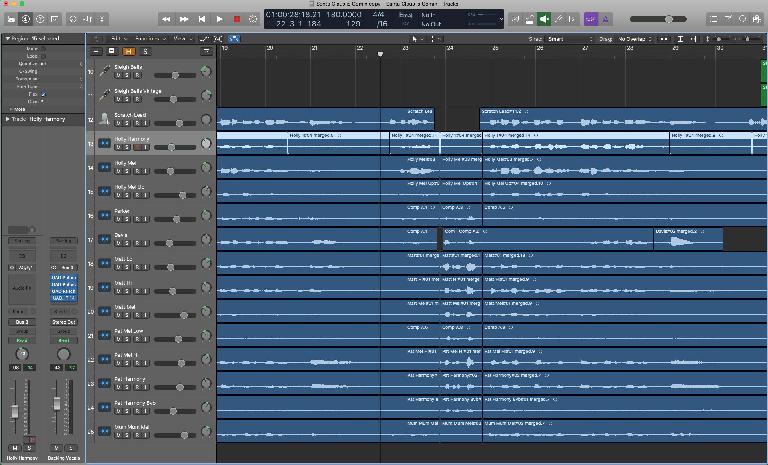 In this case, you can see I’ve got a lot of backing vocals for this track. I don’t necessarily have any global effects I’d like to apply to them all, each one is a very different voice type. I do, however, want to have them all grouped together because I’ve got them balanced perfectly and from now on I’d like to simply raise or lower the volume of the backing vocal group all together. I’ll shift-click to select each of the tracks, then go to the menu bar and choose Track -> Create Track Stack. 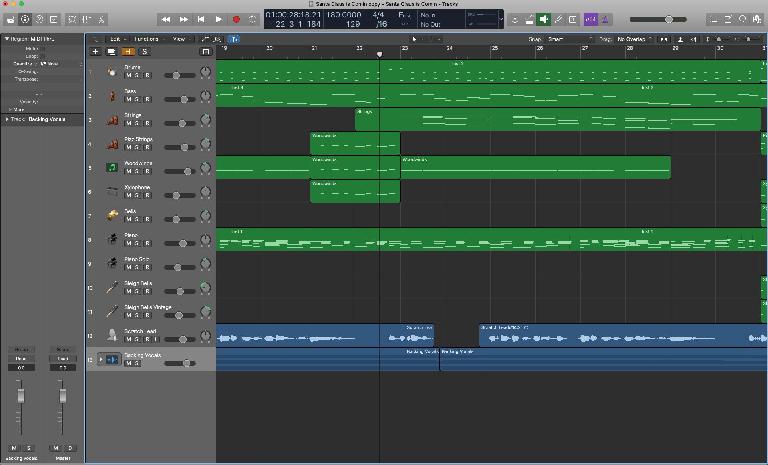 I picked a Folder stack, and I can see that the only thing that ‘happens’ to my tracks is that they get grouped together and have a common fader. I can adjust the volume, solo, or mute them all at once. This cleaned up both my arrange window AND my mix window. Since I’m done tweaking the tracks individually, I now have the convenience of simply adjusting them all at once as a group. Nice! If I ever want to get rid of that functionality, I can select the track stack, then go to Track > Flatten Stack and they will all go back to root level in the arrange/mix window.

Summing stacks include a little bit more functionality, but they also utilize the organizational benefits of folder stacks. In this case, I’m going to use a summing stack to organize some virtual instruments (although this works, of course, with audio tracks as well). I’ve got a few string tracks that I’d like to group together, share effects, and even receive identical MIDI. 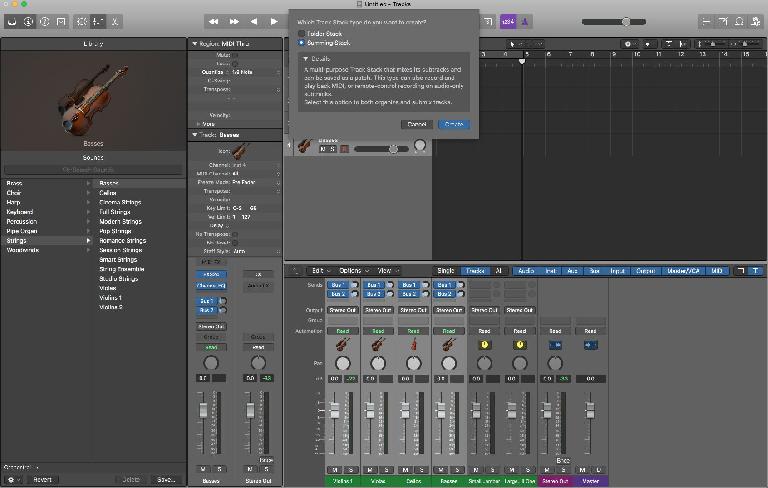 You create a summing stack in the same way you create a folder stack, only after choosing the menu option you pick the second radio button for ‘summing stack’. I’ve grouped 4 string parts together in this case, and Logic automatically routes all 4 parts to a new audio bus. This is the first major difference between the two. With folder stacks, the individual tracks are assigned to your main out. With summing stacks, the tracks are routed to a new unused bus, and the master fader for the summing stack controls that bus’s volume and channel strip characteristics. 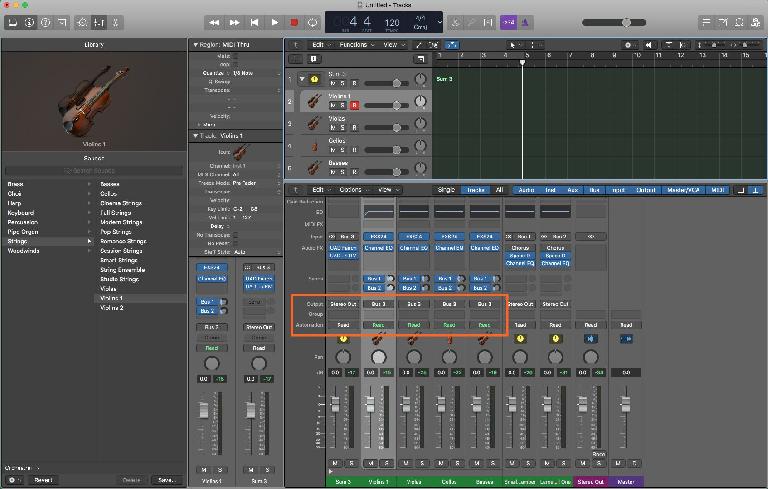 Now for the fun stuff! Since everything is routed to a bus (even if that bus is in a slightly different place than usual) you can assign some effects to everything on that bus. In this case, I put a nice reverb on the bus, as well as a compressor to smooth out the dynamics and group all of the parts together a little better. Be careful that you don’t have the reverb assigned via a send as well (unless you want to, of course!). Creating a track stack doesn’t invalidate any sends that you might already have set up. 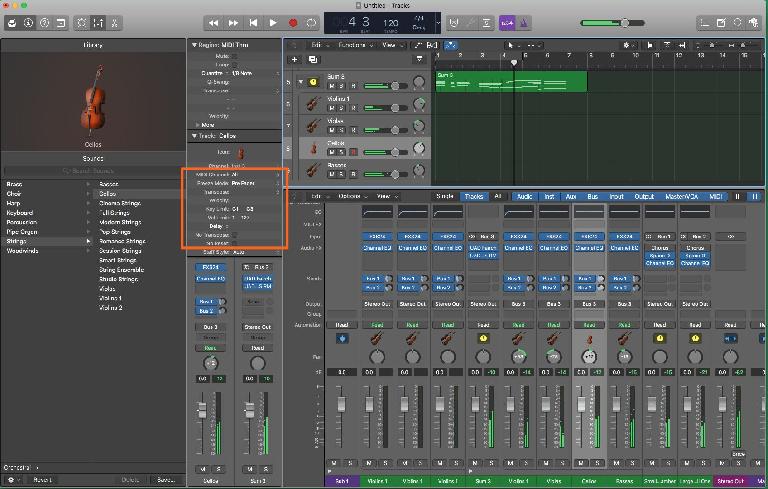 Here’s a quick and dirty example everyone can probably relate to. I’ve got 4 string patches set up here, but if I play some notes at the top level, the basses will be playing way out of their range with any of my right hand notes, and vice-versa for the violins. You can go into each track individually and adjust the track parameters to restrict MIDI range and ensure that each track only receives MIDI where it actually should. Then, you can pan each track individually to spread them out a bit and voila… you’ve got yourself a more realistic sounding string section! The kicker here is that you can save this track stack as an instrument setting in the library and open it up in MainStage to use it live! Score!

Track stacks have a ton of functionality and convenience packed into them. I suggest you get into the habit of using them and you’ll find they clean up both your workspace and speed up your workflow!