All Articles Mac OSX
Five Essential Mac OS X Tips
Richard Lainhart on Tue, May 24th 3 comments
Language
In this quick tutorial, we're going to show you five useful Mac OS X tips that you may not be aware of and that can help improve your productivity, solve problems, or just make your life a little more

In this quick tutorial, we're going to show you five useful Mac OS X tips that you may not be aware of and that can help improve your productivity, solve problems, or just make your life a little more convenient. Some of these are specific to more current versions of OS X, while others are more universal.

Suppose you're writing an email and you want to mention the current temperature. I can never remember the special keyboard combination for the "degrees" symbol, but I don't want to write out "75 degrees" either - it's uncool. That's where the Character Viewer comes in. First, you need to enable it, as by default it doesn't show in the menu bar. To do that in OS X 10.6 (Snow Leopard), choose Apple Menu > System Preferences, then click the Keyboard Preference Pane. Then click the "Show Keyboard & Character Viewer in menu bar" box: 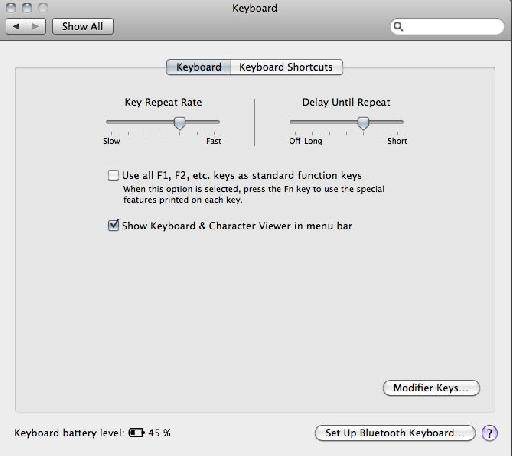 When you do, the Character Viewer icon will appear in your menu bar, next to your date and time (it looks like a little calendar):

Next enter your text (75, say), leave the cursor placed after the "5", and open the Character Viewer by clicking on its icon in the menu bar and choosing Show Character Viewer. Select Punctuation from the list, and locate the degrees symbol. There are actually several symbols that look like the degrees symbol, so to identify which is which,  roll down the Character Info arrow and select different symbols until the correct one is shown in the Info window: 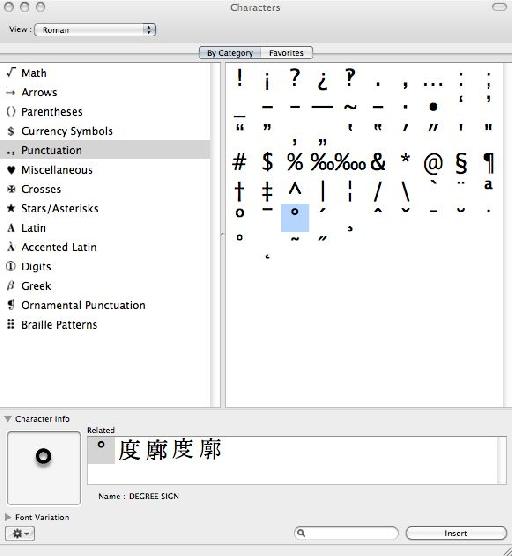 Once you've selected the right one, click the Insert button to insert the degrees symbol. This works with all the symbols and special characters shown in the viewer, of course, not just degrees.

You can create a PDF of any printable window in your system, including Web pages; PDFs of Web pages will include all the page's images, and will even maintain the active links in the page as well. To do this, bring the window forward - a Web page, for example, and choose File > Print..., then click the PDF button and choose 'Save as PDF...:

In the Save dialog, you can specify a title, author and keywords for your PDF, and even add security features like requiring a password to open the PDF, or a different password to print it. Printing a PDF of a Web page will include all the text and images in the page, even the stuff that might be off your screen. Depending on how the page has been designed, its physical layout may or may not be preserved in the PDF, but all the data will be there at least.

Frozen or locked-up OS X apps are all too common, unfortunately, but thankfully there are a couple of ways to force-quit them without having to restart your system. The first is just to option-click on the app's icon in the Dock and choose Force Quit from the pop-up menu. The second is to hit Command-Option-Escape to open the Force Quit Applications dialog: 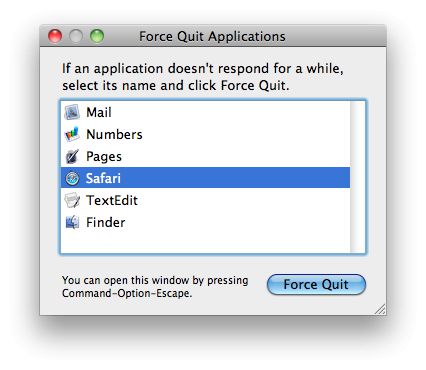 In that dialog, select the frozen app and click the Force Quit button.

You can put your system to sleep by hitting Command-Option-Eject (the CD eject button, that is). Although you can of course sleep your Mac by choosing Sleep from the Apple menu, for some reason I find this more immediate and gratifying, and I use it all the time.

Here's a feature that few people know about, even though it's been in the Macintosh system since well before OS X. Have you ever put a faulty CD or DVD into your optical drive, one that won't read but that also won't eject, no matter how many times you hit the eject button? A bad disc like this can choke your system while it's trying to read the disc, but you can get around it with this - restart your system, and while the screen is black, hold down your left mouse button and keep it down. What this action does is prevent your system from booting from any available discs, and has the added benefit of ejecting anything in your optical drive(s), including bad discs. Once the disc has ejected, just release the mouse button, and the system should boot as normal.

And there you go - I hope you've found these useful. Find out lots more Mac OSX tips here!