All Articles Mac OSX
How to Batch Rename Files in OS X Yosemite
Iain Anderson on Tue, February 10th 0 comments
Language
Every iteration of Apple's OS for Mac is described as the most advanced OS. But power-user features, like renaming multiple files, aren't as easy to achieve. Iain Anderson looks to change that here.

From time to time, you'll find that you need to rename a large number of files. Perhaps you've converted a DVD of TV episodes into .mp4, and they're numbered from 0 instead of 1. Perhaps you've split a PDF into hundreds of single pages (for whatever reason) and each one has the wrong name. Whatever your situation, OS X Yosemite has the feature for you'"batch renaming. 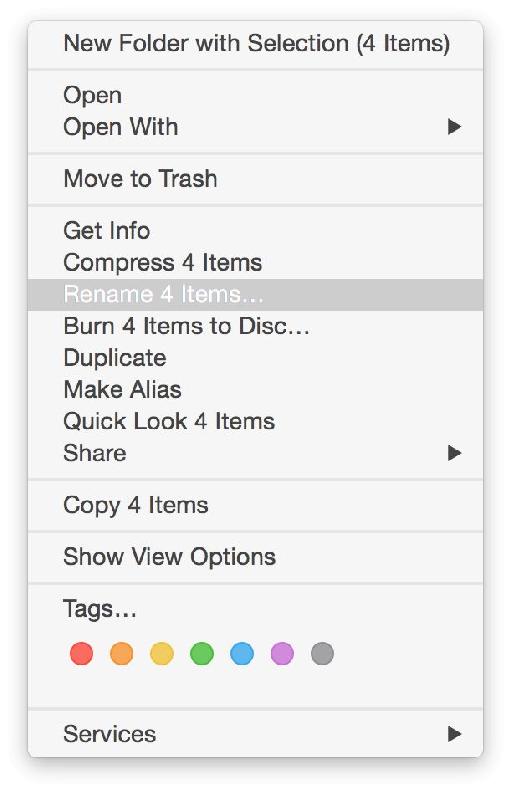 Select, right-click, and you're away.

It's easy to get started: select the files you want to change, then right-click (or Control-click) and choose 'Rename # Items', where the # reflects how many files or folders you've selected. When the sheet pops down from the top of the window, you've got three different ways to proceed, and quite a bit of flexibility.

Many files which all have the wrong name is the easiest thing to fix. Choose 'Replace Text' from the drop-down, then type the phrase to find on the left and its replacement on the left.

In this example, some images are being given a more friendly prefix.

Press Rename to proceed or Cancel to back out. You can always Undo if you do proceed and then change your mind.

If the name is largely OK, but you need to add a phrase before or after it, use 'Add Text'.

In this example, I've added ' FINAL' to the end of the file name, because I like to tempt fate.

It's not possible to change the extension, and 'after name' still means 'before the extension'. That's mostly fine, but perhaps a handicap in extreme situations.

Sometimes, you don't care about the existing names at all, and to completely replace the existing names, 'Format' is what you want. Within this option, you can choose a new Name alongside an Index, Counter, or Date. 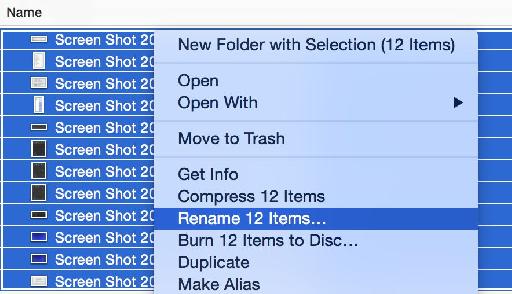 In this example, I've got a number of screenshots to rename.

A new name can be entered in the Custom Format field, and the difference between Index and Counter is simply that Counter has leading zeroes. You can set where the numbers start'"handy if only half of a batch needs to be fixed'"and also decide if you want the number before or after the name.

If the time and date doesn't matter, let's simplify the names.

If you want, you can use a date instead of an index, but it's not customizable, it's the full date and time, and it's right now. While that might be useful if you need to timestamp one file at a time, it's probably not what you're looking for.

If you need more power or flexibility, you'll need to look to a third-party alternative. I've long recommended Name Mangler, which was once free and is now $19. It can do everything we've discussed here and much more besides, including full GREP-powered find/replace, case changes, metadata extraction, extension changes, and many more advanced operations. Free options include Automator (in your Utilities folder now) and Renamer.

Anyone who has to manage a large number of files will find a use for renaming utilities, and we're well supplied with tools to do so. Still, it's hard to look past built-in and free. Next time you need to change the name of more than one file, don't do it the slow way'"right-click instead. 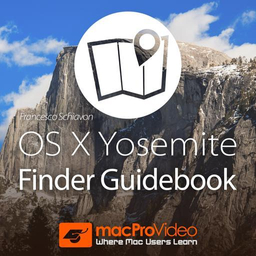 Dream It. Do It.
Do you want to learn The Finder Guidebook?
Yes, I want to learn!
No Thanks, I just want to read the article.
Feedback
How are we doing?
We'd love your thoughts, feedback and questions regarding our new site. All feedback is appreciated!
We do not respond to this form! If you need support, please visit our support page.
Thank you for your input!
Your message has been successfully sent
Course Advisor
Don't Know Where To Start?
Ask A Course Advisor