UNIX-based operating systems, like Mac OS X, are configured to run certain maintenance scripts automatically at certain times of the day. These scripts include daily, weekly, and monthly tasks, which include things like removing old log files, clearing out scratch and junk files, checking hard drives, and so on. These scripts are usually set to run between 4:00 and 5:00 AM, when presumably your system is not in use. However, if you shut your system down when you're not using it, as a conscientious energy-aware person should, those scripts won't ever get the chance to run. Eventually, all those dead old files and other junk will start to fill up your hard drive, and what's more, your system disk might begin to suffer performance issues.

So what we're going to do here is lead you through running those scripts manually through Terminal, OS X' UNIX command line interface, while at the same time introducing you to what may be an unfamiliar and even daunting environment. But don't worry - it really isn't that scary, as long as you're careful.

Terminal is located in your Utilities folder in the Applications, so navigate there and double-click it to launch it. You'll see a window like this (except with your computer name and user name instead of mine): 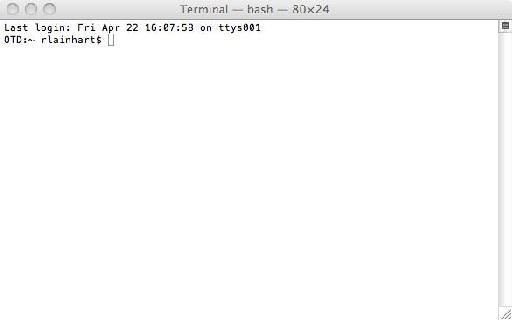 Next, type the following text "sudo periodic all" (without the quotes), exactly as shown here: 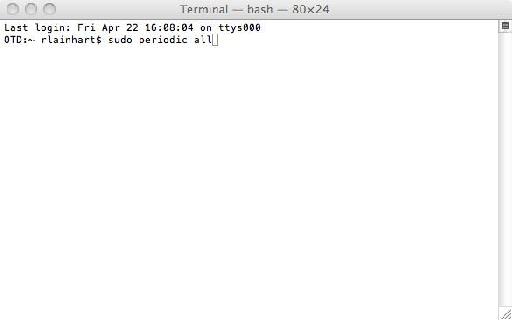 If this is first time you've done this, you'll see this rather dire warning: 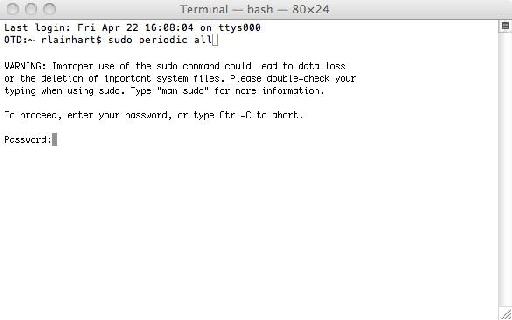 But it's still OK, as long as you follow the instructions and enter the text entries exactly. Enter your password as requested (as a security measure, you won't actually see any text when you type) and hit Return again. And that's it. You also won't see anything in the Terminal to indicate progress or the completion of the tasks, except that when they're all done, you'll see the prompt after your name again.

Or, if you find all this a little too frightening or deep, you can instead download any number of free apps, such as OnyX that give you a graphic user interface for running the scripts, and a lot more. But now you know the basics of using Terminal, at least. That wasn't so bad, was it?

Richard Lainhart
Richard Lainhart is an award-winning composer, filmmaker, and author. His compositions have been performed in the US, Europe Asia, and Australia, and recordings of his music have appeared on the Periodic Music, Vacant Lot, XI Records, Airglow Music, Tobira Records, Infrequency, VICMOD, and ExOvo labels. His animations and short films have been shown in festivals in the US, Europe, and Asia, and online at ResFest, The New Venue, The Bitscreen, and Streaming Cinema 2.0. He has authored over a dozen technical manuals for music and video hardware and software, served as Contributing Editor for Interactivity and 3D Design Magazines, and contributed to books on digital media production published by IDG, Peachpit Press, McGraw Hill, and Miller Freeman Books. Previously an Adobe Certified Expert in After Effects and Premiere, a demo artist for Adobe Systems, and co-founder of the official New York City After Effects User Group, he was, from 2000-2009, Technical Director for Total Training Productions, an innovative digital media training company based in New York and California.
Related Videos
Comments (4)