All Articles Mac OSX
Using Windows 8 under VMWare Fusion Part 1: Installation
Hollin Jones on Sat, July 6th 0 comments
Language
Want to run Windows on your Mac? There's lots of options around these days, so Hollin Jones explores VMWare Fusion in part 1 of 2 in this tutorial series.

Even before Apple switched from using PowerPC to Intel processors in its Macs, it was possible to run Windows virtually in OS X, using VirtualPC. And anyone who remembers doing so will know that while it worked, it was pretty slow and cumbersome because the Windows code was being continuously translated to run on an incompatible CPU. With the switch to Intel, all that changed and suddenly the brain of your Mac was not all that different to the brain of a PC, even if the look of your machine was very different.

Apple took what was at the time a fairly bold and unexpected step and released Boot Camp, enabling anyone with a Windows license to install Windows natively on an Intel Mac. The only catch was that you had to boot into it, so you were effectively running a PC. This has upsides and downsides. On the one hand, you get a full PC experience, with no performance compromises from running two operating systems at once on the same hardware. On the downside, you have no access to your Mac's files and folders because the Boot Camp partition is separate from your Mac boot drive. And Mac users as a rule prefer OS X, even if they sometimes have to use Windows for certain tasks out of necessity.

Enterprising developers VMWare, as well as Parallels, began to develop software to run Windows in a window inside OS X. The idea was that you could run Windows-only apps and test websites and other files in Windows but without having to reboot anything. You get access to your Mac files easily, and can keep things like Mail, Messages and other apps running while you do stuff in Windows. This is incredibly useful for many people, letting you work with files, archives and video formats which aren't supported on the Mac but easily sharing data between the real and virtual machines. As time has gone on, the software has become much more adept at using the multicore processors and higher RAM capacities in modern Macs and running Windows inside OS X is now a surprisingly smooth experience. Let's look at how to install Windows 8 under Fusion 5.

Fire up Fusion and select File > New to create a new virtual machine. Insert the Windows disc if you have one, or choose Continue without Disc to use a disk image later, which you may have if installing from a backup of an installation disc. If you have chosen a disk image, select it in the next window then press Continue. 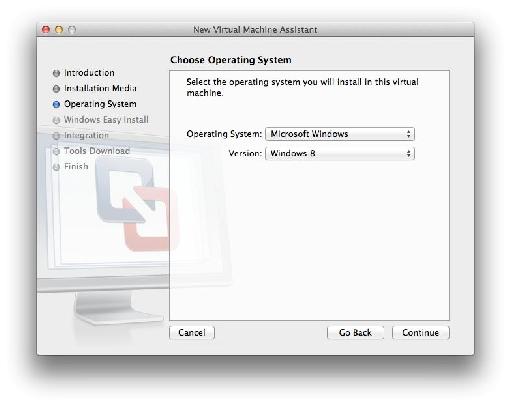 Fusion should detect the Windows version from your disc or image. In the next screen you can use Easy Setup. This skips several stages later on by automatically creating your username and password. You can choose not to use it if you like, and do these steps manually later. Enter your Windows product key here if you have one. If you have a volume license, you are able to proceed without a key. 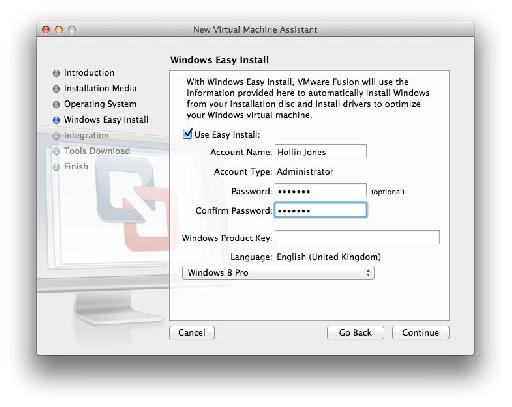 The next two screens ask you to choose a more secure or more shared install, changing the default settings for folder sharing between guest and host operating systems. Choose one, knowing that you can change these settings later. You are then prompted to download VMWare Tools, software add-ons which help to integrate OS X and Windows with things like drag and drop and better graphics translation. When this is done you are taken to a setup screen. Click Customize Settings. 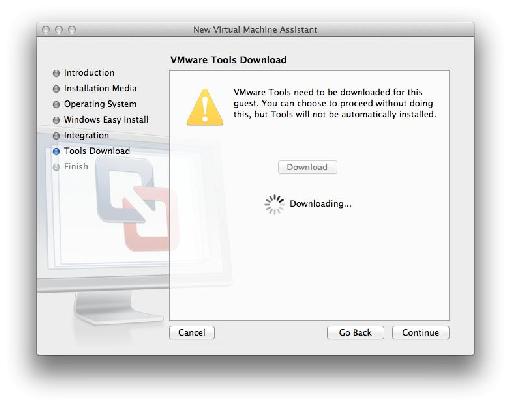 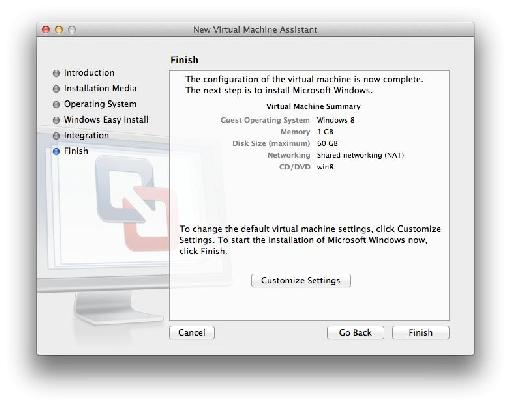 Choose a location for your virtual machine. This can be on an external drive, and since it might be up to 40 or 50 GB in size, choose somewhere with lots of free space. Again, you can move this virtual drive later. You are then taken to the settings screen for your machine. Most of these settings will be tweaked later, but initially you need to make some virtual hardware settings. Go to the Processors and Memory section and assign as many cores as you wish to the machine. One is not really enough for decent performance, two is sensible and four is great but may slow down OS X while running Windows. These can be changed later, and your choice depends on your Mac's hardware capabilities. Assign a decent amount of RAM '" around 2 GB if your Mac has 4 GB, or around half of whatever your Mac has otherwise. 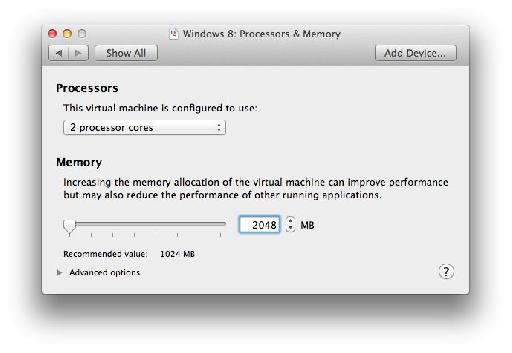 Close the Settings window and then choose Virtual Machine > Start Up. Fusion will boot from your disk or image and should initiate the installation process. This may take a while, so go and make a drink and wait for it to complete. On modern hardware it can actually take under ten minutes, which is pretty speedy. 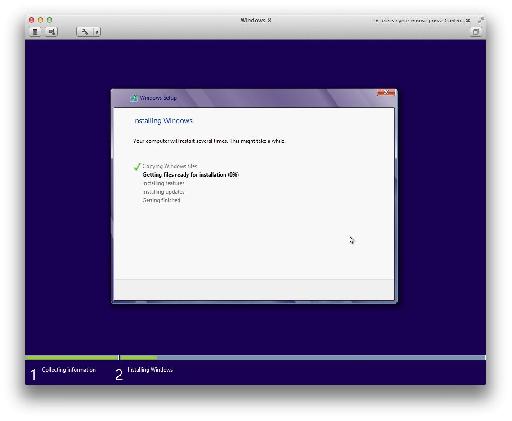 If you chose the Easy Setup option earlier, Fusion will have created a user account and password based on what you put in then. After a few restarts your virtual machine should boot to the login screen. If you have any weirdness, try restarting the VM and also check under the Virtual Machine menu that VMWare Tools have installed correctly. If not, choose to reinstall them. 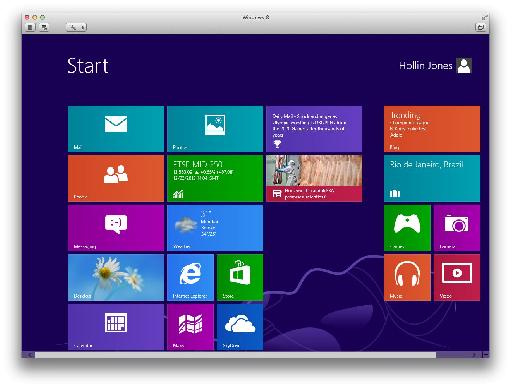 Step 7: Go to the Desktop

Once logged in you are presented with the Tiles interface but if you click on the Desktop tile you will be taken to a more familiar Windows desktop. Being really quite advanced, Fusion should have already detected and shared your wireless connection, keyboard and mouse or trackpad and you should find that Windows is online and running. Thanks to VMWare Tools, you can manually size the floating window by dragging its edges and Windows will adjust its screen resolution automatically. 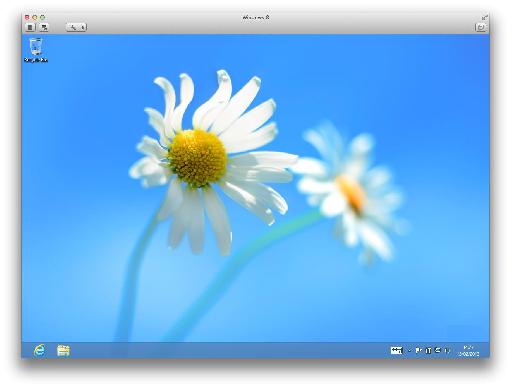 At this point and barring any problems you should be up and running. In part two we will look at how to go deeper, how to tweak your virtual machine for performance and security, how to share files and folders and how to further integrate Windows with OS X.