All Articles Mixing & Mastering
Mixing Orchestra Tips: Pre or Post Fader Send Reverb?
Peter Schwartz on Mon, May 18th 5 comments
Language
When mixing your next project (especially orchestral) spare a thought for your audience. Using pre-fader sends, Peter Schwartz shows how to simulate how sounds will be perceived.

I was inspired to write this article after discussing a situation with several composers who sought my advice on how to “put more distance between the listener and the direct sound of the samples”. In other words, their end goal was to simulate what an orchestra sounds like from the perspective of an audience member seated in the middle row of a concert hall, as opposed to the front row or even closer to the source—the conductor or player’s positions. Their proposed solution: set their reverb sends to be pre-fader instead of post-fader.

Now, if you’re not familiar with those terms, don’t worry. I’ll explain the jargon as well as the principle behind this engineering approach (which won’t work 99% of the time, but I’ll get to that). First, let’s explore what naturally occurs in the concert hall when an orchestra is heard “at a distance”.

When sound projects from the stage in a concert hall, it immediately begins to reverberate—reflecting off walls, ceilings, and floors and mixing in with the direct sound of the instruments onstage. Generally speaking, the sound of reverb itself is a sonic blur, lower in fidelity and less detailed than the direct sound. The further back you are in the room, the blurrier the sound becomes as the balance between direct (dry) sound and reverberant sound (wet) is skewed towards the wet. The effect of sitting closer or further from the orchestra is not much different from standing with your nose only inches away from a painting, compared to what you’d see if you put on glasses with frosted lenses.

Thus, when you want the orchestra to be perceived as being heard further away from the stage, you want to hear less direct signal and more of the blurry, indistinct reverb. That’s the simple, underlying principle. There are two mix engineering approaches we can take to simulate this: raise the level of the reverb’s outputs to be higher than usual, or lower the level of the all the dry signals and leave the reverb level where it was. Either way, the result will be the same: skewing the wet/dry balance towards the wet.

So how would it be that setting sends to be pre-fader can achieve this goal? Here’s the answer: in most situations, it can’t. If anything, this approach will throw off your wet/dry balance as soon as you move the faders while mixing. And to find out why, let’s very briefly review how sends work.

The traditional method for adding reverb to multiple sounds in a mix is to send signal from those channels to a common reverb plugin. This is done, of course, by configuring a send on each channel to pipe signal along a common bus to that reverb (see Figure 1). 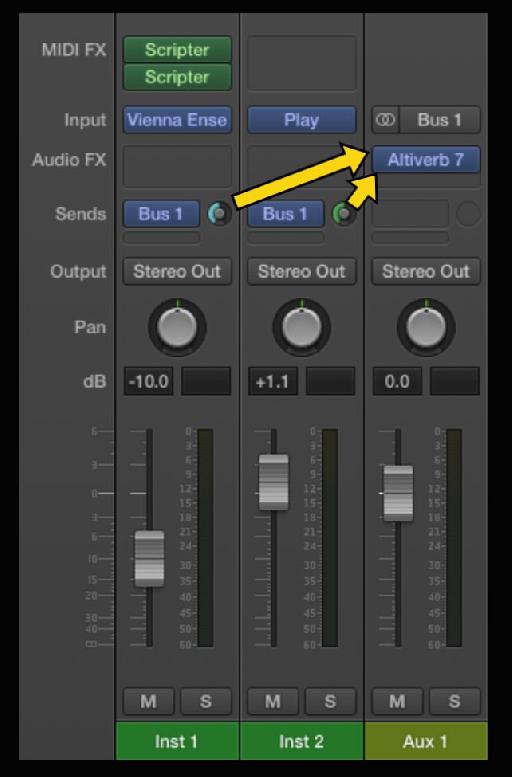 Thus, how much reverb you add to a sound (technically, how much signal you send to the reverb) is just a matter of how much you turn up the send. But whether that amount of reverb stays consistent over the duration of a part depends on how the exact point from within the channel that the send gets its signal from. And this is where the whole pre-fader/post-fader thing comes into play. 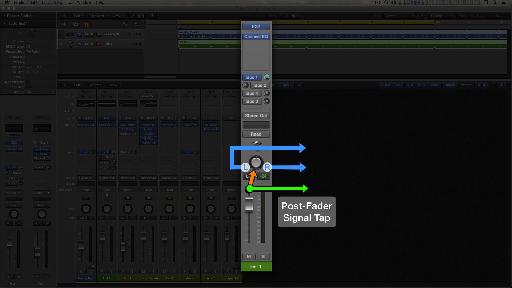 The default configuration for sends in hardware and software mixers is post-fader, where a send taps signal from a point after the fader has an influence on the overall volume level of the sound (Figure 2). However, it’s not uncommon to find an option for changing the tap point to be pre-fader, where the send receives signal from a point before the fader ever has a chance to influence the level (Figure 3). 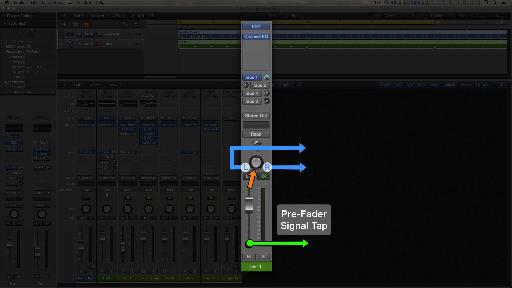 With a post-fader send, the amount of signal sent to the reverb will always be in proportion the level of the fader. Riding the fader up/down means that more/less signal gets to the reverb, respectively. The upside to this arrangement is consistency: after you dial in an initial amount of reverb on the send, no matter how much you ride the volume level of a part while mixing, the dry and wet signals will always be in proportion to one another. This can be heard in the following audio clip, where the same alto flute passage plays twice—first with the fader set at zero, then with the fader set at -12 dB.

The Opposite of Consistency

Now let’s imagine what would happen if adjusting the fader had no effect on the amount of signal being sent to the reverb. For example, let’s say you had a part that held on for too long and you wanted to fade it out by lowering the fader. If the fader had no influence on the level of signal being sent to the ‘verb, the sound would continuously and directly feed signal to it even after you completely faded out the dry signal. The result: you’d continue to hear the “ghostly” sound of the reverb long after you faded out the dry signal.

This might result in a cool effect, but it defeats the original purpose. So now let’s not imagine but hear this for real. In this first audio example you’ll hear a sustained note with post-fader reverb (and a click track) that lasts too long—two measures instead of one:

Next, I’ve faded the flute at the end of one measure, with the reverb send set post-fader. The dry signal will be silenced and only the last bit of sound that hit the reverb will ring in the reverb.

Now listen to the sound fading in the same way, but where the send is set to be pre-fader. The dry signal will indeed fade, but the sound that continues after one measure is purely reverb.

That’s Pre-Fader For Ya!

Indeed, with pre-fader sends, when you adjust the fader you lose control of the balance between dry and wet signal when you move the fader.

An equal and opposite problem occurs when you raise the fader. Here, the dry signal will get louder and become more direct without any increase in how much the sound reverberates in the room. This defeats the whole purpose of distancing the listener from the close-up sound. The louder you make a part, the effect is the same as physically moving that player or section closer to the listener! (See Figure 4).

Figure 4: raising the fader with a pre-fader send has the effect of moving the player closer to you!

How to Achieve That “Middle Row” Sound

The solution here is quite simple. First, don’t bother with pre-fader sends. Leaving them set to be post-fader gives you the ability to adjust the level of a part and maintain the wet/dry balance you dialed in on the send knob. To achieve a wetter overall sound, as though the listener is further from the stage, raise the output level of your reverbs (easily done), or lower the level of all of your dry signals (much harder). I’d suggest the first approach. Pretty simple!

Peter Schwartz
Peter Schwartz, composer, orchestrator, arranger, pianist, synthesist, and musical director, began piano studies at age 5 and went on to earn a degree in piano performance from Manhattan School of Music. It wasn't long afterward that he began working as a product specialist for New England Digital (Synclavier) and also as a sound programmer and design consultant for Korg. Meanwhile, Peter began to pave his way into the music business, and as a session keyboardist and arranger, eventually amassing a dizzying number of A-list artists to his client roster and discography. Peter has served as musical director for David Bowie, Madonna, The Pet Shop Boys, Enya, and many more. In more recent years, he has endeavored to make his mark as a composer for TV and film, adding Fox, Disneytoons, Warner Bros., Mattel, and The Gates Foundation to his filmography. Peter resides in Los Angeles with his wife Sharon, dogs Boing and Loosie, a bass clarinet and a bassoon.
Related Videos
Comments (5) 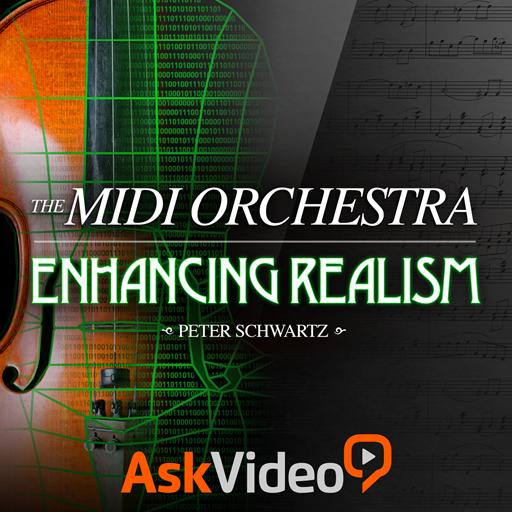