All Articles Mixing & Mastering
Mixing Tips: Understanding Multiband Compression
Joe Albano on Thu, December 11th 0 comments
Language
If you want to compress different frequencies of an audio signal you'll want to use a multiband compressor. Joe Albano explains the how and shows practical examples of multiband compression in action.

Compression is, of course, one of the most useful tools in the audio engineer's toolbox, and is widely employed at every stage of the recording process, from tracking to mixing to mastering. The majority of compressors act on the entire audio frequency range of 20'"20 kHz, and this is just fine'"even the slight artifacts (like the occasional pumping of the audio level) they may produce are often utilized for effect. But at times we need more control over specific audio frequencies in a compressed signal'"sometimes to avoid artifacts, or even to dynamically alter frequency balance. This is where multiband compression comes in. 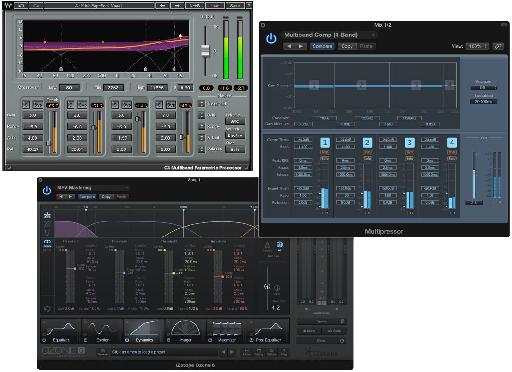 The More the Merrier

A multiband compressor is really a collection of several individual compressors'"typically 3, 4, or 5'" strapped together for use as a single unit. Dividing up the frequency range via crossovers, each individual compressor acts on only one frequency band within the 20'"20k range'"for example, a four-band multiband might process the bass range up to 100 Hz, the lower mids, from 100 Hz to 2 or 3 kHz, the upper mids, from 2 or 3 kHz to 8'"10 kHz, the high treble from 8'"10 kHz up (see Fig. 2). 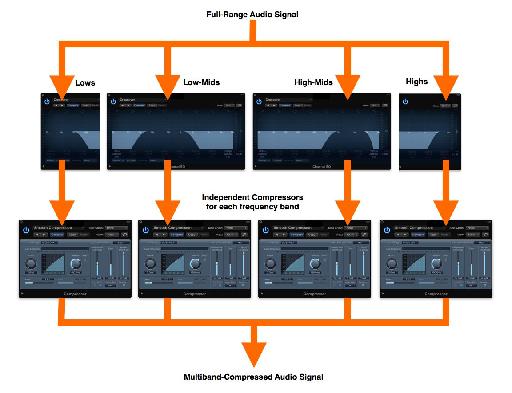 Fig. 2 The internal layout of a typical multiband compressor (you could even rig up your own this way!)

Multibands have been employed for years'"traditional radio stations were big users, stringing together multiple compressors, as shown above, to fine-tune their control over dynamics and avoid overages, while maintaining hot overall signal levels. Nowadays, in the digital era, multiband compressors are readily available as plug-ins, and put to use in many situations'"notably, in mastering, but also in mixing applications, especially on complex, full range signals like drum kits. But they're even used on single tracks'"achieving subtle dynamic control over a vocal is a popular use.

A typical multiband compressor, like Logic's 4-band Multipressor (Fig. 3), will have a full range of compressor controls for each individual band. 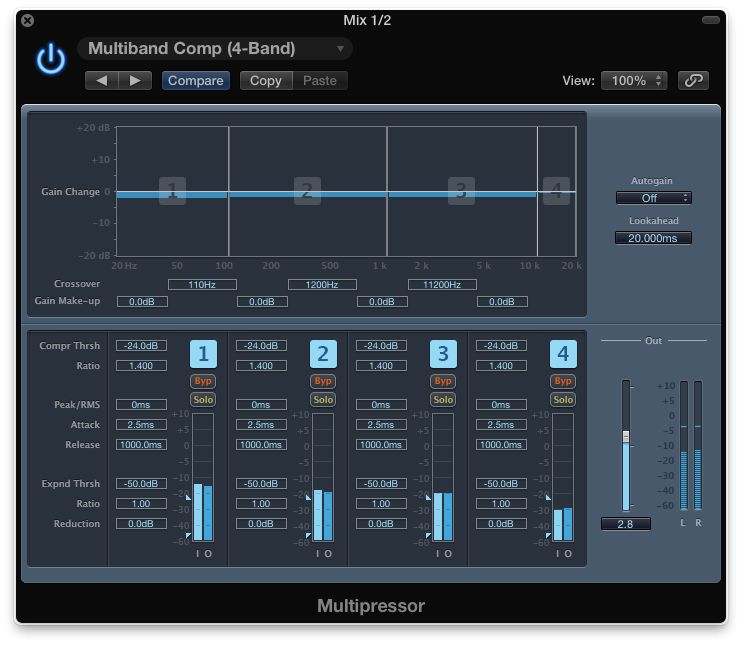 There'll be Threshold, Ratio, Attack, Release, and Make-Up Gain per band'"on some multibands you might also find control over knee (hard/soft response) or detection (average/peak level). You'll be able to adjust the crossover points that determine the ranges of the various bands. Even if you chose to set all the bands with identical settings, you'd get different results with the multiband than with a single-band compressor, since different parts of the frequency spectrum are being compressed independently (see Audio Example 1).

Audio Example 1: The same audio run first through a single-band compressor (1st half), then through a multiband (2nd half) with the same settings as the single-band in all bands.

Since most of the energy in music is greater in the (broad) midrange, and less in the low bass and high treble, audio in the highest and lowest bands won't cross threshold as readily, and will be subject to less gain reduction, resulting in the accentuation of lows and highs you can hear in the example. Of course, this can be compensated for, either statically or dynamically. You could (statically) set the Makeup Gain of each band to compensate for any unwanted changes to the frequency balance, using the multiband like a semi-parametric EQ. Or you could instead adjust the Thresholds for a more even frequency balance. Doing the latter would make that adjustment happen dynamically, depending on the moment-to-moment level of the audio in the different bands. With this approach, you could set it so that, say, bass or treble was reduced more when a big kick drum thump, or an aggressive crash cymbal came along, but still allow a subtle bit of the high and low frequency emphasis to occur in the quieter (or less aggressive) passages, where it might be welcome to enhance clarity.

In fact, achieving some control over individual instruments or vocals in a full mix has always been one of the main reasons for multiband compression, when it's employed on a mix bus or in mastering. The classic multiband application is the situation where it's used on a mix that has an excessive kick drum, along with other more steady instruments. A single-band compressor can tame the kick's sharp hits, but the other steady sounds may be pulled down with them, causing the audio level to 'pump' with the kick'"an undesirable (and amateurish) side effect (Audio Example 2, pt. 1) . A multiband compressor's low-frequency band will tame the kick hits, which have most of their energy in that bass range, while the other bands remain uncompressed'"unaffected'"by the gain reduction being applied to the kicks. While the frequency balance of the kick may be altered somewhat, the overall level of the audio remains smooth, without the dreaded 'pumping' (Audio Example 2, pt. 2). 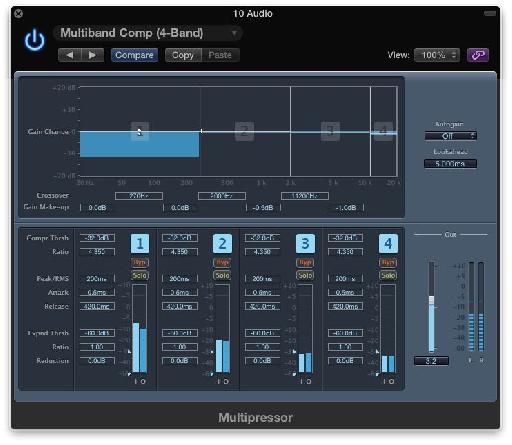 Audio Example 2: A kick drum that causes pumping with a single-band compressor is tamed by a multi band.

Of course, subtle adjustment of other frequency bands is possible too. A vocal (or guitar) that's too aggressive in one part of a mix can be pulled down by setting a midrange band from around 150 Hz to 3'"5kHz or so, and finding a Threshold for that band that reacts to the errant part only when it gets a little too aggressive, allowing the multiband to pull it down when it comes along, with less effect on other instruments, which may have more energy in higher and lower bands. This can also avoid unnecessary changes in tone in sections of the song where the part isn't as up-front, as you'd be stuck with, trying to accomplish the same fix with a static EQ adjustment. This is why Multiband compressors are sometimes referred to as 'Dynamic EQs''"they can be set to dynamically perform tweaks to the tonal balance only when needed, for a more subtle, more targeted, tonal adjustment of the audio.

But besides what may be their most common uses, on finished mixes in a mastering session, or as stereo mix bus compressors, multibands can also be utilized on individual instruments in a mix situation as well. They'd be especially useful for complex full-range tracks, like a full drum kit, where their ability to apply processing that has more effect on specific elements of the kit would be a distinct advantage. In the example below (Audio Example 3), overheads mics captured too much cymbal and not enough kick'"if there were no other mics on the kit, this imbalance would have to be remedied, with EQ and compression. But static EQ still dulls down the drums too much, and single-band compression on the overloud cymbals'"even with a band-limited sidechain'"has trouble taming the cymbals without impacting the kick as well (Audio Example 4). Multiband compression is able to process the weak kick mostly in its own band, applying less compression/gain-reduction to bring it up, and hold the cymbals down more effectively with the top two bands, leaving the snare and toms (in the midrange) with a nice bright, full tone (Audio Example 5). 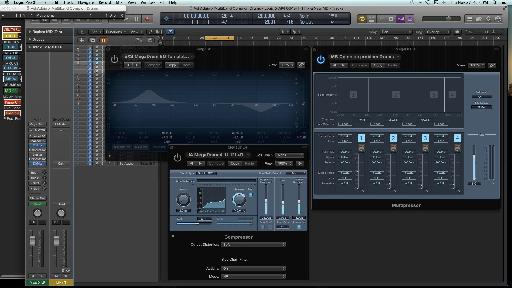 Audio Example 3: A drumkit recording with too much cymbal and not enough kick.

Many people also like to use multiband compression on vocals, where separate frequency band processing'"particularly massaging the upper-midrange band'"can help with issues like tonal variations of a singer who maintains an inconsistent position on mic, or one whose voice takes on an undesirable edgy tone when singing more aggressively.

But users new to multiband compression do need to be careful'"even a little processing can have a much more pronounced effect on both dynamics and tone than might be expected, so it pays to use a gentle hand. And as with any new toy, frequent A-B'ing against the unprocessed audio is a wise tactic, until your ears get used to the effect and artifact of multiband dynamic processors. But, once mastered, they can be a powerful tool, applied with just the right touch.

Here's a preview video from the course discussing OPT, FET and VCA modes: