All Articles Mixing & Mastering
Producer Challenge: Manual Mastering vs. LANDR Automated Mastering
Gary Hiebner on Fri, February 5th 2 comments
Language
Mastering decisions used to focus on whether you'd go DIY or send to a mastering engineer. Since LANDR, it's possible to get an automated master of your tracks in seconds. But which sounds better?

I’m always on the lookout for interesting audio software that can automate processes and was very intrigued when I heard about LANDR. Especially regarding innovations with the Desktop app. And then it got me thinking—let’s put it to the test: the manual process of mastering your own songs, versus the automated process of using the LANDR software. Here’s a fun challenge comparing the two.

First off, I’m like most of you, a home studio producer. I wouldn’t call myself a mastering engineer, but I have the audio tools to perform a master on my track.

So here comes the challenge. I’m going to manually master my own song (I’ll do two tests, one in Logic and another in Ableton), and then use the LANDR Desktop app. This is a fun little experiment to compare the two, and I’d like to get you to be involved and hear your feedback so please add comments below. If you want to find out more about LANDR check out the following articles first:

I’m going to be using the stock mastering plugins with Logic and Ableton (no third-party mastering effects), so if you have these DAWs, you can follow along. But if you’re using other software I’m sure you’ll have similar plugins to use.

I’m also going to time myself doing each master and then compare this to the time it takes to master a track through LANDR. So it will also be a measure of the efficiency of each process.

Here is my track before any mastering. It’s an 8-bar loop of one of my ‘work in progress’ songs.

So here we go, the time is 13h00. And the stopwatch begins. First I’m going to master my track with Logic using its bundled dedicated mastering plugins.

On my master output track, I first add a Channel EQ and use a low cut to roll off any low-end below 50 Hz. This just gives some extra headroom to the track. 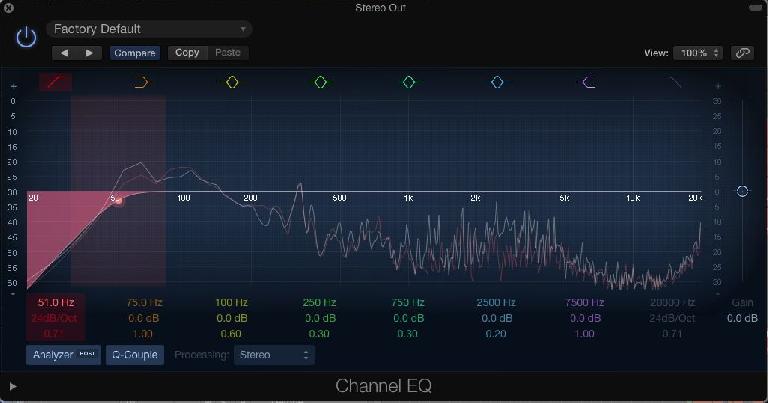 Next, I’m going to add the Linear Phase EQ. This EQ is slightly different to the Channel EQ in that it helps maintain the phase relationship between various frequencies, so it’s designed as an EQ for more mastering purposes. I’m doing a slight dip at 112 Hz as the bass frequency here seems a bit loud.

Now I’m going to do a boost of 2.4 dB at 2900 Hz, and then an extra boost at 10,000 Hz for some added sparkle. I adjust the Q values slightly for a natural dip and boost across this frequency range. Sometimes a wider Q value is better at the mastering stage. In mastering, finer cuts and boosts work much better than drastic ones. So you can always boost and then back it off slightly until you get the desired result. 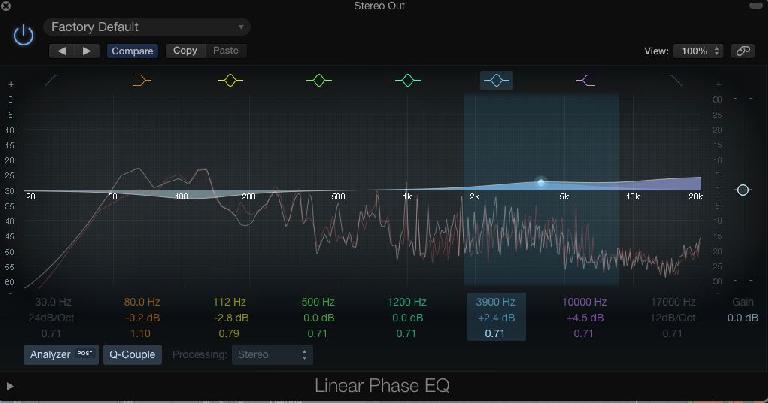 After this, I insert the Multipressor multiband compressor. I solo each band to find where I want the crossover bands to be for the four frequency ranges. On the first low band I’m gaining it a bit, for more bass, but at the same time, I’m adding some compression with a threshold of 20 dB, a ratio of 2.68 and an attack of 2.0 ms, and release of 61.9 ms. I slightly gain up band 2 and 3 and then add quite a bit of a boost on the fourth band for some extra high-end sparkle. I tweak the attack and release times on each band slightly to taste. 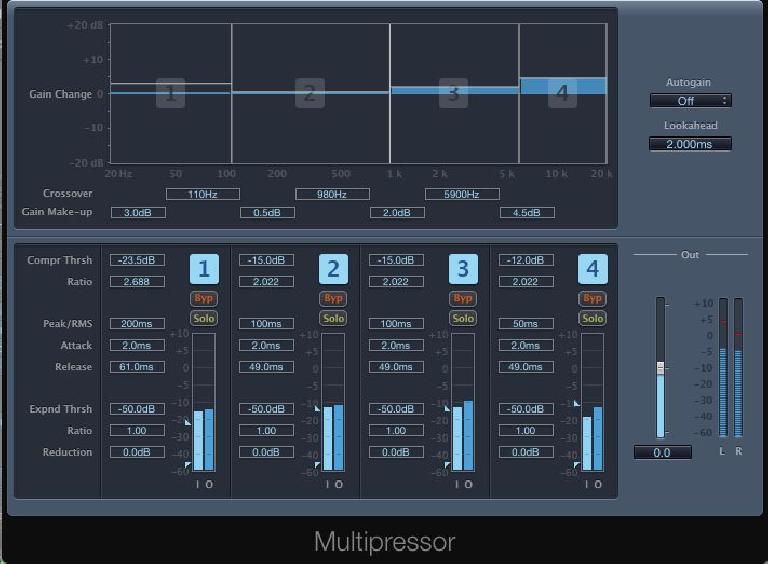 I like to add some slight reverb on my master to give a sense of space plus it helps just gel everything together. Here are the Space Designer settings I’ve used: 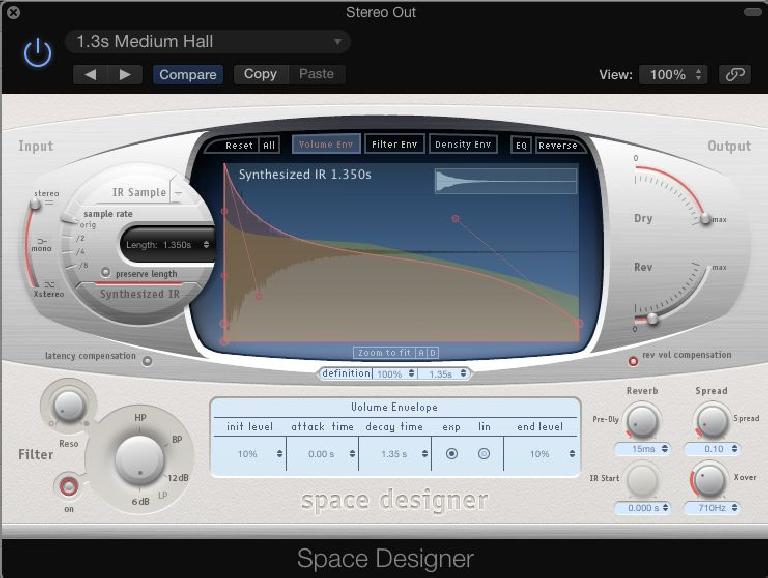 Last in the chain I add a limiter to raise the overall level of the track, but at the same time use the limiter to make sure the track doesn’t clip by applying a soft clip ceiling. The Input Scale is .8 dB, and Gain amount of 4 dB, and the Output ceiling of 0.1 dB. 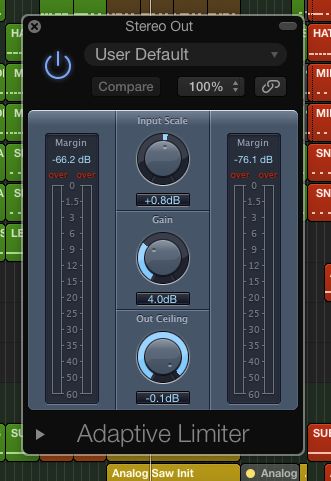 And to finish off, I bounce out the audio down to 16-bit WAV file and make sure to apply some dithering to the bounce. 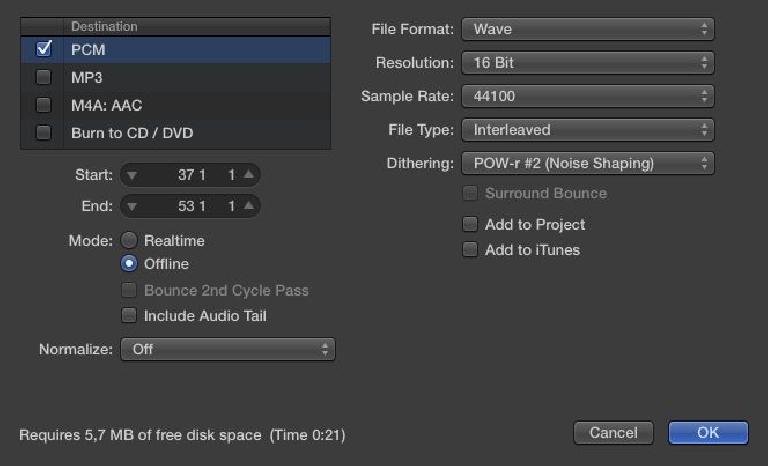 Here is what it sounds like after the Logic mastering effects.

That Logic master took about 25 minutes. It was a bit rushed. Normally I’d spend a bit more time, but this is just for demonstration purposes. Here’s a great video tutorial if you want to know more about mastering in Logic:

OK, so let’s take a coffee break and then master the same track in Ableton.

As before, I’ll be using the DAW’s bundled effects, and pretty much applying similar processing as I did in Logic. The time is 14h00 so let’s master!

First I’m going to do a low cut with the EQ Eight and cut everything below 50 Hz to clear up some headroom in the track.

Then I’m going to use another instance of EQ Eight. This time, I’m going to give a slight boost: 10 kHz region to add some sparkle to the track.

Following this, let’s insert the Multiband Dynamics effect. I’ve set my three bands by first choosing where I want my low to mid crossover band to be, and then where the high to mid crossover band will be. I then increased the low band to give some more bottom end to the sound. I also tweaked the high band for extra high-end clarity.

After this, I have added the Reverb plugin and dialed in a very simple reverb with a 932 ms delay time and have raised the dry/wet amount until it just adds some character to the sound.

And finally, I have used the Glue Compressor to act as the limiter on the end of the chain. I’ve set the threshold to about 12 dB, and then Makeup to 5 dB. I have enabled the soft clip button so that no peaks will clip in my track, but the Glue Compressor will help raise the overall volume of the track. This compressor/limiter also adds quite a nice character to the sound as opposed to Ableton’s Limiter, which is why I chose it.

Make sure to apply dither when you export out the audio. This is what it sounds like after the mastering effects:

That master session with Ableton took about 22 minutes. So roughly the same amount of time as the Logic mastering session. Now for the final step, to compare this to LANDR.

If you want more tips on mastering in Ableton, definitely check out this video tutorial:

So first go to the LANDR site and download the desktop app. You’ll also need to create an account. There is a free account version and then different versions that give you various mastered audio output file format options. Check which one suits you. When you install this desktop app, it adds a LANDR Bounces folder to your user profile.

Now any file that you add to this folder will be uploaded to the LANDR site for mastering. Then when you launch the LANDR app in your Applications folder, you’ll see the audio file uploading there.

Once your track is uploaded, you can preview the before and after of the mastering process.

You do also have three options when you click through the edit buttons: You Have Low, Med, and High intensity. I’ve chosen the Medium intensity for this demo.

When you’re happy click the Create Master, and it’ll render the mastering out on the audio, and when that’s done, you can save the newly mastered audio track.

And here is how it sounds once being processed by LANDR:

Using the LANDR app to master the track took about 7 minutes. So there is quite a drastic time difference between this and the manual mastering process.

I know that this was a very quick demonstration on the manual vs. the automated mastering process, and normally I’d spend a bit more time on the mastering process. After taking a listen to the LANDR master, and my Logic and Ableton masters, I prefer the manual masters, but maybe only just. I like the extra high-end detail, I found this a bit lacking in the LANDR. But that is just my personal preference. Others might prefer the LANDR master, and I must admit, I was really impressed with the LANDR master overall. If you’re new to the music production process, this is a great tool to use to get high-quality masters without having to know how mastering works.

So there you have it, a quick comparison between the two methods, the manual vs. the automated. The big positive about LANDR is that if you don’t know much about mastering you can use this tool to easily get good masters of your tracks, plus let’s not forget the speed—it’s great for a quick turnaround. On the flipside, the manual process gives you more flexibility over how your master sounds and you can direct the way the master goes with fine tweaks to the mastering audio tools in your DAW.

So take a listen to the manual masters vs. the automated master above and let us know what YOU think.

Gary Hiebner
Gary Hiebner is an enthusiastic South African Sound Designer and Apple Tech Head! Gary has been involved in the South African music industry for the decade, and in this time has also been involved in the sound design and music production for many advertising agencies and media houses. Gary is a devoted Logic and Ableton user, but he also dabbles in Cubase, FL Studio, Studio One and esoteric sound design tools, such as Max/MSP and CSound.
Related Videos
Comments (2)