All Articles Motion
Animating Text In Motion Part 3, Sequence Text
Ben Balser on Wed, March 20th 0 comments
Language
In part 3 of this 4-part series exclusive to the MPV Hub, Ben Balser takes you step-by-step through the process of animating text in Apple Motion 5.

Launching Motion, I'll create a new generic Motion project at 720p30 for 5 seconds. T brings up my typing tool and in the center of the canvas, I'll type some sample text to demonstrate with. I press F4 for the Text tab and in the Format section, I'll make it larger and bold. That's basically it for our sample set up, not much to it.

With the text layer highlighted, use Command-2 to navigate to the Library tab, go to Behaviors, the Text Animation collection, and select the Sequence Text behavior. Click the Apply button to add it to our text layer. You'll notice it highlights the first letter of your text layer and has some colorful controls in the canvas.

So that you understand what's happening next, the Sequence Text behavior is easy to use. In a nutshell, you animate the first letter, or glyph as they're called in typography. Then as the behavior plays, all the other letters follow along that same animation. It's quite easy, but has a lot of control built in. 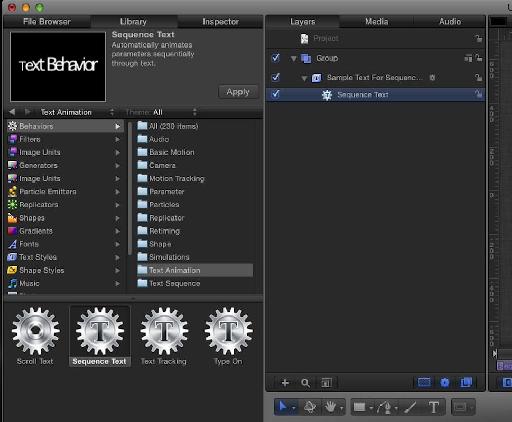 Use the green adjustment arrow on the first letter of your text to move it up and just outside of the video frame. Use the red arrow to move it off to the left of the video frame. If you see three circles to each side and above the first letter, those help rotate the letter. If not, in the Behaviors tab, the Parameter 'Add' menu, add Rotation. Open the Rotation block and use those controls if it's easier for you. 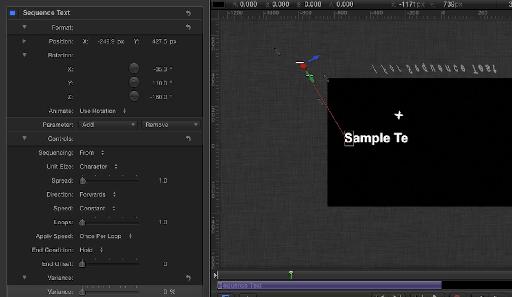 Change the behavior's duration by grabbing its end in the timeline and dragging left so it's only half the length of our project. In the Layers pen, with Sequence Text selected, use Command-D to duplicate it. In the timeline move this duplicate to cover the second half of the timeline. With it selected go to the Behaviors tab of the Inspector, down to the Controls block, set Sequencing to be 'To'. With the playhead over any portion of the timeline, use the color adjustment arrows to move it to just outside of the bottom right of the video frame. This makes the letters move from their natural position 'to' the animation position we created. When Sequencing is at its default of 'From', it moves text 'from' the animated to its default position. 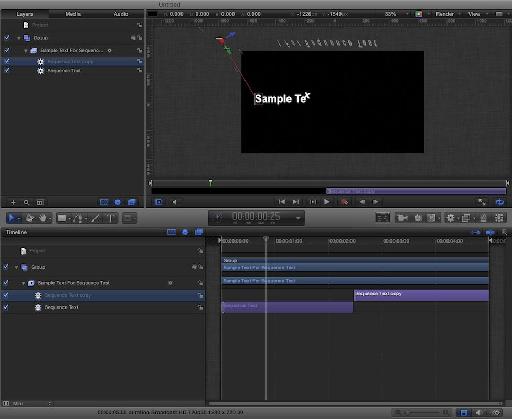 Begin playback while experimenting with the following settings. In the Controls block of the Behaviors tab, the Unit Size menu controls if only letters, words, lines, etc. sequence to or from the animation. Spread set to 0 animates one 'Unit Size' at a time. Increasing this parameter lets you get smoother animation by triggering how ever many Units you set this for to animate at the same time. Try setting this to 40 and see what happens. Speed set to Ease Both gives motion that looks more realistic according to real-world physics, starting slow, speeding up, then slowing down to its landing position. Further down, find the Variance block and for the Sequence Text Copy behavior, set Variance to 20 and Minimum to 50. This allows you to control randomness in the animation for an even better look. 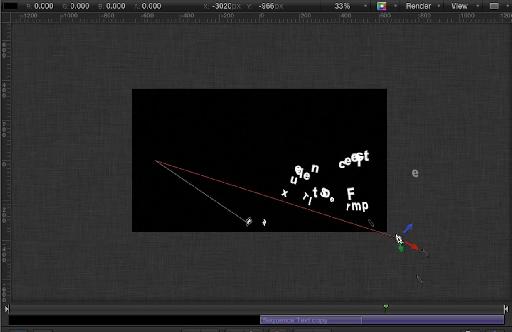 You have the basic building blocks now for using the Sequence Text behavior to create some very nice text animations. Along with using the anchor point from part 1 and paths from part 2, you now have a good tool kit for creating powerful animated text in Motion. In our final part 4 we will look at a very complex and specialized animation that will blow you away! Dream It. Do It.
Do you want to learn Animating Text?
Yes, I want to learn!
No Thanks, I just want to read the article.
Feedback
How are we doing?
We'd love your thoughts, feedback and questions regarding our new site. All feedback is appreciated!
We do not respond to this form! If you need support, please visit our support page.
Thank you for your input!
Your message has been successfully sent
Course Advisor
Don't Know Where To Start?
Ask A Course Advisor