Final Cut Pro has a suite of color correction tools which will get the job done in many situations. However, it’s quite possible, especially if you’re shooting with a wide dynamic range, to be left with an unfixable shot. While you could reach for a third-party tool, here we’ll look at how to create your own color correction effects in Motion.

We’ve looked at this before

In previous articles, we’ve looked at how to add ten easy effects to accomplish a variety of different results, as well as how to create an automatic correction for “flat” or “Log” images from modern cameras. We also looked at how to build an Adjustment Layer which can affect everything beneath it.

This time around, we’ll be focusing purely on color and light, and create different effects for specific types of corrections. You’ll almost definitely find something useful here.

Motion invites you to create a new effect as soon as you open it up.

While we’ve gone through the process of creating an effect in a previous article, we’ll recap it briefly here.

To make each these effects, we’ll open Motion, create a new Final Cut Effect, then add effects from the Library onto the Effect Source in the Layers panel. The Effect Source is a stand-in for the video you drop the effect onto, but the frame size and frame rate don’t matter.

Right-click on the name of any property to publish it.

Within each effect you add, visit the Inspector, then right-click on the name of any effect that should be changeable in FCP X, and choose Publish. It’s sensible to keep the controls as simple as possible—only publish what you need to. With all that in mind, let’s look at what you’d need to do to control different parts of the image, and why the Color Board can’t always get the job done.

Here’s the Exposure tab in the Color Board.

Exposure is one of those areas which the Color Board covers pretty extensively. In its Exposure tab, Globals affect everything, while the shadow puck locks highlights, the highlight puck locks shadows, and the midtone puck locks both shadows and highlights, pushing exposure within the existing image. So what’s left?

Contrast is a great place to start, publishing at least the first two properties.

First—the easy one. Create a new Final Cut Effect, then go to Library > Color Correction and add Contrast to Effect Source. Publish the Contrast and Pivot properties, and also tick Smooth Contrast. Save the effect, named “Contrast”, in a Category of your choice—I prefer “Experiments” until it’s truly final.

That effect gives you a rough “S-Curve” equivalent with Contrast controlling strength and the Pivot controlling the center of the curve. For something fancier, try this instead.

Create a new Final Cut Effect, then select Effect Source and press K to create a clone layer. Right-click that clone and choose Blend Mode > Overlay. Select that clone layer, and in the Inspector, right-click on Opacity and choose Publish. Save the effect as Contrast Overlay. At full strength, this effectively applies the Overlay blend mode, increasing contrast in a slightly softer way than the Contrast effect. Publishing Opacity lets you turn it down interactively. In fact, you may prefer to set the default value at much less than 100%, or even 0%.

Both of these effects let you leave the highest and lowest parts of the image exactly where they are, and massage everything else towards or away from those points. Handy stuff. If you want even more control, you can add Levels, which gives quite a selective level of control. We covered this in a previous article.

Let’s just darken the highlights (before).

Let’s just darken the highlights (after).

Still, even Levels can't adjust only the highlights or only the shadows in an image. If an image has nearly-blown-out highlights it can be hard to control them while lightening any darker foreground objects.

To each clone, we’ll add Contrast and Gamma, both quite useful. Visit Library > Filters > Color Correction, and drag Contrast, then Gamma to each of your two clones.

Each of these new layers needs to be limited, so that only highlights or shadows are shown, and everything else remains visible thanks to the original layer below. From Library >  Keying, drag Luma Keyer onto both clones.

The highlights clone will look like this when finished.

You’ll now need to show only the highlights and shadows respectively, so drag the top and bottom sliders in each until they look roughly like the diagram. Unfortunately there’s no numeric way to change these settings, so you’ll have to eyeball it.

The shadows clone looks the same, but with these Luma Keyer settings.

Finally, tick the Smooth Contrast checkbox in each clone, then right-click and publish the Contrast, Pivot and Gamma sliders. In the Layers panel, click on Project, then in the Inspector, click on Project there too. Rename the sliders by double-clicking and adding “Highlight” or “Shadow” to each name.

That’s all for this one; feel free to adjust the Luma Keyer ranges if they’re not wide or narrow enough for your tastes.

Controlling Color with Temperature and Tint

The Color Board is good, but not always ideal. And while the Hue/Saturation effect can sometimes be used to correct a white balance that’s wildly incorrect, it doesn’t always do what you want either. Instead, Temperature and Tint sliders can be a convenient way to neutralize color shifts, and it’s easy to make your own.

Publish the I and Q, but rename them Temperature and Tint.

Create a new Final Cut Effect, then look in Library > Color Correction and drag YIQ Adjust onto Effect Source. The YIQ color space is interesting: Y is Luminance (or brightness) and nothing you can’t change with the Color Board. But I is effectively Temperature, and Q is effectively Tint, so right-click each and Publish, then change their names in the Project pane of the Project settings.

Saving that Effect as Temp-Tint is easy.

Save the effect as before. When applying it, you’ll notice that the sliders are quite powerful—a little goes a long way. One way to “gear down” is to hold Option while dragging on the numbers, and ignore the sliders completely.

Before dimming the highlights, in Shibuya.

After dimming the highlights, in Shibuya.

While the color board is great, it certainly has its limitations. For fancier adjustments, deeper control over contrast, temperature and tint will make color correction in FCP X much easier and much more powerful. If you have any other recipes to contribute, please leave them in the comments. 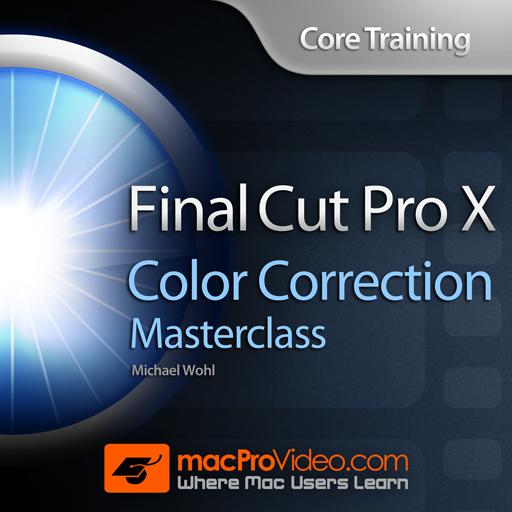 Dream It. Do It.
Do you want to learn Core Training: Color Correction Masterclass?
Yes, I want to learn!
No Thanks, I just want to read the article.
Feedback
How are we doing?
We'd love your thoughts, feedback and questions regarding our new site. All feedback is appreciated!
We do not respond to this form! If you need support, please visit our support page.
Thank you for your input!
Your message has been successfully sent
Course Advisor
Don't Know Where To Start?
Ask A Course Advisor