All Articles Motion
Motion: Rise like a Phoenix (from Conchita's 2014 Eurovision Performance)
Iain Anderson on Mon, May 12th 0 comments
Language
If you saw the 2014 Eurovision Song Contest last weekend, you'll undoubtedly have been stunned by the entry from Austria's Conchita (the eventual winner) for her motion graphics... and song of course! 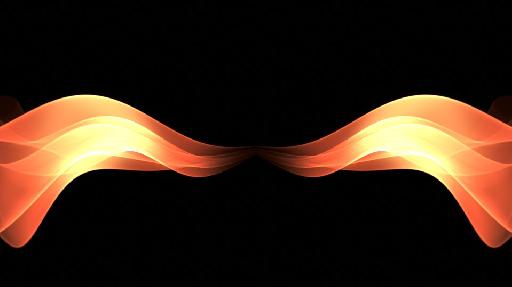 Many of you will have seen Austria’s Conchita Wurst take out the 2014 Eurovision Song Contest recently in a Bond-theme performance, and if you’ve an eye for motion graphics, you’ll likely have admired the incredible stage and its wonderful graphics behind. While most of the acts had a pretty amazing visual display going on, using two massive, sometimes-transparent screens behind the stage or even larger ones way behind it, Conchita’s stood out because I recognised the key part of its main effect, and how to make it.

The winning performance is linked from this page:

Watch from about 1:55 for the flaming phoenix wings behind the singer, which kick in at just the right time to sell the song. While in general the production at Eurovision is excellent, I can’t remember a time when motion graphics have added so much to a performance, so quickly. (It’s worth noting that in the original, real flame elements were composited over the synthetic visuals, and of course, you could buy stock footage or shoot your own to complement what we’ll do here.)

(Note for those unfamiliar with Eurovision: it’s a Europe-wide song contest where craziness is rewarded, where too much pop is barely enough, where mid-song key changes are nearly mandatory, and where the commentators don’t take it too seriously.)

Interestingly, Conchita has used volumetric flows before, in an Austrian talent show called “Die Grosse Chance” way back in 2011 [] (found here)—so I wonder if the same designer is responsible?

In any case, while I’ve written about how to make volumetric flows here before, this time we’ll be taking a very specific look at how to create a specific result.

Create a shape in a new project

File > New to get started, then make a new Motion Project at 1080p, at whatever frame rate settings you prefer. Then the fun part—grab the Bézier tool and click-drag a few points about to make a scribbly shape with a couple of internal loops. You can change this later, but for now just make a random, scribbly blob. 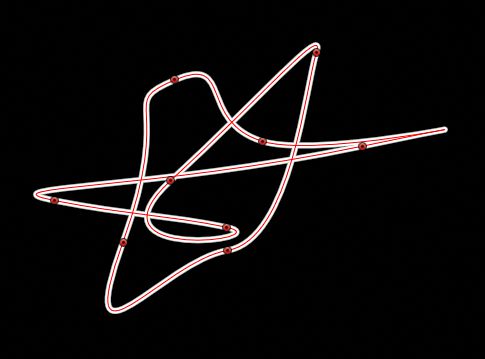 This is the kind of thing you want to draw—use the Paintbrush Tool if you prefer.

You’ll also want to make sure that you’ve used a thin stroke width (4-8 px) and white as the stroke color.

With the shape selected, press L to replicate the shape, then head to the Inspector and change a ton of settings. You can click on the numbers then retype, or drag sideways on the numbers to change them, but avoid the sliders—they won’t always reach the right values. Set: 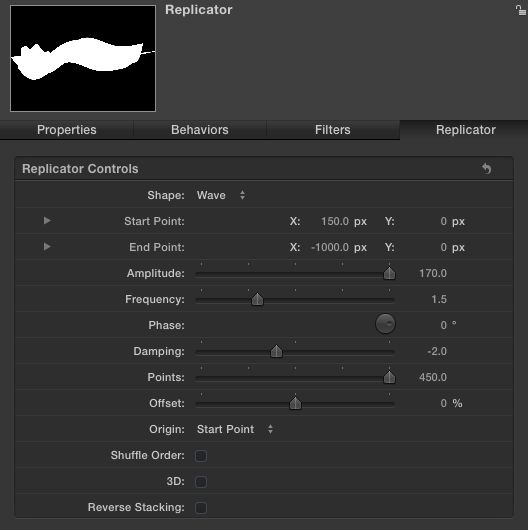 That’s a good start, but we need make it look more like flame, and we’ll need to change the Cell Controls next. A great start is to change Color Mode to Over Pattern, then choose the Burnt Ember preset from the menu to the right of the Color Gradient option. After that, click the Additive Blend checkbox to make it all make sense.

The flame gets started. 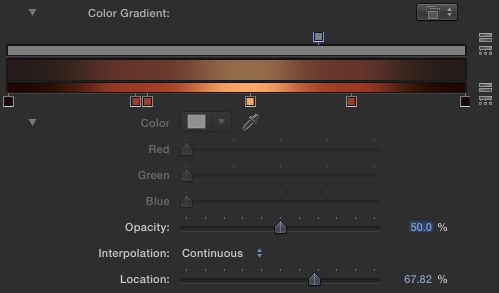 The flame dies back a little.

Now that you can see it coming together, you’ll likely want to adjust the scale of the effect, to make it start small but end large. Set the Scale to 10%, but the Scale End to 1800%. 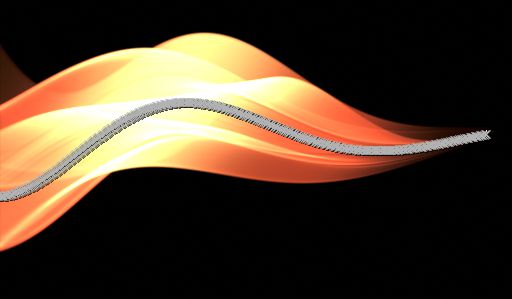 We need two parameter behaviors to make it flow. Right-click on the word Angle (not the value) and choose Add Parameter Behavior > Ramp. 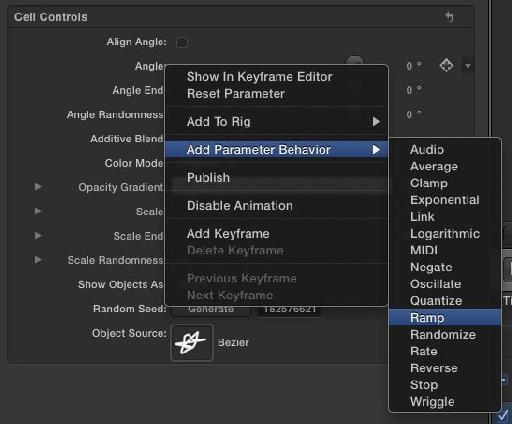 Here’s how you add a Ramp to a value. 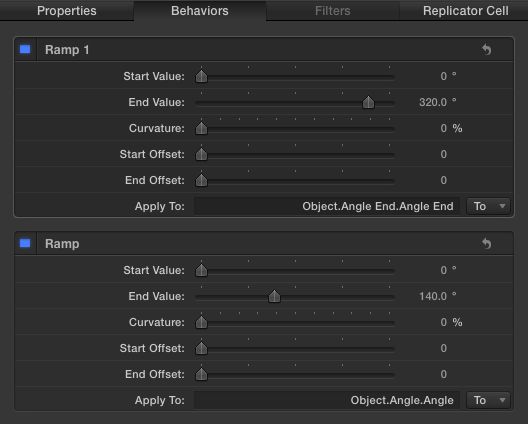 Reflect the wing to make two

In the Timeline or the Layers panel, select the Group that encloses the Replicator. In the Group panel in the Inspector, tick Fixed Resolution to prepare for the next stage.

Fixed resolution will make this next part much easier.

On the left of the screen, click Library, then Filters > Distortion, and drag the Mirror filter to your Group. Select the effect in Layers, and you should see that the reflection point is right in the middle of the screen, but that everything has gone black. It’s reflecting the blank right-side of the screen instead of the left. To change this, set the Angle of the Mirror to 180°, and now you have two. 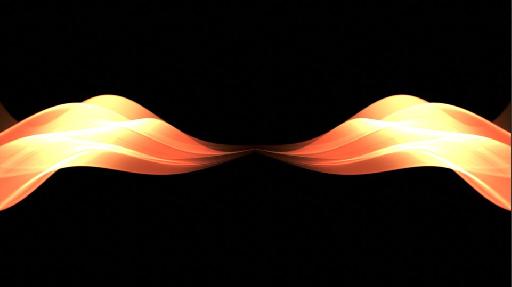 Click back on the Replicator itself, then expand the End Point parameter by clicking on its disclosure triangle. Right-click the parameter name “Y” (not the value) and choose Add Parameter Behavior > Oscillate. In the behavior settings which appear, set Amplitude to 250 px and Speed to 8. 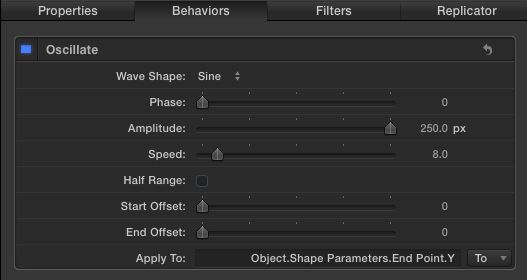 Oscillation settings to make the wings flap up and down.

If it doesn’t quite look right, try a different bézier shape as the source for the replicator. Grab the Bézier Tool, then draw a medium-sized shape of up to ten points or so. Select the Replicator, then scroll to the very bottom of the Inspector to see  the Object Source image well.

Drag your new shape here to change the flames.

Drag your new Bézier shape to the image well, then hide the original by unchecking it in the Layers panel. You’ll see entirely different flames obeying the same rules.

This is only an imperfect starting point, and you can play with the effect all day. Try tweaking the X and Y of the start and end positions, the number of points and colors, play with different parameter behaviors, even different replicator modes. You’ll get great results every time, and an instant go-to option when you need an animated background. Now all you need is someone to stand in the middle of the screen and sing. Easy, right?

Dream It. Do It.
Do you want to learn Working in 3D?
Yes, I want to learn!
No Thanks, I just want to read the article.
Feedback
How are we doing?
We'd love your thoughts, feedback and questions regarding our new site. All feedback is appreciated!
We do not respond to this form! If you need support, please visit our support page.
Thank you for your input!
Your message has been successfully sent
Course Advisor
Don't Know Where To Start?
Ask A Course Advisor